So this week, I decided to make things hard on myself and use an esoteric language. I chose LOLCODE since I've never used it before, and it seems pretty popular.

Little did I know, LOLCODE has no support for lists.

So, this weekly became quite a challenge — how can I solve a problem which requires some sort of list-like data structure to solve (to implement a uniqueness check) with a system that has no lists.

Well, my solution was to realize that what I just said was a lie. There are lists in LOLCODE — yarns (or, as boring normal programmers call them, strings). 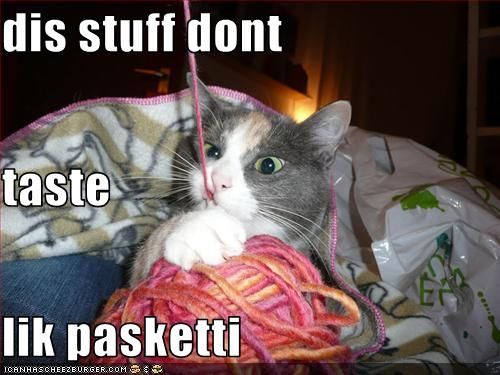 So my task became a) encoding a list of numbers in a string,and b) figuring out how to compare a number to all the numbers in that "list", and check if there is a match.

These things probably don't sound too hard, but this is an esoteric language so of course it was difficult. The first goal I accomplished by giving each number an arbitrary precision — 10 digits (which seems big enough that you won't run out of space for something like this challenge while keeping the performance modest). I could then simply pad each number up to 10 digits with leading zeroes, and it becomes possible to get any number out of the list. The next goal was not as easy, but through a lot of loops and fun names like LAZERPOINTER and DIJIT I managed to make it work.

So here it is, a bunch of unreadable code that sounds like your cat wrote it, complete with LOLspeak prompts. It doesn't look like much, but don't assume the complexity of an esoteric program based on its size :D

Note 1: Don't give it big numbers, due to the obvious performance downsides of this approach it will get really laggy. Anything over 20x20 starts to get laggy, so I'd keep it around that range at most. (If you're wondering, under no circumstances put anything greater than 99999x99999 — it will max out the 10 digit limit and be frozen forever!)

Note 2: If nothing shows up at first, re-run the program. It appears that sometimes repl's lolcode interpreter doesn't run the first time.

Creative way to do it xd, I just cheesed it using set in c++

@maxyang Heh, I started to do it in Kotlin to learn a new language but it was too easy lol

I upvote for yer pictures XD

@HahaYes What do you mean?

@fuzzyastrocat ree is this new month

@HahaYes No, it's still part of the same weeklies (this one just got delayed I think)

lolcode is actually so underrated
more people should use it

@Srikar2008 If they add any kind of list/struct/array data structure to it, then yes.

wtf is the code?

plz trai to understand, skwid an cat can be fwiend u noe

@fuzzyastrocat Oh, quick question if you don't mind, I finally made a recursive decent parser:

So what do I do now? I kinda have 2 questions

@DynamicSquid 1. If you do it the way you're doing it not, you'd put that in TravelTree. However, I'd strongly suggest making each AST node have an eval method which does what your TravelTree function does (so remove TravelTree). Then, instead of calling TravelTree, you say rootNode.eval(), and it calls eval on its subnodes (which may call more evals on their subnodes, etc) and then it adds/multiplies/does whatever with the return values.
2. If you're doing an AST, make the entire program be represented as an AST! The AST should be your only representation of the entire program once you've parsed the tokens.

A final note: Your recursive descent parser works, but it's kinda ugly and will get really ugly the more you add to it. I'd suggest each task to different functions — rather than try to explain that here, I will (once again :D) direct you to my Sea parser.

I'm kinda busy right now, so I don't have the time to create a full example in C++. When I get the time (which should be soon), I'll make an example to help illustrate my point better.

@fuzzyastrocat oh thanks for the explanation! about making the entire program into an AST, I've been looking at your lang and a couple others from the game jam, and I noticed they have something like this:

Am I getting this right?

@DynamicSquid Yeah, that's the gist of it. However, two things I notice: An Expression might not be just a single token, so I'd rename that to something like Atomic. Also, in the IfStatement, your vector<Token*> code; needs to be something like vector<Statement*> code; where Statement* is the base class for an AST "statement" node.

@fuzzyastrocat ah.. I see. last question though, the parser just generates an AST for the code, and the interpreter actually traverses the AST and does stuff right? or can it be a mix between both?

@DynamicSquid You've got it 100% right (don't mix!). The interpreter "pipeline" kinda looks like this:

Notice how each section is like a "black box" which gets exactly 1 input and produces 1 output.

@fuzzyastrocat gotcha! hmm don't have school tmr, so time to code until 12pm!

@DynamicSquid Ha! Hope you get a good sleep after :D

@DynamicSquid It's this thing your body does to uselessly waste a bit under half the day. Yeah, I don't know why I keep doing it either.