Have you ever wanted to write down something and then copy and paste it to a network? Use SuperType!

@JWZ6
thanks so much!

I literally just started!!! Why are you trying to report me?

@CodingCactus could you check this out?

@Crosis why would you ping cc?

@RayhanADev mods get pinged every 10 minutes so it wont matter

@NathanTodd2 what you mean??? i've done nothin your acting like i made few hundred accounts and started boting

@NathanTodd2 i may be getting this wrong but could you explain ban evasion?

@Broken24 making an account to get around or avoid a ban

@NathanTodd2 1 i deleted the old one 2 i've done nothing and if i did it must have been on mistake and i am so sorry i am not one for fights if you wish to proceed please do continue but i think im going to act like a man and not keep going with this k good if i get banned again ok great then i know it was my fault however i don't quite know yet so ima just go with i must have made some mistake if so sorry again good bye gentlemen and gentlewomen i am sorry for my actions and will try not not make it happen again.

@NathanTodd2 shut up do you have any proof

@ch1ck3n
I'm actually not trying to get anybody banned...
i have a headache now...

@NathanTodd2 stop making reports of people, nobody likes someone pretending to be a moderator
if you behave like that the best case scenario is that the mods will ignore you, worst case you'll be banned

shut up do you have any proof

Cork is an impermeable buoyant material, the phellem layer of bark tissue that is harvested for commercial use primarily from Quercus suber, which is native to southwest Europe and northwest Africa. Cork is composed of suberin, a hydrophobic substance. Because of its impermeable, buoyant, elastic, and fire retardant properties, it is used in a variety of products, the most common of which is wine stoppers. The montado landscape of Portugal produces approximately half of cork harvested annually worldwide, with Corticeira Amorim being the leading company in the industry. Cork was examined microscopically by Robert Hooke, which led to his discovery and naming of the cell.

What does the name Poog mean?

One of these is used in a military setting. In this case “POG” can mean “person other than grunt.” A grunt is a frontline soldier who does something dangerous or combat-related so here a “POG” is someone who performs some supporting duties but does not really fight or march like the others

it do be kinda sus he is a default and only 14 rep of witch all came from this
edit: this is also his first repl BTW @Crosis this is kinda sus right
edit2: 8 comments and 15 upvotes hmm
edit3: formatting for code is perfect witch for a noob is impossible
edit4: repl made 1 day ago and this was posted in same day

@NathanTodd2
I am experienced with HTML and CSS. I followed a tutorial for the JS Code but I just started Repl.it. I'm sorry if I am breaking any rules.

@Kizuo you aren't breaking rules, it's just some random idiot accusing you, likely because he's jealous of such a popular post.

@firefish
I agree, some people just start social media or Scratch or repl.it and get a lot of votes, and some don't. I actually do Scratch too, and the link to my profile is
Delta135

@NathanTodd2 shut up he might have 5 years of experience but only joined replit a few weeks/months/days ago.

@ch1ck3n
I started programming in 2017, doing Scratch for a while and then I made my current Scratch account. 4 years later, in 2021, I made this replit.com account and now it is doing surprisingly well!

@NathanTodd2 you idiot why did you delete those comments on the repl's spotlight page its true you really just want the attention you just reported @Kizuo for no reason. you can't delete this comment can you. Why did you have to do this you uncivilised person

@Kizuo Nice job! I would suggest adding a feature that makes it so the button appears "toggled" when the user clicks, that way you know if it is in bold/italic or not, but otherwise, I would say you did great!

Also, maybe work on the CSS a bit, it looks a bit rushed

@NathanTodd2
I am real. Stop accusing me! I love HTML!

@ch1ck3n
Nope, not a bot. This was tedious to make but with the help of CTRL-C and CTRL-V, it cut the time required for writing the code in half!

I'm on your side 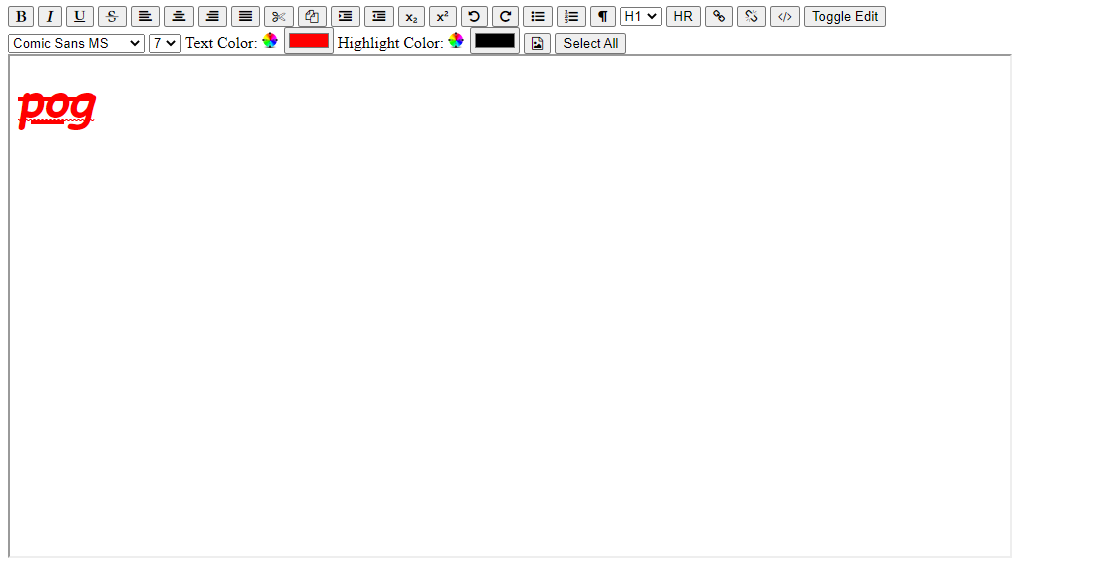 @ch1ck3n
Cool! I actually uploaded a weird photo of a Newfoundland dog to SuperType and it showed! Thanks for checking this out!

Its awesome bro me updootin