Welcome to the Skyblocks Calculator by Sub01!

What does this calculator offer?

A basic guide on using the calculator!

As some may wonder, HP and Enemy HP is needed for the Giant Killer and Execute enchants!

You can also check your base ability damage by checking your weapon lore!

The 4000 number is the base ability damage!

Here are all the commands for Ability Damage!

There will be several options in the beginning of the code where you will have the option to input the hours/time your minions are running!
The commands are:

As for the minion tier, Roman Numerals is currently not supported in the code but will be in the future!

Currently, the code accepts only digits such as 11 instead of XI!

As for the price, only put down the price that the item the minion produces such as 5 for snow minions, as it produces snowballs!

Don't add the coins as well right after the price since it only accept digits!

Also, make sure that the price in the beginning is inputted as 0 if the minions are:

Here are the current list of commands for minions that starts with 2 words or nicknames!

Ender or ender for Enderman Minion

Fish or fish or Fishing or fishing for Fishing Minion

Congrats! You managed to finish the manual for this calculator! More content will soon be released by the passing days and weeks!

I hope you will find this calculator useful in some way!

Well, the code will also include these instructions as well so feel free and find out the commands as well, listed under the question prompt of the code!

Feel free to check out my thread as well on The Hypixel Forums!
https://hypixel.net/threads/skyblock-skycalc.3606603/

Hmm... Well, try reloading the website...
You should be able to get this... 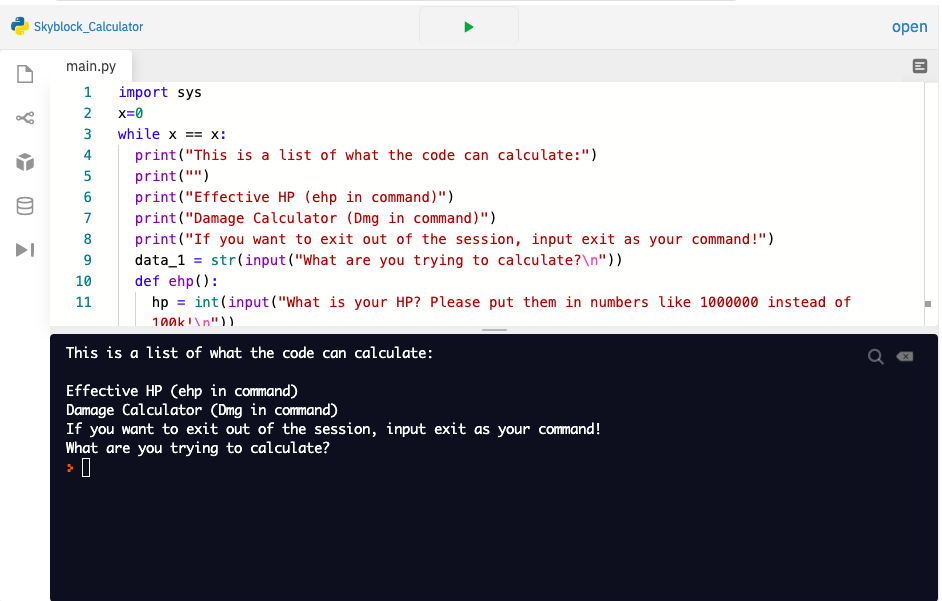