My submission for the KaJam Game Jam! 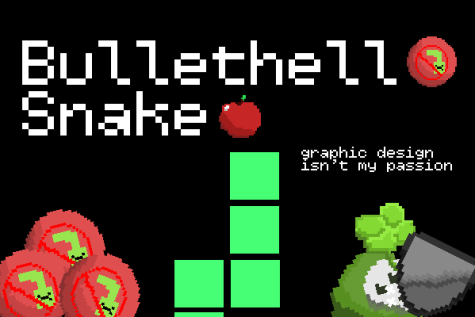 A game for the Kajam Game Jam in which the game is a twist on the classic game, Snake.

You start the game out by playing basic snake, however, there are bullets you must dodge, and you can dodge them by moving swiftly around them or using focus, which slows down the speed of bullets. Fruits occasionally spawn on the map too, here's an explanation of what the three fruits do:

Apples are the currency of the game, you can use them to buy upgrades to make the game slightly easier.

Pears allows you to recharge your focus by 5%.

Bananas have a 10% chance of spawning, and they give you life when eaten.

Getting hit by a bullet depletes your length by 1 until you're at 1 part only, to which then it'll kill you, but hitting a wall or yourself instantly kills you. Your length & focus are the only things saved throughout every level.

You get score by collecting fruits & completing levels, your highest score is displayed on the title screen!

Developed by Juan Pichardo (me)

Incredibly addictive!
Really love this one! my only advice is maybe make it more clear that the bullets are harmful? They kinda look like apples which might throw off new players. Perhaps try doing more simple spike triangles?

@ILuvLitten Yeah that seems like a more viable option to indicate whether an object is harmful, it's very hard to tell but the bullets have pixel art of a dead snake on it!