Hello there, my last tutorial was a flop so I'm going at it again this time making sure I get all my facts correct

Today we are going to learn about Bubble sorts, a sort (commonly known as a 'Sorting Algorithm') is basically an algorithm that arranges elements in a particular order. You will learn more about this in Computer Science.

Some more info on Sorting Algorithms:

A couple of points on a bubble sort:

So what is a bubble sort and how does it work?

Bubble sort, sometimes referred to as sinking sort, is a simple sorting algorithm that repeatedly steps through the list, compares adjacent elements and swaps them if they are in the wrong order. The pass through the list is repeated until the list is sorted.
Now a bubble sort is not an efficient sort for plenty of reasons and you would be better of using another sort, its also inefficient in sorting large data sets, its performance is not great and is primarily used in education. However the Bubble Sort is great for teaching beginners algorithmic logic.

That was a pretty simple example, well in mot cases the list will have a higher count of values (in most basic examples 10 numbers are normally sorted) and the numbers may be more randomized.

Yes I know thats a terrible example but thats typically the logic behind the
algorithm.

Now, nothing happens in the first two value comparisons because as mentioned before they are already in the correct order.

Back at the start of my programming journey I created [this] (https://repl.it/@k9chelsea2/bubble-sort-example#main.py) bubble sort example, now I didn't understand what was going on with the code because I was literally just doing it as an assignment and to be honest I still don't its been ages since I've used python so :/. But anyways I have linked a bubble sort down bellow (its in C++) and feel free to fork the repl and play around with the code, mess around with the values etc, you can also find many tutorials online on how do create a bubble sort in you preffered language.

A bubble sort is not efficient for big data sets and is not too efficient but it does the job, its also pretty slow compared to other sorts. If you want to learn more simple sorting algorithms the bucket sort or the selection sort are there. Searching algorithms are also good algorithms to learn, specially since its used in everyday programming.

Any feedback is appreciated and I hope you learnt something new

too many lines lmfao 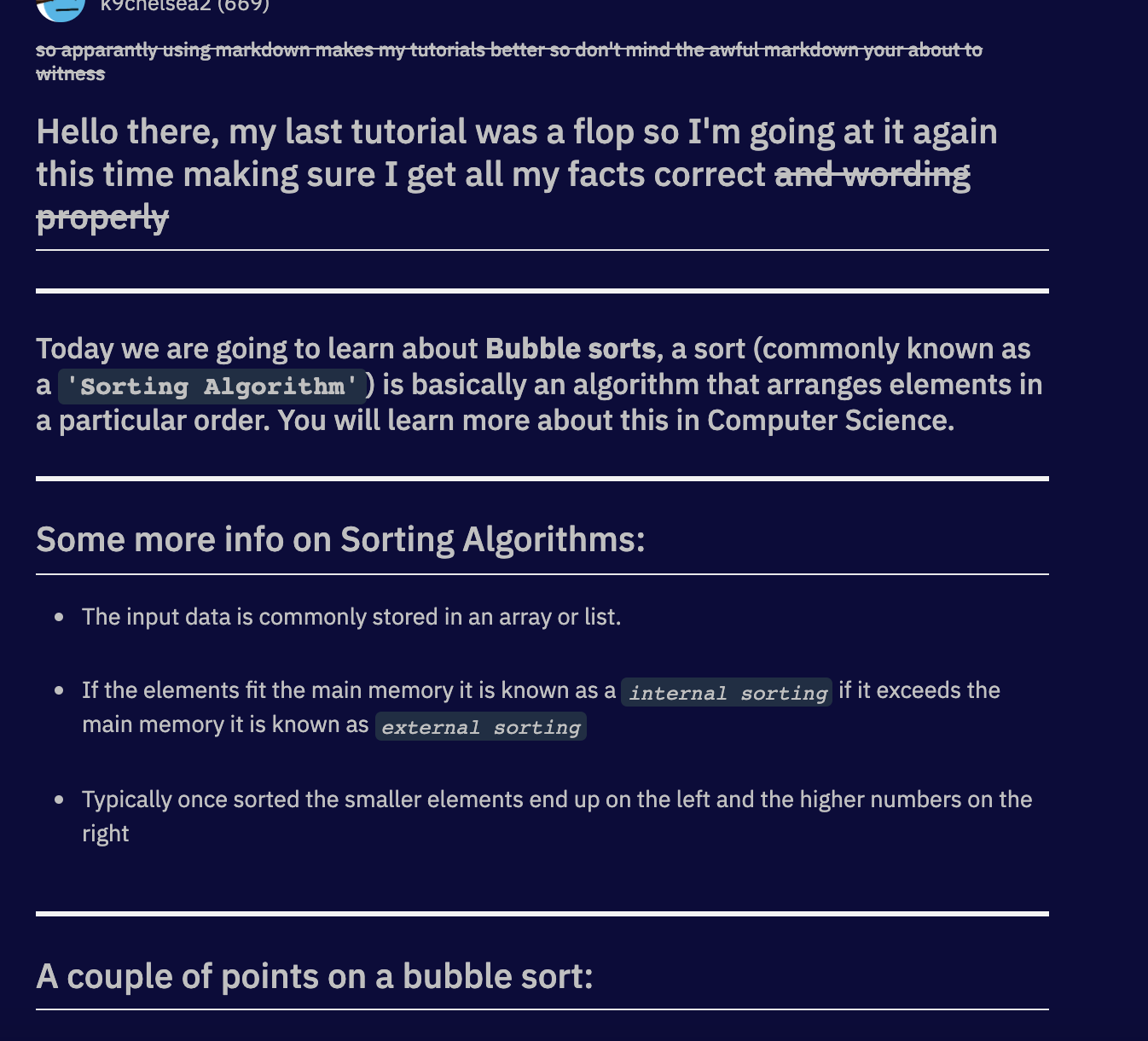