Can you report someone for doing inappropriate activity in someones repl?

My friend @GameDev46 had a site named Chit Chat. Some guy named @YodaCode came on and spammed inappropriate stuff everywhere. I was wondering if you could report someone for their activity because this guy honestly deserves to get banned.

Chit Chat (we are currently spamming it to prevent his scripts from loading): https://replit.com/@GameDev46/Chit-Chat

I mean, you aren't required to do so, and in many cases the person will get off with a warning. But that's a step closer to them being completely gone from messing with anyone again. So, I'd advice taking a step up, reporting them to a moderator, and go on your way and either fork the repl and fix what was wrong with it or well sadly..start from scratch again.

@MocaCDeveloper how to report i literally cant find any links to report.

you can’t report another user directly through the webpage. you have to ping a moderator.

All of you are idiots lol.

Lmfao. This is funny. For the record, I was not trying to be "rude" when I sent the messages. The website was already being torn up by bots and what I did really didn't make a difference. And, I was just posting my favorite CSS stylesheet. 🤪 I wasn't planning on it interpreting the CSS and actually ruining the whole website due to XSS attacks. What I did was perfectly fine, and I could post the same thing here and it would be fine. The problem was that it interpreted the CSS differently, as well as all of the HTML, CSS, and JavaScript. Be glad I discovered that you could redirect before someone else, otherwise it could've been much worse sites than my https://yodacode.repl.co website. Oh, and, you can download a .txt file of all the passwords and that's not the best security practice either.

Note: If you found this answer helpful, please mark it as correct. 🤪

@YodaCode Our bots were spamming to stop you from breaking the site.

And what you posted was clearly against the rules.

@YodaCode If it wasn't against Chit Chat rules, it would still be against Replit rules.

@CosmicBear Do you have a Discord? I'm tired of using Replit for talking. YodaLightsabr#6565

Or, you know, you can just not do anything of the sort since you knew what was going to happen, and simply let the people be without the urge of wanting to do dumb stuff like..well..whatever it is you did.

As for @CosmicBear, bot spamming to stop someone else isn't the right thing to do. You too could get IP banned from repl.it, which would be unfortunate for you, however.
I mean yes, you could talk to moderators as to why you did it, but odds are, they won't forgive you. Spamming is spamming, being rude and having the urge to wreck peoples projects is entirely of the same aspect as well as spamming.

It's just no need, whatsoever, no matter the cause or reasoning behind it.

@MocaCDeveloper He was advertising his own stuff on Chit Chat and I have more screenshots. 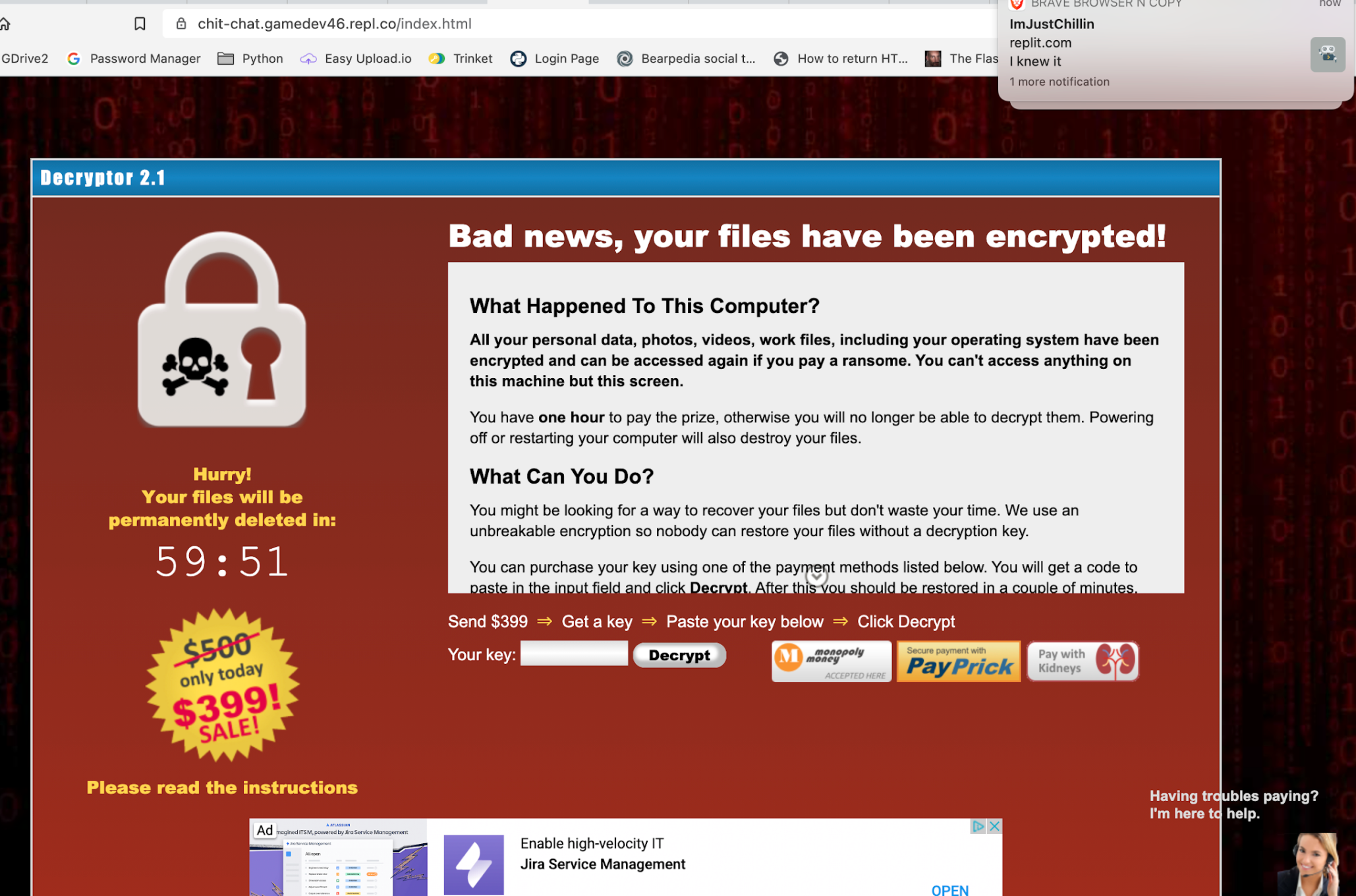 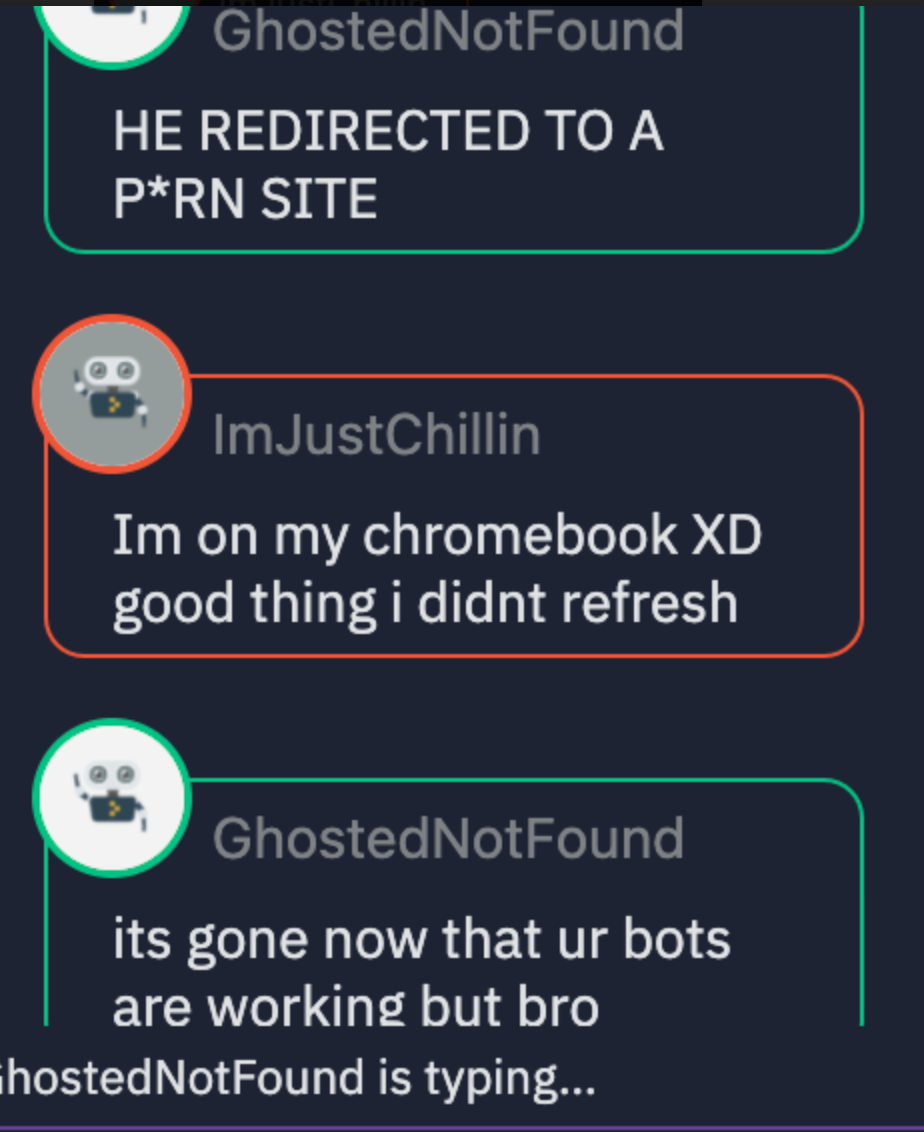 I have another screenshot where he changed the webpage to have bad words next to all the messages.

Well this is not my problem sadly. But I'd advice pinging either CodeLongAndPros or Drone7!

And wow that is very inappropriate especially for a website that has some kids on it.

@GhostedNotFound @CosmicBear Lmfao. First of all, I never redirected to a p$rn site. I would never do it, and I was worried that someone would reverse the attack on me and redirect ME to a p$rn site, which was why I wanted people to be aware. Second, https://geekprank.com is not my website. It's a prank website. Check it out for yourself.

And wow that is very inappropriate especially for a website that has some kids on it.
I wasn't breaking any Replit rules. I was just sharing my favorite block of code. It's not my fault that your dumb website actually executed it.

@GhostedNotFound Pingus Pongus.
I'm not sure how this works, as it's an external site outside of replit's control.
You should probably do contact.moderation.repl.co and see what happens. I can't use the discord so either ask a team member or cite the tos

@CodeLongAndPros Don't put them down? Tons of passwords just got leaked and I know some people out their used their Replit username and password. Leaking passwords isn't allowed under the ToS, now, is it?

@YodaCode bro you linked to them and then told people how to get the passwords pretty sure you still broke the rules.

@YodaCode It's not, in fact. If I catch someone leaking passwords I'll ban them.

@CodeLongAndPros Ban them? Because they leaked passwords? Nobody cares about the stupid chat thing anymore. A ban won't stop someone from leaking passwords. Passwords shouldn't even be available to begin with!

@CodeLongAndPros The absurdity of this thread. Web security isn't a joke, and for someone to be storing passwords in an insecure manner without making it obvious to the end user can even be a federal crime, dependent on jurisdiction and context. To not have password security requirements in your ToS is a complete shock - in the case of Chit Chat, all it'd take is a malicious attacker to decode the passwords using the code provided by Chit Chat itself, and be on their merry way with a new password list to append to their (potential) wordlist. Adding onto that, kids would've put their real passwords onto the site, so not only would their Repl account get pwned, but their gmail, their Roblox, et cetera. All of these factors, just because an incompetent developer couldn't be bothered to audit the security of their site.

@ColdDev Thank you for having common sense. Bringing the issues to GameDev46's attention clearly wasn't working, so I had to do something to get him to listen. Attempting to ban me from Repl for trying to fix security issues before they cause something bad is just crazy.

No... but you can tell him to remove those messages if he's your freind