Hope everyone is doing safe and well! It's February, and the whole month of February is Black History Month!

After an assembly on racism (that was unfortunately zoom bombed) and a U.S. History report, I had the idea to make this Black History Month site which shows some important Black people who changed history. I also took this time to practice a bit of HTML CSS (though it isn't thaaa good lol).

What is Black History Month?

Black History Month is the annual celebration of achievements by African Americans. It is a period of time where to recognize their important role in the United States history.

How did it start?

So in September of 1915, the historian Carter G. Woodson as well as the minister Jesse E. Moorland created the Association for the Study of Negro Life and History (ASNLH) which was devoted to research and and promote achievements by people of African American descent.

In 1926, the organisation chose the second week of February (which coincided with Abraham Lincoln's, 16th president of the United States, and Frederick Douglass', an abolitionist, birthdays). This event inspired other schools and communities in the whole nation to organize local celebrations, with lectures, performances, and more.

In the following decades, mayors of cities began to also recognize this Black History Week, and in the 1960s, with the civil rights movement, it evolved into Black History Month.

What's this site about?

This site talks about and shows 19 important African Americans who played an important role in the United States. It'll show their name, a picture of them, who they were and a quote.

You might recognize and know some of these people, but some of them might be new to you! There shall be civil rights activist, singers, sports players, buisness owners, etc. You'll see familiar names like Martin Luther King Jr, Michael Jackson, and Maya Angelou, and some lesser-known folks like Robert Abbott, Madam C.J. Walker, or Thurgood Marshall.

You can also hover over the different textblocks and images to see them move. 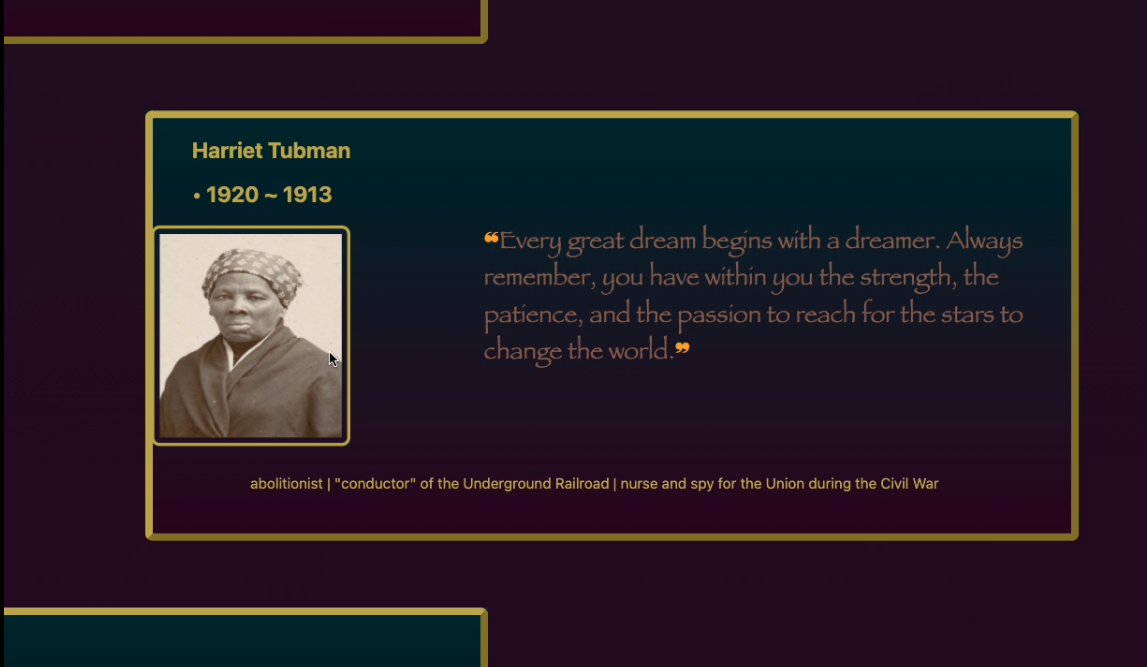 If you have any other important people that I might have missed out that you think are important, comment them down below with a link about them and I'll try to add them!

Well, that's about all! Open the site in a new tab, and make it fullscreen or as big as possible to enjoy it the best!

👋 Au revoir, and have a great end of February!

PS: (Yes, I've said last year I'd soon post a Pizza Making game, I kinda forgot about it lol and I'll try to finalize it when possible)

Edit: set the width to try and make it a bit less messed up, thanks to @BobTheTomatoPie! :D

Hi @CodingCactus here, I have locked this post as the comments are getting out of hand, and are not in line with the intentions of this repl talk post.
I have spoken with the creator of the post and he agrees with my decision. I just wanted to let you all know why this has happened.
Hope you all have a good day and keep making more awesome stuff!

We shouldn't hear about racism or movements like this because there shouldn't be! We should already have equal rights!

@Bookie0 I fear this sounds racist tho :(

In reality, we should have human history, because no human should have a higher social status than the other (I mean, fame... but you know what I mean).

BTW guys: You are all welcome at repl.it!

Don't feel shy because you are deaf/hard of hearing (I am), have autism (also me) or another mental disorder, are black, yellow, or whatever race, or are different in any way.

We welcome you guys with open arms :D

@Baconman321 oh you're deaf and have autism? Dang, the more you know!

ADHD and ADD are the same thing, or atleast i was told
@Baconman321

if you are yellow

@Baconman321 man I feel bad, but those mental disorders ain't gonna stop you being an awesome coder :D

@FlaminHotValdez Does being 0.4% Chinese count as being Chinese?

@Cag82407 no add is adhd but without the hyperactive part. I have it.

@FlaminHotValdez Don't take pity on me for having it, sometimes I ask questions that even my science teacher can't answer!

Sometimes I just need a bit more time to understand, sometimes I understand waaaay faster than other people.

In fact, I think Albert Einstein had ADHD (lots of experts think that).

@Bookie0 XD I've only been coding for about a year and a half now. I'm still learnin, but I do wanna become an expert.

OH MY GOSH, I cannot believe how much I'd miss out if I was deaf (that link above links to the best moosic on the plan0t).

@Whippingdot I'd give you my medical papers, buuuuut.....

then you'd know where I live :/

@Baconman321 I know where you live.

Well if you play a certain game me and someone else made (mainly that other guy), I would know where you live (my little secret as to how).

@Bookie0 Where do I live then?

@Baconman321 all the geniuses suffer from problems

@FlaminHotValdez Since when does a homo sapien not have problems?

Also no editing but vat u say to me 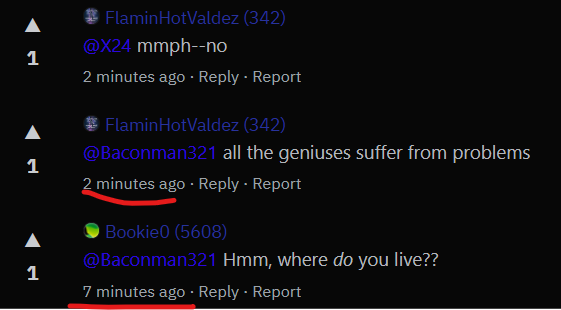 @Bookie0. Also @TsunamiOrSumth can help with this convo (sry for ping read the above messages)

So I already know @Baconman321

@FlaminHotValdez - I am Greek/Italian. Aren't you Greek/Spanish? JK, I'm Asian too, Indian to be specific :)

@Baconman321 I can't believe I'm saying this but HOW exactly do you think having human history is racist?!? It's like saying all lives matter is racist

@Whippingdot
i believe him/her/them.
why would someone lie about being disabled?
the time thing is a glitch from repl.

oh and
@Baconman321
keep on going!
ur so inspirational :)

@FlaminHotValdez
Everybody has problems.
Even the Best.

told u tsunami could solve all our problems @FlaminHotValdez

oh and do u have repl DM? @FlaminHotValdez

can't you unblock the page... And also is ur sister elder or younger @FlaminHotValdez

@FlaminHotValdez - No, I mean Greek. My dad isn't Olympian. Our godly parents are Greek right? Hephaestus and Hades? The Greek Gods?

@GhostKing007 no they're olympian. Or Othrysian I guess bc they were born there

@FlaminHotValdez - Yes, that is based on birthplace and stuff, but Olympian refers to the 12 gods of Olympus, but Hades and Hestia and maybe the minor gods included it makes the Greek Gods. If everyone was based on birthplace, we are all Chaosian, since everything came from Chaos...

#BlackLivesMatter
(I believe that even though I am not one)
We wish you a happy afterlife every one who was black!!!!!!

I met someone on the internet that was #alm. Ibtried to explain how racist that was, and guess what? They were pro trump and pro gun aswell. I could not dissuade them. #blm everyone

yea some people no matter how much you try to persuade them just won't change their mind (not necessarily a bad thing sometimes tho..)
@BananaJellyfish

@BananaJellyfish @Bookie0 If #alm is all lives matter, that is surely the least racist? Because Black Lives Matter implies White Lives Don't Matter? That is equally as racist. All Lives matter is not racist at all.

@firefish malicious intent to people just because of their race

for EXAMPLE, just syaing "he's black" isn't racist but syaing someone is inferior to you because they're a different race is racist for EXAMPLE "he's dumb because he's black"

@Bookie0 Geeze luise that was a fast response lol.

But I want to see what you lot at the other side of the pond (the Atlantic) do for the month. 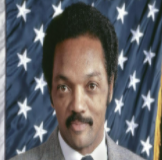 @SudhanshuMishra cant lie but he does, not to be rude

Its so sad that our society still has these issues. Not just black people, but many other races too. Hispanic, Asian, Middle Eastern, even Caucasian in some cases. We need radical change to fix this.
Well anyways, great work! Website looks very cool.

@TsunamiOrSumth yeah, IKR a lot of colleges make it harder for asians to get in because of the stereotypical "asian nerd"

hey @Bookie0 so unrelated but first, nice website!!
Second, do you have ANY idea why the favicon for repl talk is a meme cat thingy

@SilvermoonCat cats have rights too

@SilvermoonCat well why not put a meme cat

The favicon for me is this lol, what link is the cat?

@Bookie0 Just when I go to repl talk, click on a post, and go back to repl talk... idk but it just appears once in a while

@Bookie0, didn't Michael Jordan die in 2020 in the chopper crash?

lul u though it was michael jordan 😆...Well this isn't really a laughing matter... @YashasShah

good job, prolly your best html,css,js project, you should make it responsive tho

@BobTheTomatoPie haha thanks! Yea I think I should try to make it responsive, not really sure though..

I didn't understand anything, but cool!

@PattanAhmed ? What did you not understand?

Some of the text is glitched 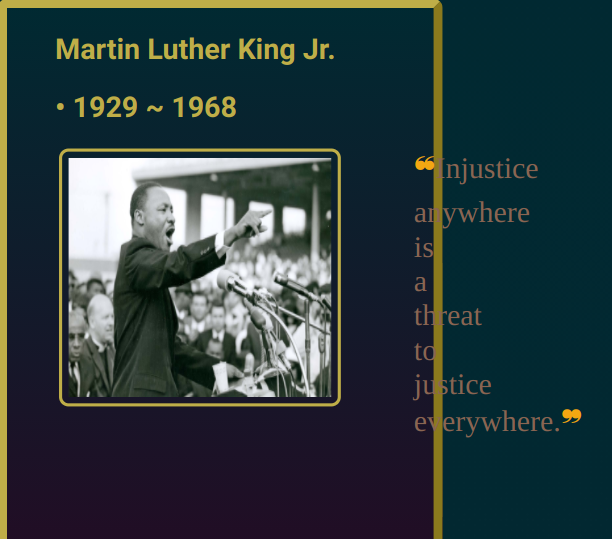 @figglediggle yeaaaa didn't really know how to fix it, try going into full screen and putting it the biggest possible..

@figglediggle Okay, I tried fixing it, how is it?

Hey @Bookie0 this is so unrelated but I need to use one of your loading things for this so is that fine? I ddn't know where to ask and I'm not trying to advertise or anything
sry

@JacobMcPherson1 Ah yes, send me some info about him and I'll add him

This is informative information that...

I do not care about.

why don't you and why did you need to share that you don't care? these people shaped a large portion of history, and in a good way. If you think your comment was funny then think again, makes you sound like a jerk @Mattmann119

@BobTheTomatoPie Darn i frogot free speech and expressing your own opinions on the internet was illegal.
I will try not to anger you by expressing my thoughts next time please forgive me im on my hands and knees begging for you forgiveness.

Like you can express your free speech and opinions, but maybe not in a harsh way.

The definition of freedom is do what you want, also since hate speech isn't a crime I am well within my rights to say as I please, how about you go back to history class and learn the basics of the constitution.

umm, listen to yourself, you are claiming i am abusing your rights for using my free speech against your free speech, isn't it a bit hypocritical to do that @Mattmann119

you couldn't have said it better @FlaminHotValdez

Black history month was in october you know

@19aallison No it's in February (In the US at least)

so the thing isn't weird

ngl i'd downvote if i could

@LeeAlabaster04 are you saying you dont beleive in blm?