added a pause menu, also keybinds for the tools, fixed some bugs :D
oh and also added a footer for all the smart people that exposed me, :P
also thanks for all the updoots i guess, i mean 170+ i think this is my most updooted post lmao, (because it's no where near the most post i've put effort into)

netlify app will be updated in a couple of minutes

you move with the arrow keys or WASD, you shoot/build/attack using your mouse.
you unlock a tool by clicking on it, it will show you the tool stats as well as the tool price, after that, you can upgrade it by clicking on it while it's selected. if nothing happens then the tool is maxed.
you can also sell building by clicking them while selecting a building tool,
your goal is to survive for as many days as you can, so be aware the zombies and the demons, you can camp, you can fight, you can run do whatever it takes to survive, your health regenerates when it's daytime and you killed all the enemies.

this is a quick thing i made for two reasons:

This game somehow reminded me of Minecraft. But with creatures way more creative! Maybe you should add more things, so that we can do more. You can add gold ores, maybe? And add armor, like Minecraft. Anyways...

REMEMBER TO TAKE how to survive a zombie apocalypse, it'll come in HANDY in this game

This is the BEST GAME EVER

For the next part, I think that you wouldn't want to watch it. Sorrowful suffering in silence...

And very dramatic, too...

Me suffering the worst possible death ever. Hey, at least it was my first try! 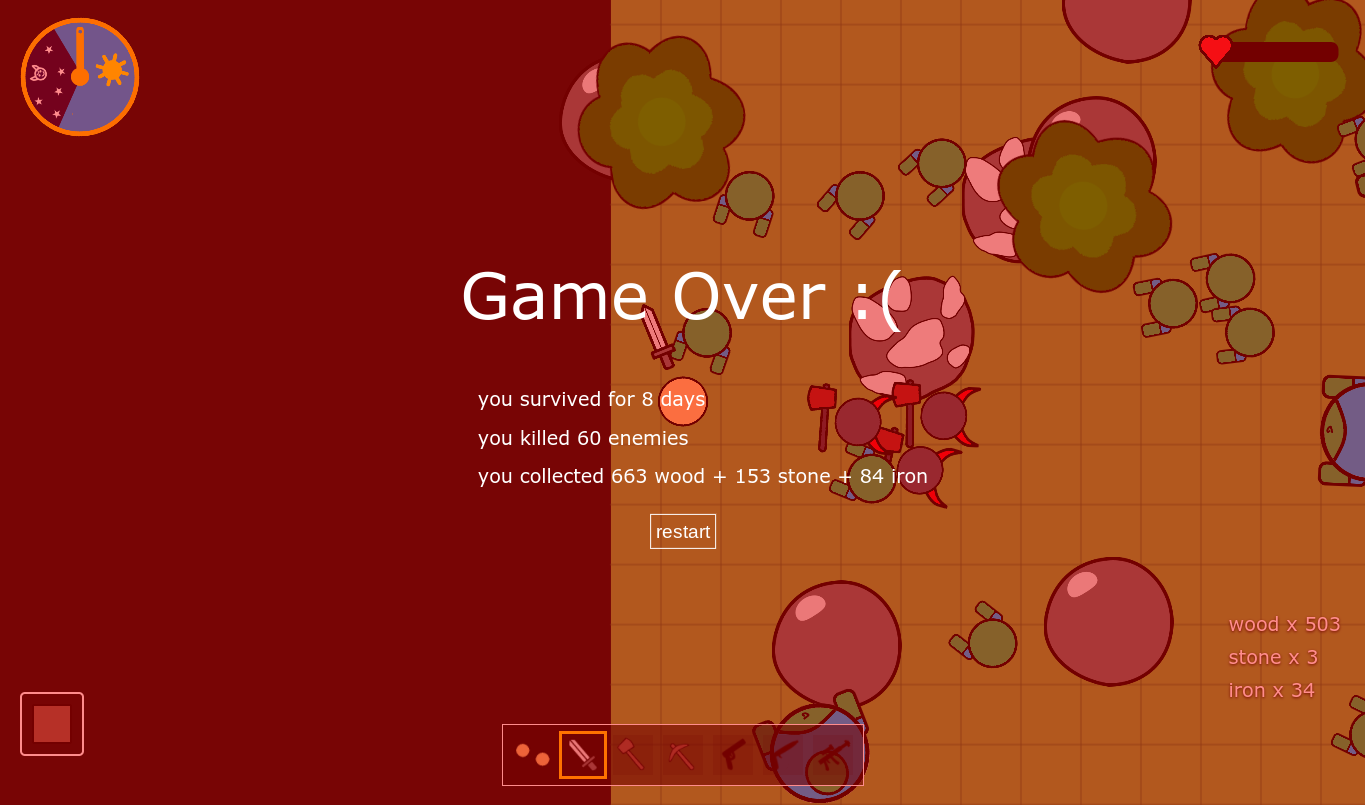 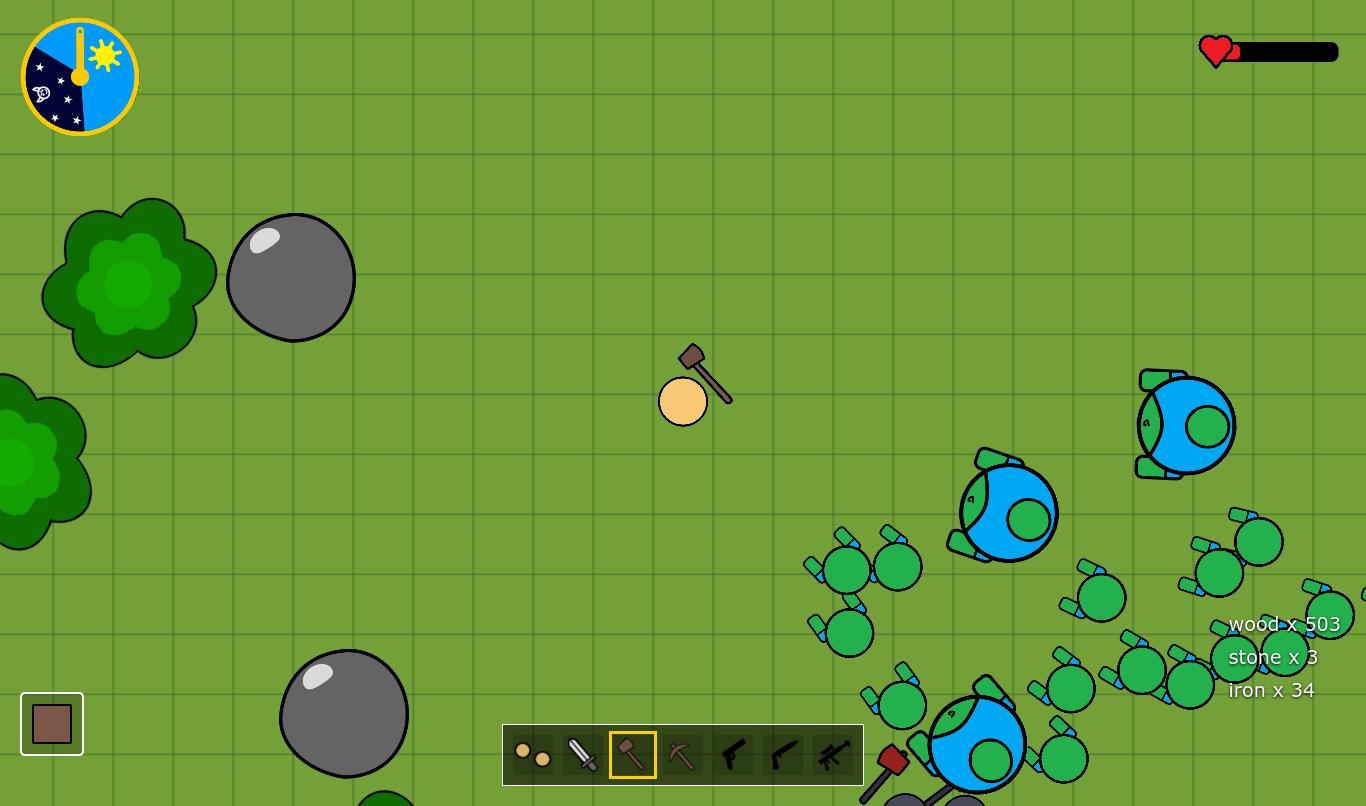 Scene 2: A super evil and annoying mob CHASING ME (uh-oh) 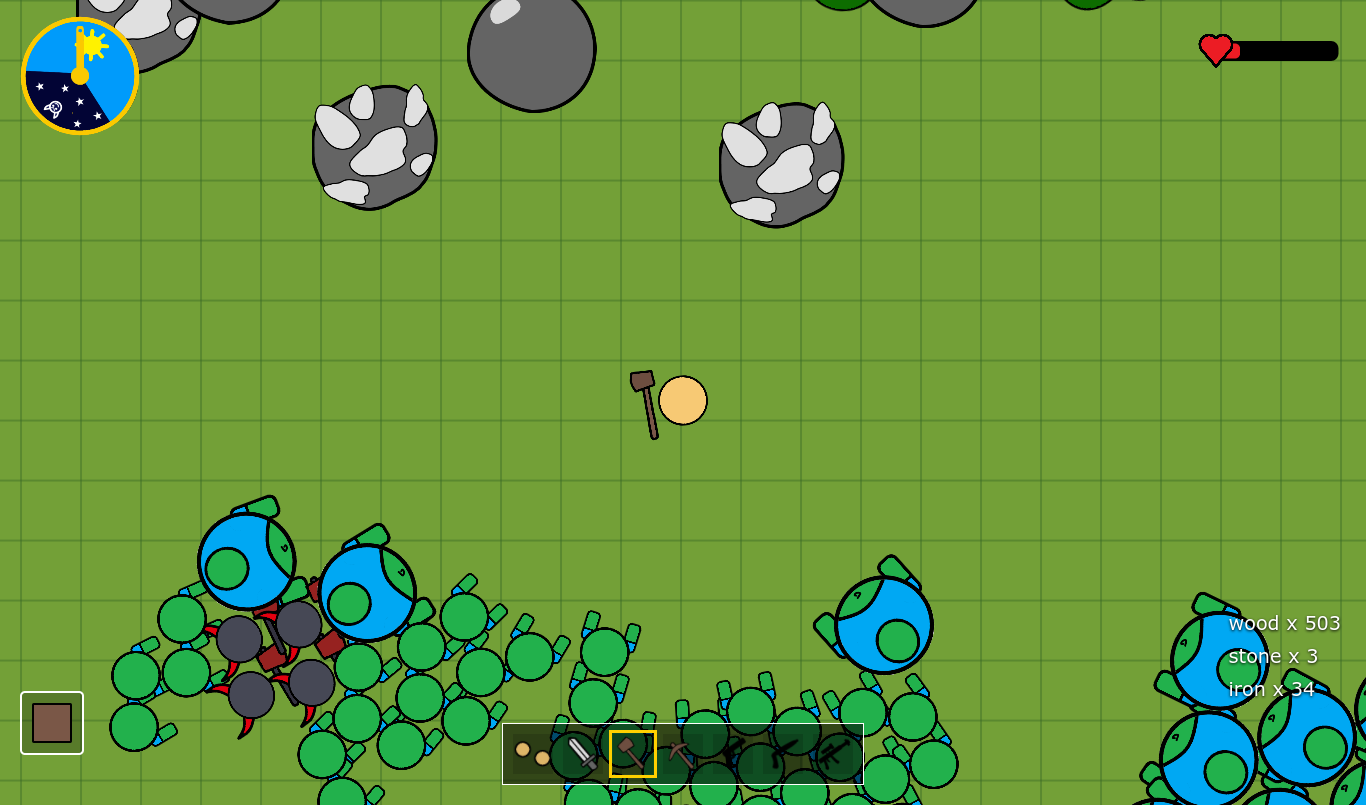 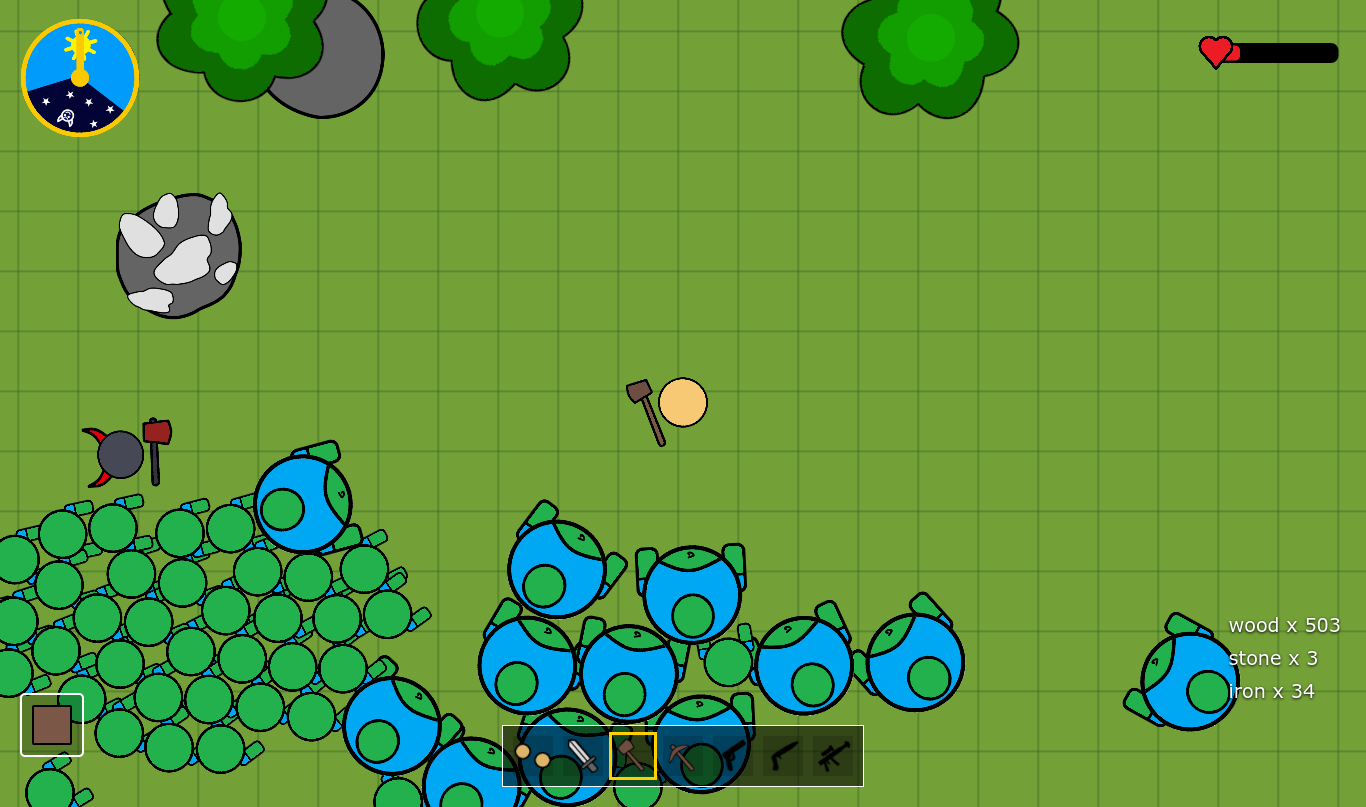 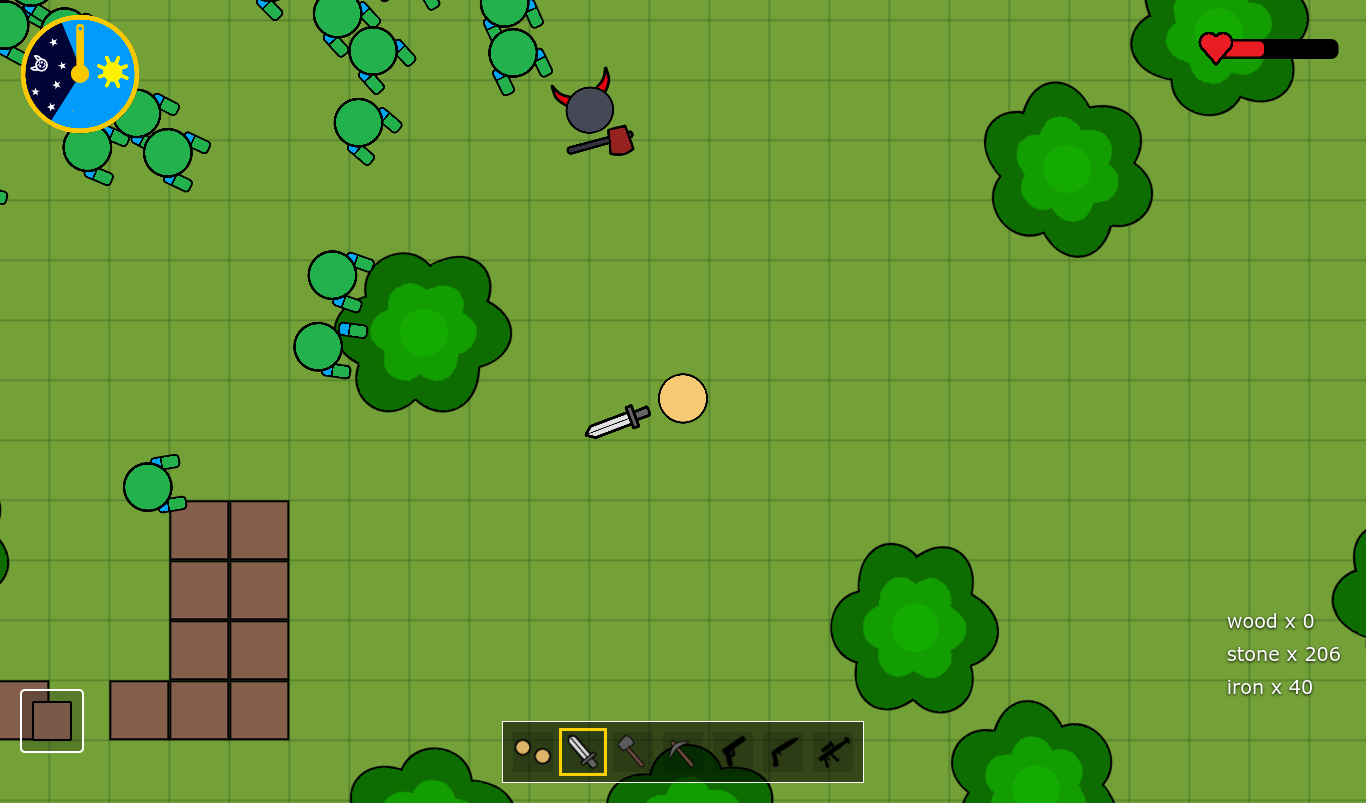 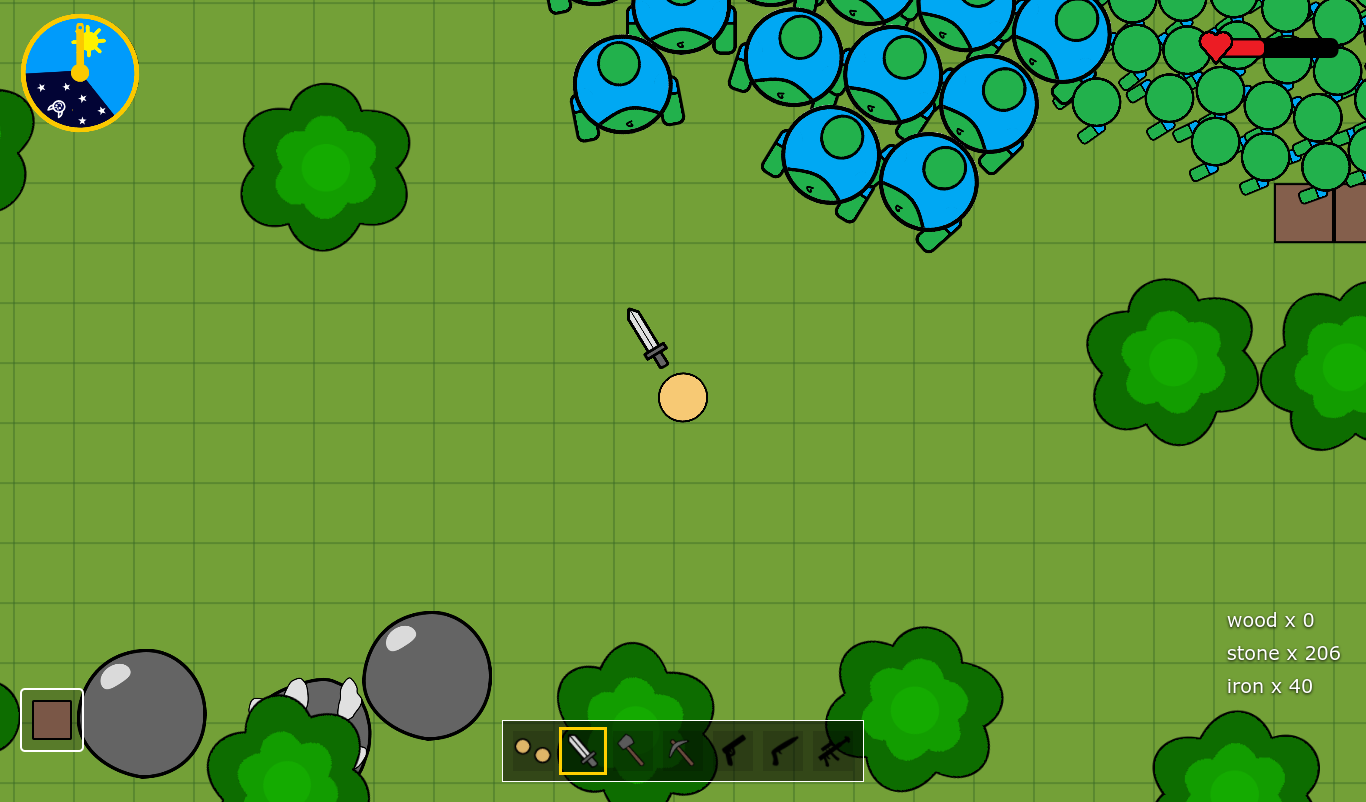 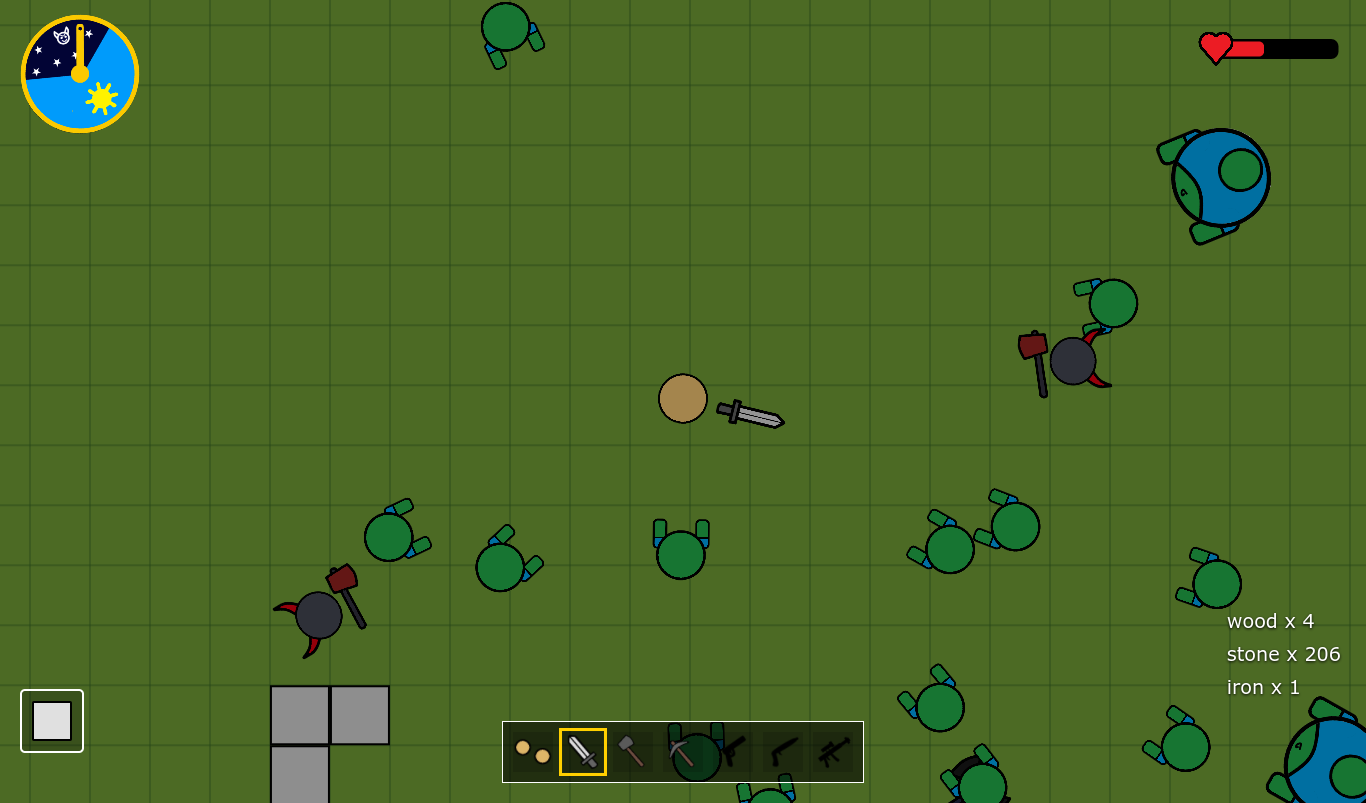 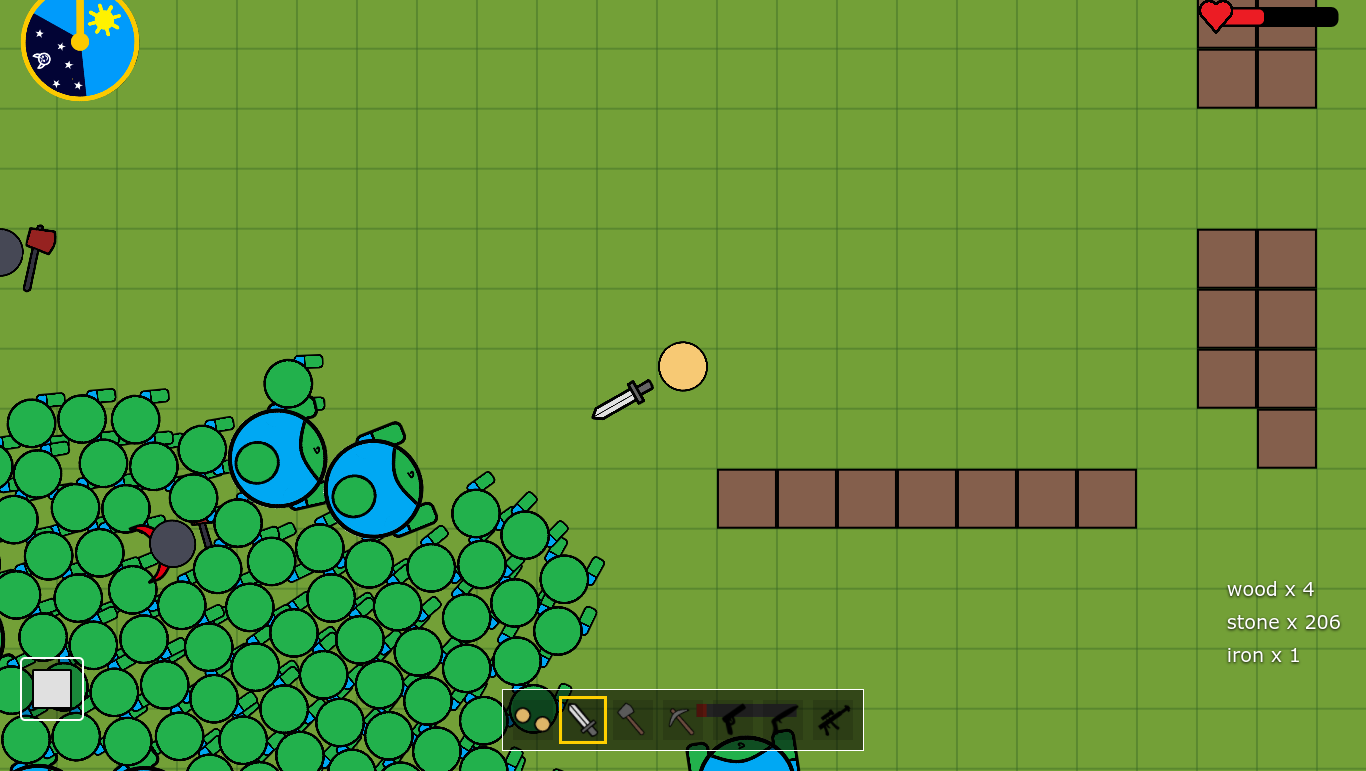 My last day on Earth... anyways it was 9 days of torture LOL 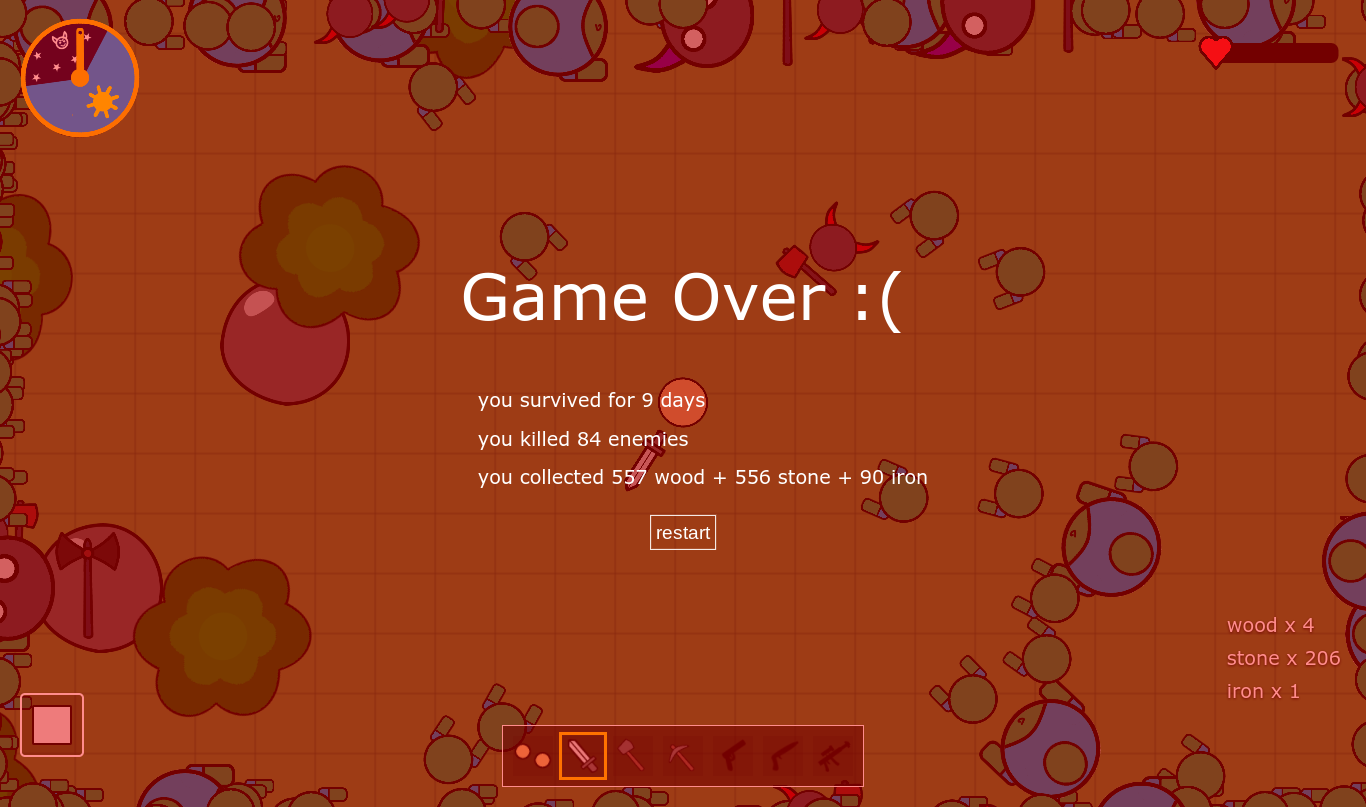 450 days (I don't have the pfp sadly, because the tab blanked out, but I do have a pfp for another thing, I unlocked all items and upgraded them to the highest level possible).

AND A NEW HIGHSCORE (with pfp)! 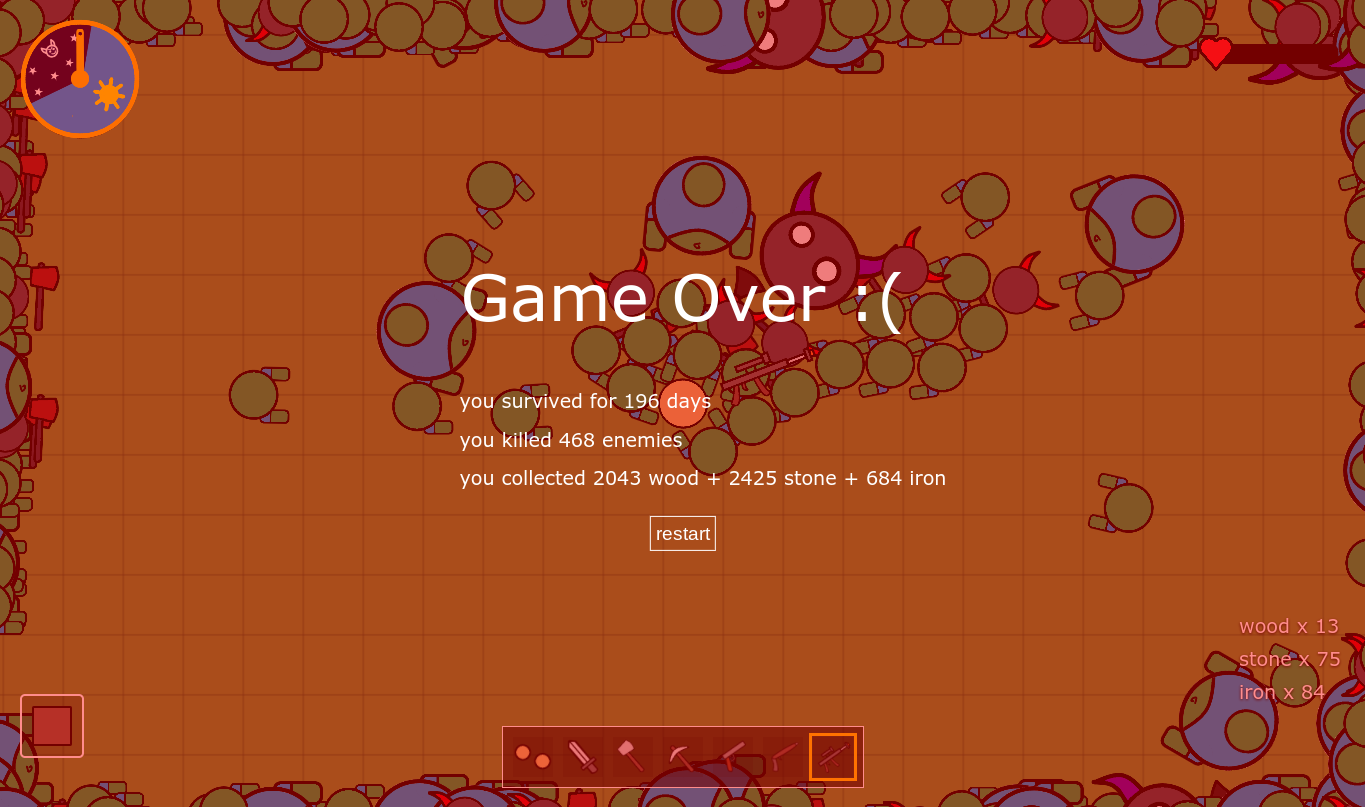 @CodingElf66 hhh thanks :D
but unfortunately i'm not gonna update it :(
if it is i hard 2hours+ feature prob not gonna add it, but if it is something simple like a new enemie... maybe?

@potatojs And I think you put too much zombies btw.

@CodingElf66 Oof. Good first try. I didn't know that you had to press space and I literally died when the first zombie wave came lol. At least my record was 10 days.

@UltimatePython Wow. Wanna have a competition?

For some reason, there a lotta stone in the left section of the map, especially near the left border.

Upgrade sword to iron, then it all ez from there.

I was able to take down the super big axe demon with a sword fairly easily without getting hit.

Oh and: don't waste your materials on walls, they don't help much

@Baconman321 ehh WAAAAAAT?
i don't get passed day 20 without cheating :(
i forget if i fixed that bug... but basically when i was making the genStone function, i made a limit to the amount of stone that can be spawned, when the loop reaches that limit is just returns out of the function. the problem is the loop generates rocks starting from the top-left corner (the 0, 0) so there is a change you won't find any stone in the bottom right corner (width, height) :D

@potatojs I got to 450 days, then I pretty much got bored. Once you get the 100 damage gun, you're really unstoppable. But the problem with that one is that it is like 1 shot per 5 secs. I'm actually not kidding.

@potatojs A new enemy! Ok, you can put Minecraft characters, I guess.

@potatojs Technically I left the tab running, so I was at day 18 or so.

You should make stone regenerate, so far I haven't seen that happen.

@Baconman321 it does, just move around the map don t stay in one area

@potatojs Dude I forgot to close the tab when I was like at 75 days then when I woke up to play again it went there. The day night cycle. lol

@CodingElf66 Ok is there a reward for beating the highest score

@Nathanielx3rd i'm not sure, but I don't think so. You thought upvotes? Well, at least CodingElf got his 8 upvotes for this comments lol

if you close and reopen the tab and click continue the stone, trees, etc with [email protected]

@komainu no they won't

@potatojs it worked for me

@potatojs is not that hard shotgun is OP

@Baconman321 And guns in case you don't want to get close to the big axe guy.

@FlaminHotValdez I used to be able to ez take down the big ax guy with just a sword, but now that they are faster it is a lot harder. I have still done it though, but with a much higher failure rate.

@ruiwenge2 thank you so much :P

@potatojs It's not THAT ugly.

LOL I WAS COCKY AND I DIED XD 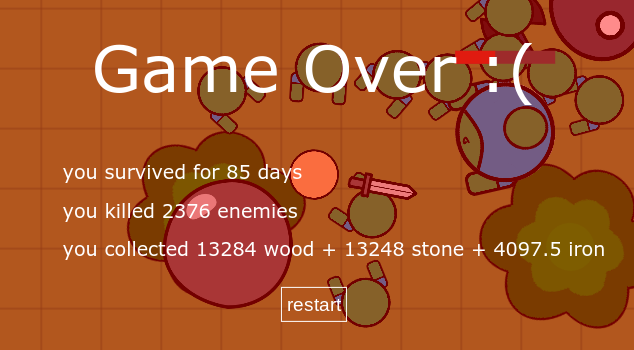 @omaewashendieru lmao that's A LOT of days, you are gonna stay in the leaderboard for a while... 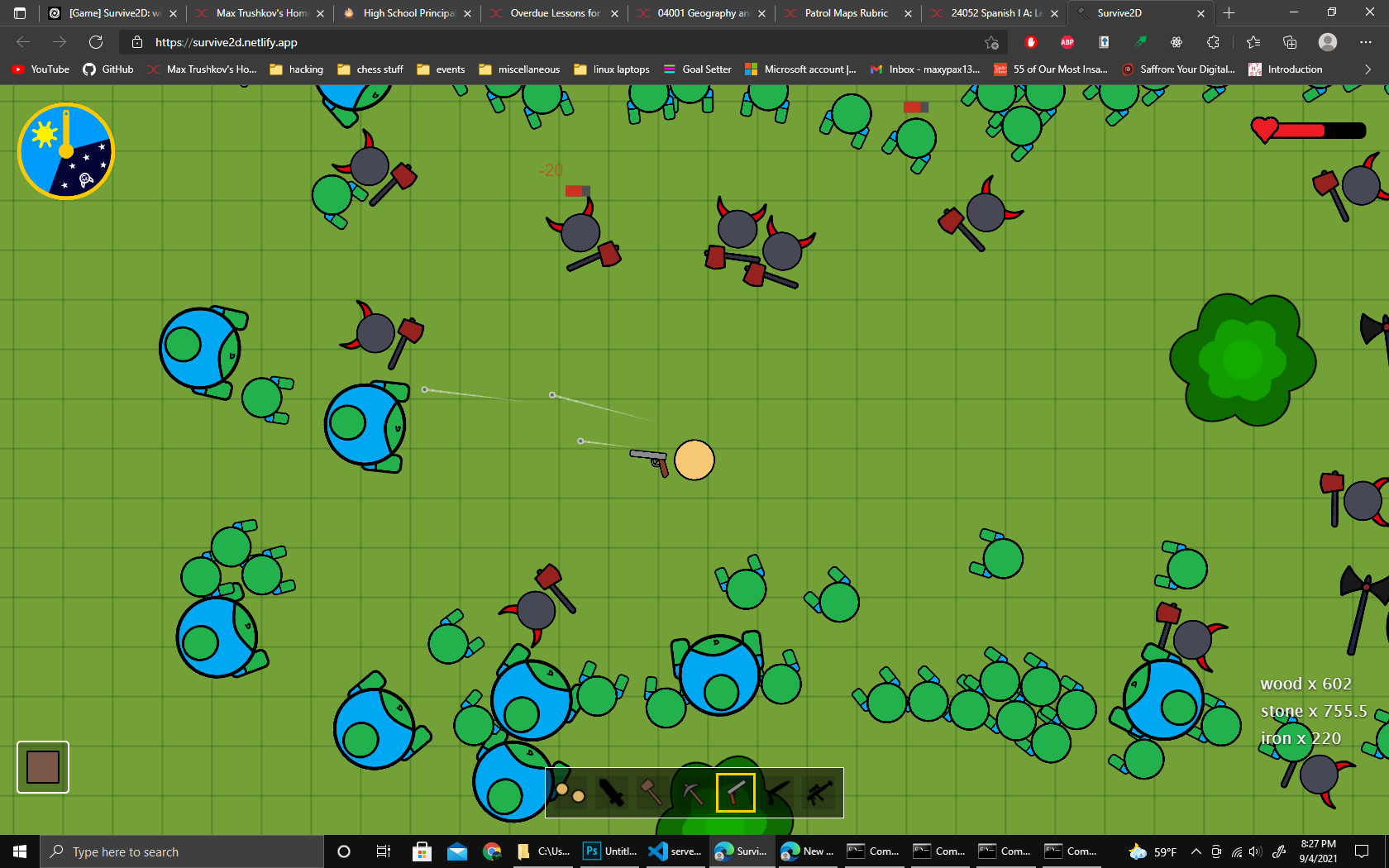 Please update this, its amazing, i love it.

Cool!
Did you build this on Replit? The nodejs app simply redirects you to netlify

@notTussiez no i coded it in vscode, pushed it to github, hosted it in netlify from github, i then created this node app that rediects you to there. i couldn't host it in repl :(

@potatojs From what I know, VSCode is pretty useful. I'll have to try it sometime.
:(

@notTussiez vscode is the perfect ide, (for me at least),

well i was learning docker and nginx and stuff, some devops basically. and also some full stack stuff: graphQL, react, firebase, and friends

@potatojs
Hello! Love your game! I just want to know how you learned to code this... did you use like a website to help you learn or by school...?
(I really want to learn how to make stuff like this)

A guy who survived 85 days? That's crazy! I survived 5 days.

I unlocked all the stuff now what

wow this game is hard! Survived to day 15 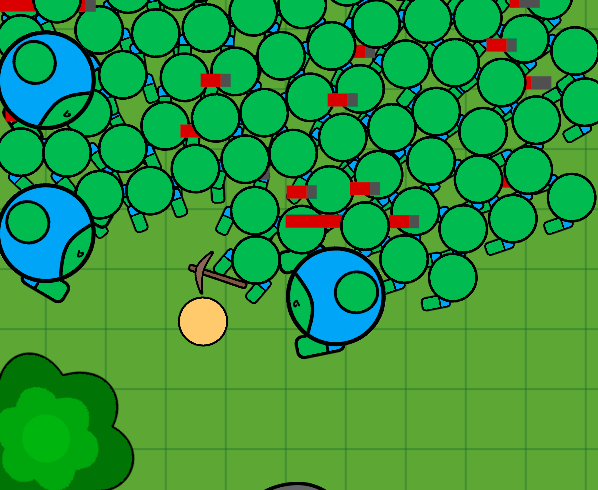 NOT GONNA LIE this is amazing.

Review of the game.

In some ways, this reminds me of Minecraft, but it's lots more fun. The 2d style really gives me some nostalgia with those BR adobe flash games.

fixed the tabs thing now time won't pass if you are not playing
added a leaderboard that you can enter by sending a screenshot of the number of days you survived
there is arrows pointing towards enemies that are outside the window
you heal when you kill enemies
random bug fixes
yes you can tell i ACTUAllY lisened to the feedback, (about the "i'm too busy to update the game" thing, a blender render was taking too long so added the most requested stuff while it's rendering to not waste time)
UPDATE2:
added a pause menu, also keybinds for the tools, fixed some bugs :D
oh and also added a footer for all the smart people that exposed me, :P
also thanks for all the updoots i guess, i mean 170+ i think this is my most updooted post lmao, (because it's no where near the most post i've put effort into)

enemies now are slower at the day, and to make things fair for them they are a bit faster at night
added a grenade launcher
running on floor makes you faster so now floors are actuall usefull
ou can open and close the pause menu using the p in your keyboard
i maybe added other stuff but i forgot so yeah..

didn't add a mini map, i changed my mind for various reasons

netlify app will be updated in a couple of minutes

gameplay
you move with the arrow keys or WASD, you shoot/build/attack using your mouse.
you unlock a tool by clicking on it, it will show you the tool stats as well as the tool price, after that, you can upgrade it by clicking on it while it's selected. if nothing happens then the tool is maxed.
you can also sell building by clicking them while selecting a building tool,
your goal is to survive for as many days as you can, so be aware the zombies and the demons, you can camp, you can fight, you can run do whatever it takes to survive, your health regenerates when it's daytime and you killed all the enemies.

about
this is a quick thing i made for two reasons:

i wanted to fix the abomination that was this game, i mean, the buildings don't stick to a grid???!! it was so stupid, i didn't play his game but i liked the idea. 2D survival game with building and shooting elements..
i wanted to practice typescript so i can move on to postegres and react with typescript and stuff
source code 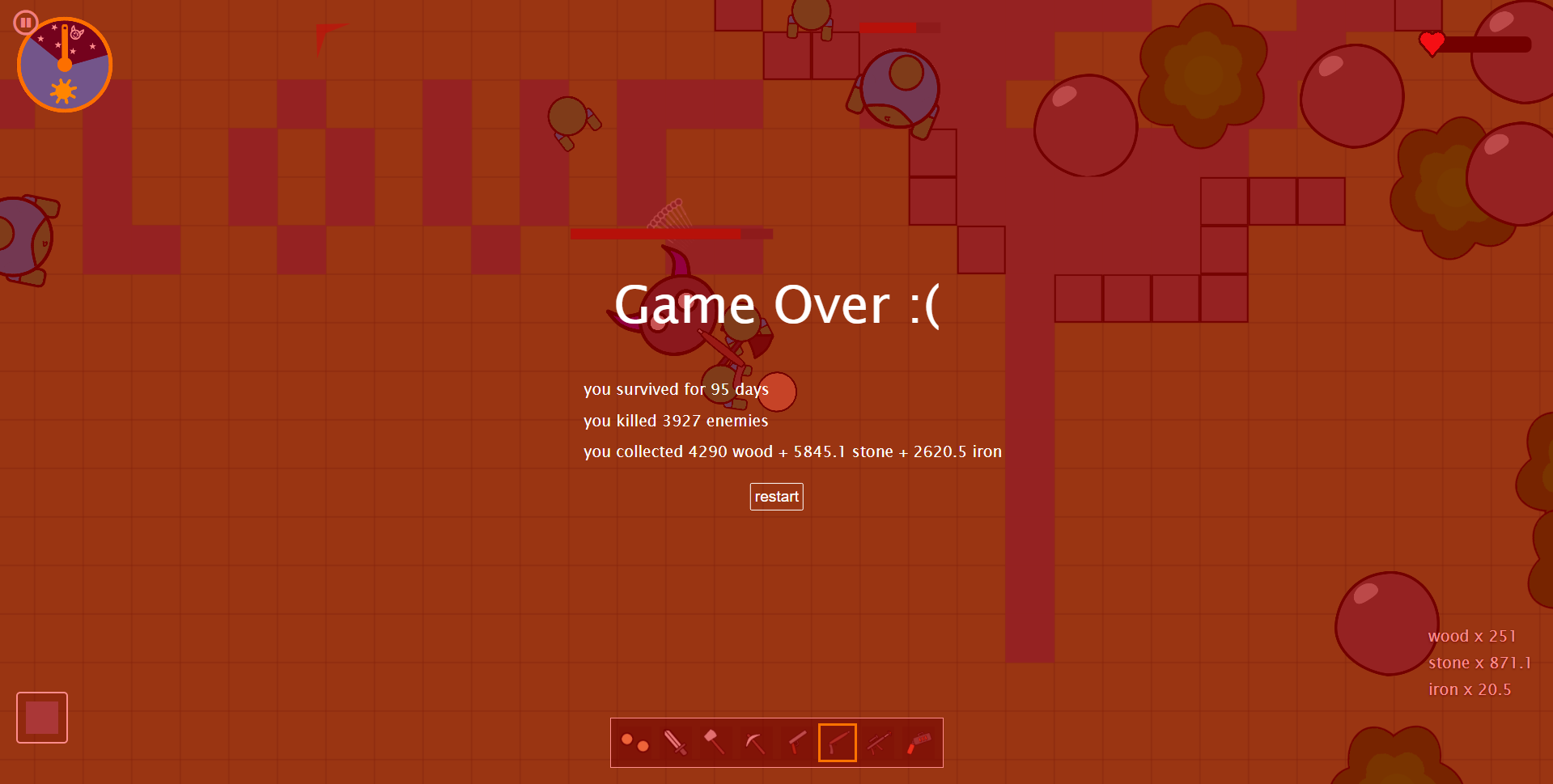 @Dynosawr the is a word "I Love Survive2D" that is WIP

@EliasPetren because i'm stupid, i tried to fix a bug but i messed up, i'll fix right now

I LOVE UR GAME!!! its so good i am a starter to like 20 mins ago and its fun I want to make a game like u

also you should add recipes to make weapons I do not know if there is one already.

This game is fun even know I survived for a Day.

@potatojs welcome. I think this game is on crazy games to so you could say your famous! if not good game

When will be the next update?

@TylerNguyen19 when i find good ideas

@JacobBirch lmao fight zombies with a sword :D
that's the equivelant of fighting using a fork, it doesn't really work

We'll be right back

TURN DOWN THE DAMAGE AND DAMAGE SPEED OF THE SMALL DEMON @#$*!

@potatojs I have literally died twice to them. and what does the

mean? how does it work?

@komainu it's cycles, basically useless internet points, you get them by:
getting upvotes on your posts or comments (one upvote = one cycle)
or when someone marks your answer as the correct answer, only in an "ask" post (one question answered = 5 cycles)
the only value i see in them is having a reason to celebrate when you reach a nice mile stone (100, 500, 1000...) i used to do these too

@potatojs ok thx, u have sooo much XD

@komainu lmao i have a "decent" amount. i've been really active mounths ago most of my posts got 50+ upvotes, because i found a way, or multiple ways to guarantee getting to the trending page

@potatojs that still a lot of upvotes...

@potatojs grenade launcher is not worth it. maybe replace it with a taser
that chain the shock effect.