Synthrogue 🤖⌨🎶🥁 - Program a robot to escape using a sequencer

Program a robot to escape using a sequencer

⛑ If you are having issues running the game, you can also use this link as an alternative: mirror link

Synthrogue is a game where you indirectly control a robot by programming its moves in advance via a step sequencer.

Program the robot's moves to get the key and then find the exit to escape a level.

The challenge is to escape the levels, but have fun with the sequencer to find cool melodies that go well with the beats played by the accompanying drum machine in the background.

If you are a musician, you can think of this as a programmable toy synth with a game visualizer 😁. 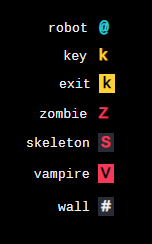 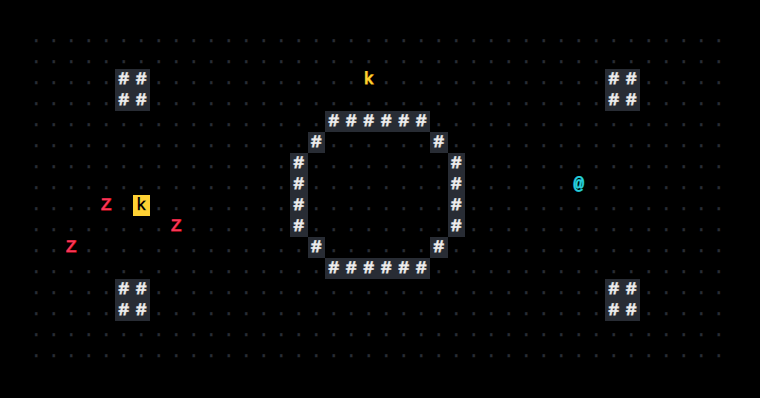 Hint: The sequencer pictured above is a possible solution to level 1 😉

The game was insipired by the minimalistic aesthetics of roguelikes and music trackers. The terminal-like UI was based on the visual programming language Orca.

The indirect gameplay is reminiscent of games from Zachtronics (ie. TIS-100, EXAPUNKS, etc.) wherein planning and writing instructions is a huge gameplay component.

Hack your own drum patterns and levels

Fork the project and start hacking!

Drum patterns are found in src/logic/patterns.js. There are 4 samples available: kick, clap, closed hi-hat, open hi-hat. Patterns are in 16th notes. Just make sure to add your new patterns to the export default { ... } object at the very bottom of the file.

To use your new patterns and also create new levels, you can edit src/logic/levels.js. Just follow the same style as how the other levels are created. Just also make sure to add your new levels to the export default [ ... ] list at the very bottom of the file.

The characters used in building the levels are the same as the Legend listing above, however, the exit character is x.

I had fun writing the game and having a concrete target certainly focused me to finish it. But I did scope out a couple of features due to lack of time.

I have plans of improving on this prototype/jam version.

Hand made with ❤ by anton

Very cool. I'm really drawn to the aesthetics of the game/ui. Also, thanks for all the wonderful info in your post.

This is really cool, much better than mine! (https://repl.it/talk/challenge/Repl-Hero-a-fun-music-arcade-game/16400) Wish I could upvote!

OMG 😵😵so cool, got my upvote

This game is cool !
I love that the beat changes each level

A little feedback (I played the two first levels) : The robot is a little far from the exit, you can maybe add a clickdown + hover feature to fill many squares

Yeah, the sequencer can use a number of quality of life updates. I'll work on your suggestion.

@rediar I suggest playing it on a new tab. The embedded repl cuts off the step sequencer.

Use the step sequencer (the grid) to place in "notes". The arrows on the left pertains to the direction you want the robot to go.

Click [ play ] to start the sequencer. You can still add notes while it is playing.