Yea this is a repost, but its not just for no reason. I fixed some bugs and added some features(List at the bottom of the post)
Also now there's a timer for anyone who wants to do the funny speedrun

Thats it for the new stuff

If you want to actually play the game with a purpose I would read most of this post, but if you just want to walk around and figure stuff out then just read the basic controls part. But first, epic intro time

Trapped on an island, no means of escape

That is, to the common eye. Nobody has made it out alive, nobody even knows what the island is. You got here, not knowing why or how. Nobody to keep you company.... except it. Can you escape?

There is a thing at the start for controls, so I wont go over that. But, there are some basic mechanics you should know about. Every big place has a sign, which says what the place is called. There are lots of items around the map, if you walk into them you can pick them up. Item spawns are semi random, meaning that yes rng can play a role in some situations. You can equip/unequip and drop items whenever you want, but you can only hold 3 items at a time. Some places you need to do something to enter (Must power the lab to enter, must have a full diving gear in your inventory to enter the lake.)

That is all you really need to know to run around, but if you want to try to escape the island you should read on

There appears to be something else on the island, and it doesn't feel friendly. It seems to like the outdoors, and only come close when your guard is down. Maybe sleeping outside isn't such a great idea. Something tells you that there are 4 objects located around the map, but what is so special about these? The Powerplant seems to be able to open up certain passages with Wiring.

There are currently 3 ways to escape the islands, 1 of which is the hardest, and the only TRUE ending

There must be a way off the island, by the sea. It seems to tempting... If only I could find something to float on, and maybe even things to row with.

This is the easiest ending, if you know what you are doing you could probably get it in less than 3 minutes

For some reason there seems to be a dormant plane in the southeast region of the island. It looks a bit damaged, but looks like it can be easily repaired. A bit of damage on the hull, the propeller looks shot, and no fuel either. Shouldn't be that hard to do, right?

This is the 2nd easiest ending, yet it's still a challenge.

The Truth. For some reason even saying these words in your head sparks some sort of freedom. There only seems to be 2 ways out... right? Yet something feels off. The 4 items, keys if you will, almost resemble the way out, but how? Maybe they could all work together, and open some sort of passage? Even so, you feel that it isn't just another ending. Something tells you that there is some sort of boss that awaits.

The hardest ending, just because of how much you actually need to complete. You need to get the 4 Modules and go.. somewhere. Once you get the final key, you will be transported into the boss battle. This is probably the favorite part of my project, just because it is some sort of difficult and took a while to put in.

I fixed most of the big bugs, like not being able to get to the second part of the cave and semi cloning yourself, but i know that there must be more. The day system is a bit janky, and sometimes the timing system also becomes weird. If you find any bugs or glitches just comments them below with the error message.

Module E is an annoying module to get, its probably the hardest to find. It is right here in the first part of the Cave: 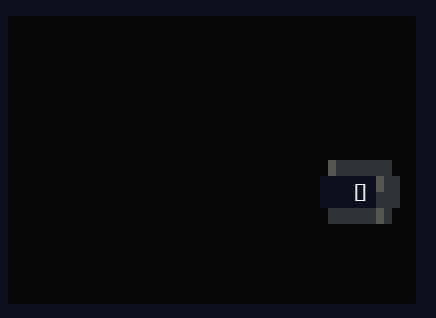 The only way to get it is to go there with Module C and B, and you will realize that it isn't any ordinary wall...

There are probably some i won't list here because they are pretty minor, but these are most of the things i did:

Thanks to someone (I forget who) for the KeyboardThread class, I kind of yoinked it from someone's flappy bird project last minute. The inspiration for this game came from a game called Isle, very cool. Also my friend Lucas helped a lot with new features and bugs, also very cool.