Hi! This is one of my first Replit Talk posts, so please let me know how it is!

What is Sha-256?
Sha-256 is a cryptographic hash function. It was created in 2001 by the US National Security Agency, also known as the NSA. This hashing function is one-way, meaning that once you create a hash from a string, you can't create the string from the hash. Each hash is 64 characters long, and includes numbers and letters. 'sha' stands for 'Secure Hash Algorithm'.

More information can be found on WikiPedia.

Sha-256 in Python (with hashlib)
In python, there is a built-in library for handling hashing like this, called hashlib. A very simple hashing program can look like this:

This is very easy and fast, which made me wonder... what if I made my own sha256 program in Python without using libraries like hashlib?

So I created this repl. In total, it uses two external libraries, but only for printing to the console. The libraries it uses are:

Explanation
The repl has 12 functions, which are explained below.

The Program
When you hit run, the console will allow you to enter text. When you press enter, it will convert it to sha256 and show how long the operation took.

To stop the loop, enter break.

Thank you for reading! Feel free to test out the program below ;) 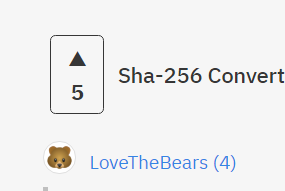 @JakeHu2020 I am confused, what is the up arrow emoji pointing at in the picture?

@LoveTheBears you have 5 upvotes, but you only have 4 cycles (you get one upvote for each cycle)

wow i strugle using libraries to use SHA256. I cant even comprehend remaking it!

Well done! This is what I would call a high quality post on replit.

Wow I have a medium bit of exprience coding and fixing issues. So if anyone wants to give me tips to help in the long run. Let me know. I might need the tips and you might be able to help me. May God Bless you and keep you well. Be nice and be kind and be strong together and help one another and then they will do the same to you. Never think you are bad. People have some advantages and disadvantages and do not compare yourself to someone else. Compare to yourself and try doing better than the last time. I hope people will do the same. I am trying to help. Thank you for being with me when I am coding. It really changes perspective and it will help many people who are dealing with nightmares. It really changes peopleś mindset. There are many fields in life and there are manty jobs to offer near your city so you can stay near family and help them when needed. It will really help and thanks for being with me when I code. Bye and Have a nice day. #choosetobehappy #youareloved. Do not think you are not loved. You are loved even if you have a disability or problems. Just pray for everyone who deals with that and maybe you will help them when they go to college and when they get bullied.Bye. Sorry for making this long.