I decided (finally) to look into repl.it's structure, and see if I could find anything neat. The results are... interesting, but thankfully I don't see any gaping holes which is what I expected.

(Bonus message at the end - repl.it just did a very neat update)

I found these using the handy recon-ng tool and a google dork (site:*.repl.it)

What, if anything, is on each of them

I was unable to connect to this one, but that's just visiting it as a website. I'd like to do a portscan but I'm concerned about the legality.

This one is pretty weird. It seems to be a mirror of the regular repl.it. Looking at the subdomain, staging, maybe it's a redundancy for the main site? For them to upgrade then switch? I'm not quite sure as I haven't had much experience in the corporate world and I don't know how things are typically done. When you visit this site, you get prompted to login. Doing this with google doesn't work, and I havent been bothered to try sign up yet. You can, however, create anonymous repls that work, so yeah.

Edit: Thanks to @PaoloAmoroso for explaining what a staging server is for -
"A staging server is a server for testing a system or some of its features using a setup and configuration similar to the production server's."

Now, when I found this, I was reeeeeeaally hoping that they had a public API so I could automate some neat stuff, however it appears to either be closed off or down, as I just get hit with a cloudflare page.

Edit: Having just stumbled upon repl.sh, a project that appears to have been sadly abandoned, maybe this had something to do with it?

I cannot, for the life of me, imagine what this would be for. When visiting it, all it returns is ヾ(*ФωФ)βyё βyё☆彡. Now, what's neat is that you get the same result when doing something like this. Maybe it's the default return for whatever google service repl.it use for running code.

Edit: after peeking into repl.it's abandoned cli npm module, repl.sh, this appears to be the default option for the -G argument. It calls this the goval host, which I can't seem to find any information about. For now, I'll just assume this has been abandoned along with repl.sh.

Google 404 page. As I suspected, repl.it use google for something, whether it be data hosting or server management.

Wasn't able to connect to it through my browser, judging from the name it may have some interesting ports open but I also doubt it.

Strangely, I wasn't able to connect to this either. I was sure that they were hosting all their images on it, but maybe you need some form of authentication that I'm too dumb to figure out. I have no clue what I'm doing.

This is pretty neat, it shows repl.it's uptime and other info.

This one is really curious. If you head to this url, it will just redirect you straight to repl.it, however, using the google dork site:replbox.repl.it (just search that up in google) we can see what appears to be websites hosted on there. I'll look into that more later. They all appear to be under the /data/web_hosting_1/ uri which I think means they're ready to expand, which is good.

Edit: Okay I think its for all the HTML,CSS,JS sites hosted on repl.it, but that can't be right as there is way more than them. Actually while I was typing this I now realise that it's for sites where people have connected a domain to. Repl.it must save the actual files somewhere static in order to have them connected to that custom domain. That makes sense to me.

Just the regular site, nothing interesting to see here.

Some sort of mirror for the doc pages of browserffy? Not sure why it's hosted on repl.it.

Edit: After a quick look, it seems to be browserify hosted on repl.it. From what I can understand, they must use it for their nodejs projects and what it does, is grab whatever requirement, install it, and serve it as a standalone module. Pretty neat!

I can't believe it took me this long to check for this. Also, something interesting, I think repl.it rolled out an update as I was typing this as they've started using a different tool to install packages in python, and repls are loading faster than they've been for the past day or so. Nice. It appears that now, instead of rebuilding each python package each time, they load them from a database of pre-built packages. I'm glad they did this because everything runs a lot quicker! Well done, repl.it!

Edit: This is actually probably only an update for those opted in to the beta lol which is good because they messed up one of my repls.

More about the update

Okay actually I changed my mind, I'm not done with the new beta update. It broke one of my repls. Repl.it updated one of their docker packages, which they use to install requirements, two hours ago as of now. This update did something that changed how they install them for python. For some reason, they decided to now use the python poetry module to install things, which is neat, sure, but doesn't seem to like having a git dependency in the requirements.txt. I don't even know how it works with a requirements.txt file as from what I can tell from their github page, it should only work with their special toml files which look too complicated and bothersome.

Furthermore, I had no clue they even had a docker profile, but it makes sense that they'd run stuff with docker as it's a good fit. I found an old post talking about how they use docker, but I guess I just never saw that.

So, many people seem to think that repl.it use docker for running repls, and while that is technically true, I think I might have just found out a bit more! While experimenting with getting the exact time a uuid was generated, I found the MAC address (a unique identifier) of the server where the repl was being run. After doing a google search for that specific MAC address, I found it in a github issue page for moby, and it appears that, unless I made a mistake, this is what repl.it use/have used.

A staging server is a server for testing a system or some of its features using a setup and configuration similar to the production server's.

Repl.it is hosted at Google Cloud Platform, so it makes sense to get Google error or status pages.

@PaoloAmoroso Ah thank you for clarifying, that makes sense

@timmy_i_chen can you shed any light on what I haven't been able to find? It's pretty interesting

@timmy_i_chen also, I hope you guys have a security team of sorts? Doing internal and external pentests, etc. With so much PII it's pretty important lol especially considering how much repl is growing and how big it's become.

staging.repl.it is where we test soon-to-be-released-code. It seems like a clone of repl.it because it uses production data.

eval.repl.it is the domain for our infrastructure. Any repl that runs on a container will connect to eval.repl.it @turbio can probably go into more details here

https://eval.repl.it is a websocket, you can connect to it with double-base64 encoded data that looks something like this: 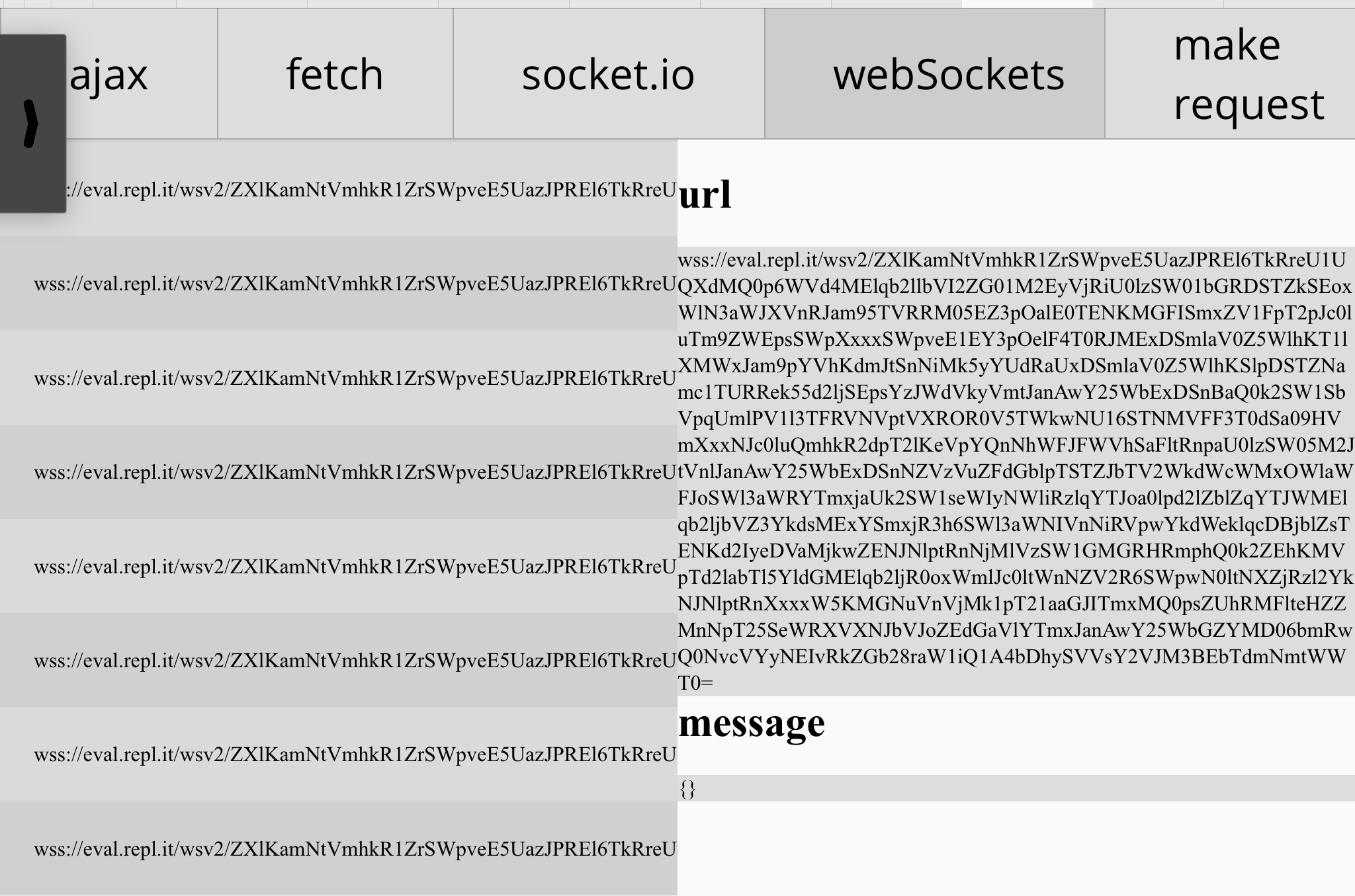 As I suspected, repl.it use google for something
spy music intensifies

Just the regular site, nothing interesting to see here.

I think https://eval.repl.it is a joke website. It’s just like https://store.repl.it , which I think you should add.
Update: Hmmmmmm... that’s curious. I can’t open store.repl.it. I used to be able to do it.

@CodeABC123 I don't know, I think the current message is just a placeholder. It seems to have used to be used as something. And what's store.repl.it? I've never seen that anywhere.

@MarcusWeinberger
When I go to the website(store.repl.it), this is the only thing I see: 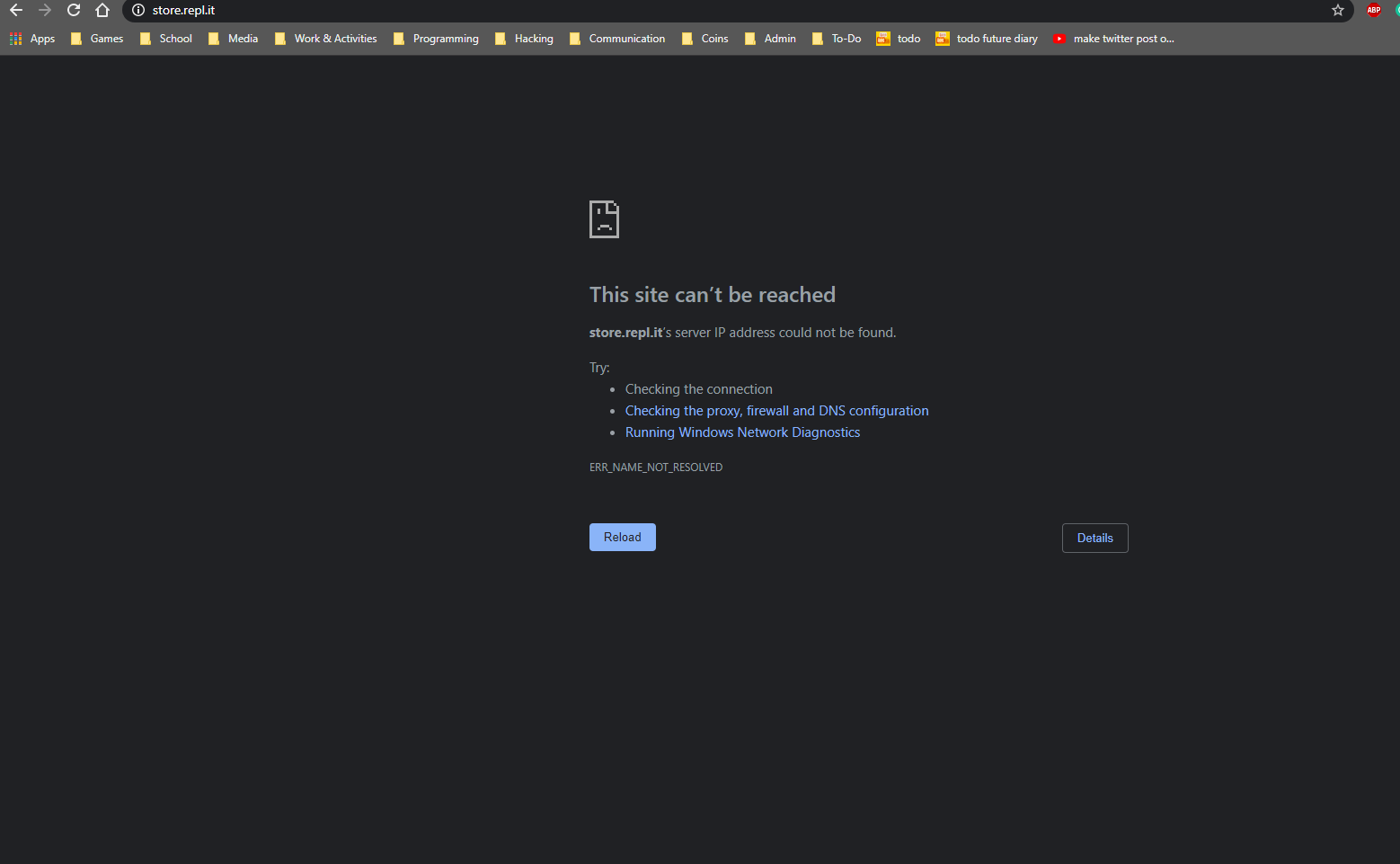 This is awesome @MarcusWeinberger ! Have you considered drafting a Google Search Console or a GHDB tutorial for repl.it?

@EchoCoding I don't know what you mean by that, I'm not quite sure what those are

@MarcusWeinberger I mean have you considered writing a tutorial on how you did this?

@EchoCoding oh right it really wasn't much, just guessing a lot. The tools and dorks I put there though

This is an interesting work :)
I think that replit executes code in docker containers

Hey, thanks for writing this! It's neat to see someone is paying attention to even the work that we haven't released yet ^_^

You'll find out a lot more about package management updates soon when we launch and publish a blog post about all the changes.

Looking at your repls, I'm assuming the trouble you ran into is with pyCraft. This is a known problem and we're busy looking into it. I'll keep you posted once we have a solution.

@raxod502 thanks for clearing it up a bit! And the pycraft thing isn't urgent, the repl.run site still works for that. But yeah I'm looking forward to that blog post :)

@markerosenbaum hmm. those are file hosting for replit!

You can connect to it here: https://sp.repl.it/v1/t

@raxod502 , was I right about repl.it using moby for docker stuff? I recently found something new, it's been added to the end of this post.

@MarcusWeinberger Moby is just a framework that's used to build the Docker project. We do run your code in Docker containers on our infrastructure.

@raxod502 ohhhh, I didn't read a lot of moby's readme. But then why would your IP address only show up in that one issue? Unless someone from repl.it made that issue?

@MarcusWeinberger maybe docker just uses that mac address for containers in general, I dunno. or maybe there was a collision

Anyone having trouble with the "Run" button not loading up?