MULTISNAKE - Featuring: Snek: 🐍 with PRIVATE ROOMS: Share the link with your friend and PARTY🥳

The epitome of months of hard work. Made through my sweat, tears and blood, I give you....

wait thats the second time i done that...

Play with either WASD of ARROW KEYS.

Most people will be in the public room, but when your playing this with friends, you can create private rooms.

SPACE key to use boost. Boost sucks up one apple every time you use it (if you hold it for a while you will lose a lot of apples).
Boost makes you go 2 squares instead of one, making you go twice as fast.

it has been changed to 10

Run into yourself, another player, walls, or exit the board and you lose

I am working on this... have added a lot of things. please play on the test servers to see if you like them

Dont worry though, I have increased the FPS consistency a ton but it presented some other bugs so I dropped it to post this.
(its done)

Sorry to steal from you @ch1ck3n but its catchy

here is the github;

most of all, Have FUN!

UPDATE: YAY! 100 Upvotes! Thank you so much everyone!

UPDATE: YAY! 150 Upbotes! I thought max I was getting half that! Thanks everyone!

Just added this fancy new thingamajig. Go upvote the makers post. He doesnt have enough upvotes for what he has created

And since tis weejio game is so pog, I composed a song

Updoot Train is coming to town

@BillNyeScience haha I'm not sure if Bill Nye the Science Guy even knows coding lol.

thanks! And also I had the idea for multi snake every since my first snake game with the AIs trying to kill you. It had nothing to do with your post (just clearing the air) @ruiwenge2

super laggy though ... nice so i updoot

This is probably the best innovation ever put into the Snake game. What impressive code, with the aesthetics and gameplay @sojs!!

very cool, although if you turn too fast (like if your heading left and you hit w then d) you run into yourself because the snake doesnt go up/down before turning right

yup. Got to wait a tick before turning. @SeamusDonahue

one more thing: is there any good tutorials for making multiplayer games? seems like a lot of them don't work in the context of replit... or maybe im just dumb :P @sojs

hmmm.. im not sure... I will work on one though... in node.js though not sure if you'll like that. @SeamusDonahue

okay, cool! It is the same syntax and things... but it uses another thing called modules. find a tutorial here@SeamusDonahue

a lot of that was just js syntax, the only new thing was require() which I haven't used before, is there a tutorial for making multiplayer within the context of replit? @sojs

as far as I can see this is a pretty good one. It uses canvas though (a good thing), while mine uses the <table> element@SeamusDonahue

I am making one right now called "making games with <table>". Wait a day or two for that one. Then you can apply the same concepts used in the first on to this one. @SeamusDonahue 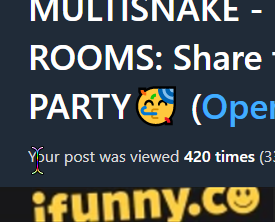 if the game is laggy maybe try requestAnimationFrame?

doesn't work for me

go it to work again. Just a bug that occured when I rolled it back to solve another bug :) bug after bug after bug. Thats all my life is :) @rickysong

@sojs oh sorry i was responding to

go it to work again. Just a bug that occured when I rolled it back to solve another bug :) bug after bug after bug. Thats all my life is :)

wait @CodingElf66 your that terminal chat guy? I just realized that!

@sojs Now we both celebrate together for being on REPLIT TALK (SHARE) HOT! Let's go! Hope we go on Trending!

@sojs We both made it to Trending yay! Congrats to you!

@ruiwenge2 ooh, u live in nyc?

@sojs lol I mean I’m working on it

it makes it super fun! @Tylerjusfly

Umm, I can't login to Socialrumbles i'm using the right email/username and password

@GordonHuang4 did you verify your email? nvrmind it seems it is working for you now, are you the user MinecraftIsCool?

Snake 2 - Where the apple chases you and you have to hit the AI which is constantly running away .-.

ohhhh... that could be fun. Good idea! @QuickV

I beg thine to make it.... You must with a title as good as that xD

haha sure ill try and make it! All credits for the idea to you! @QuickV

you can fork my impossible snake repl and mess around with it, the framework is all there, you would just need to change a couple things. @QuickV

I mean originally from scratch, though I'll try messing around with everything lol.

haha sure ill try and make it!

So it as been confirmed, it's coming SOON .-.

All credits for the idea to you!

Maybe the apple can chase you across the repl.it interface?

Kind of like Animator V.S. Animation, but it's Player V.S. Apple lol

okay cool! Also, if you want to join the multisnake discord, here is the link: https://discord.gg/Np7vBvEtp2 @QuickV

silently wishing she had discord 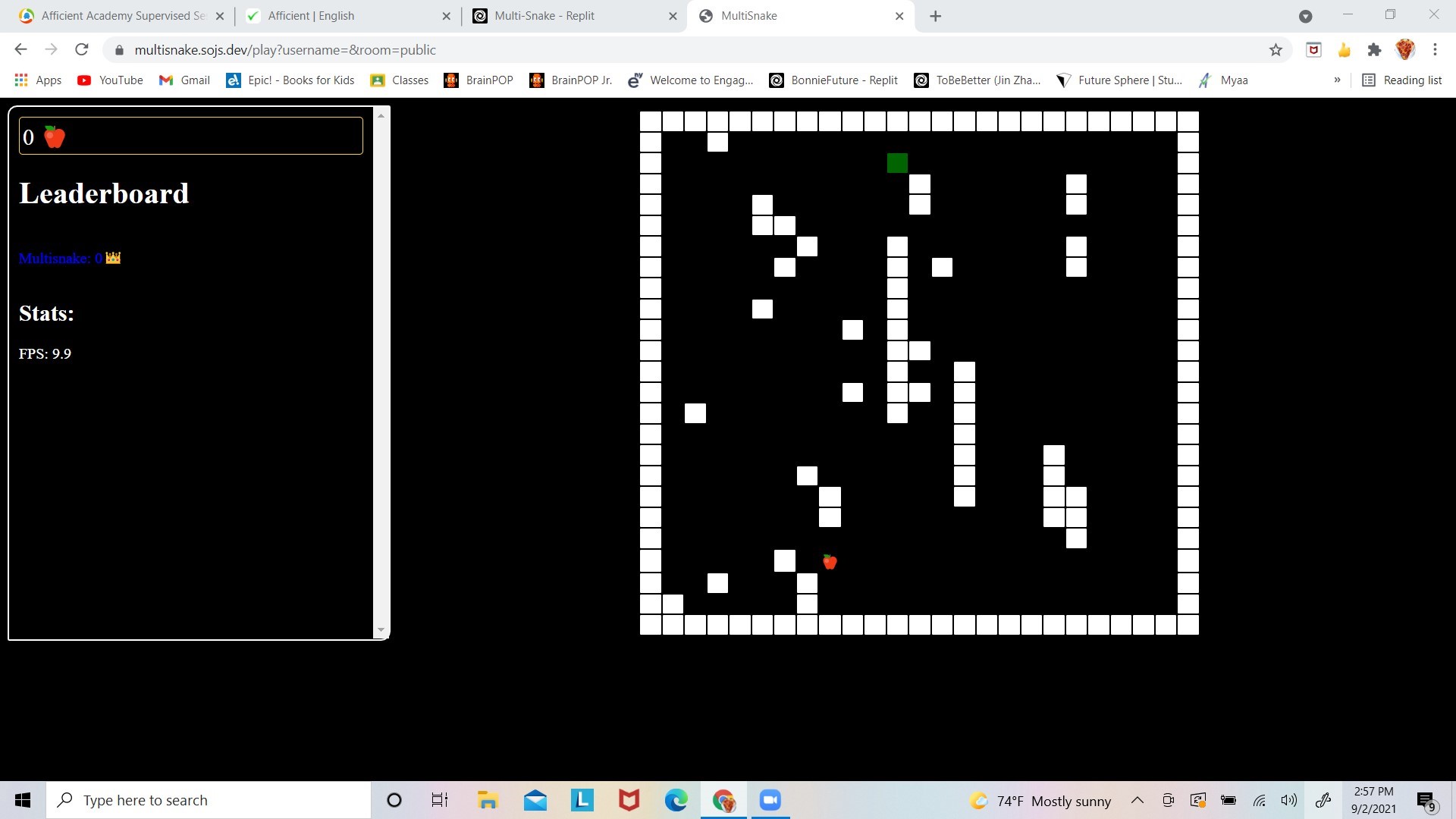 yes, but thats not multiplayer. @dylanlovestocode

started up the game and immediately died. anytime I try to continue is immediate death too

yup. A block spawned right in fron of the spawn. Just put in new constraints so that wont happen again. @doveflight663

MY MAN STOLE MY IDEA

Hmmmm.... We Couldn't Reach Your Repl

yes.... I am working on that. @SeamusDonahue

if snek could spek, snek would be proud

Sounds amazing, can't wait till you get the site back up to try it!