Welcome back guys to another game by me! Today, it is a Kingdom Simulator.

Thanks to the following. Without you, this wouldn't be possible:

@PattanAhmed, I need your code for the typing effect (Gta 5 in text). Thanks SO much.

@Bookie0, your comment on the Company Simulator didn't just help @OldWizard209, but it helped me!! Thanks; the colors really help.

And last but not least, @OldWizard209, you gave the idea for a simulator after your amazing Company Simulator! Thanks for the idea.

To play the game, you can make alliances, rage war, etc. I really can't explain it further other than you're a king/queen and you want to gain xp.

This game only has one bug. I have tested this game 10 times, so the only bug I found is your level doesn't really increase. I'm trying to solve this. Other than that, the entire game is fine.

You struggling to get to 1000xp? Here are some tips to be a pro and this game:

When you rage war, that person becomes you're enemy. Also, when you attack an alliance, they become you're enemy. Land doesn't really matter in this game. Also, sorry if you get robbed first thing, the other countries rob you randomly, so yeah, you might get robbed and lose on xp.

I really don't know why I keep doing leaderboards, but yet again, I made a leaderboard. This time, show your xp! My highscore is 14500xp.

Thanks for crediting me. I am happy that you got helped :)

@PattanAhmed, thanks. And no problem. 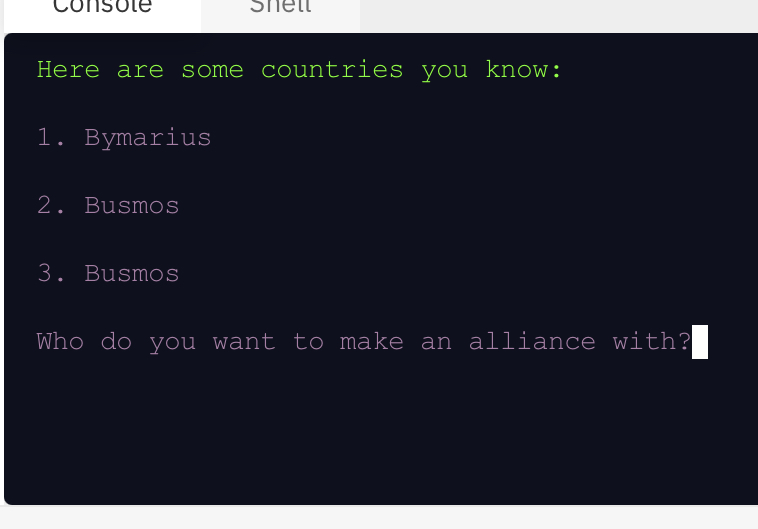 @NeilBhaduri nice game, other than that! Except for an error, i ‘m not sure what happened. :(

@SilvermoonCat, it was just it took two random countries form the countries list and they turned out to be the same.

@NeilBhaduri Maybe use some if statements to check if the countries are the same, and switch up the names.

@NeilBhaduri I know, I mean another error. Ah, forgot to screenshot, welp ;-;
Love the colors in here! I’m a picky color person but this actually looks great to me xD

@IntellectualGuy, nice idea! I will try adding it.

Dude this game is by @Darknight not him

@ninja2k11, i like being called darknight, but my username is @NeilBhaduri 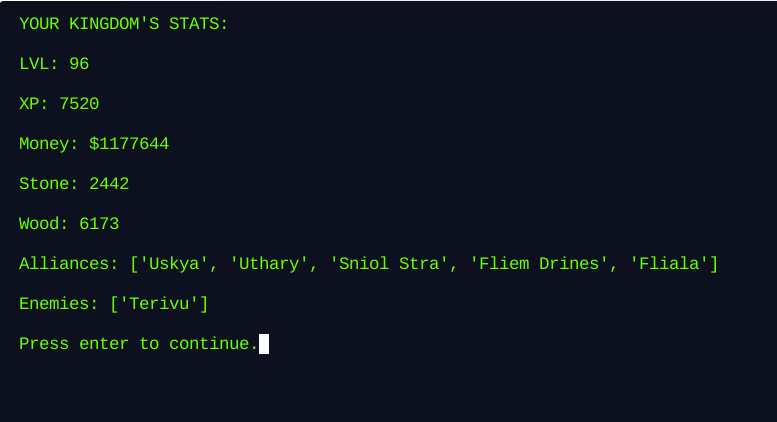 Now I am all powerful.

I got disconnected after this huge income, but it ended with a wapping ~14500xp and level 122!

you should change the beginning to "wage" ware not "rage" war.

I don't see anything wrong...

@NeilBhaduri, i was just saying that Rage war is not the same as Wage war.

you might be right @kingdracorex. I will check it out.

wait what are wood and stone for?

@noway15, wood and stone are used to trade, and are also a life line. If you run out of them, you lose. So basically another way to die.

you so hacked @fishers14 on that game

nice @fishers14! You beat me 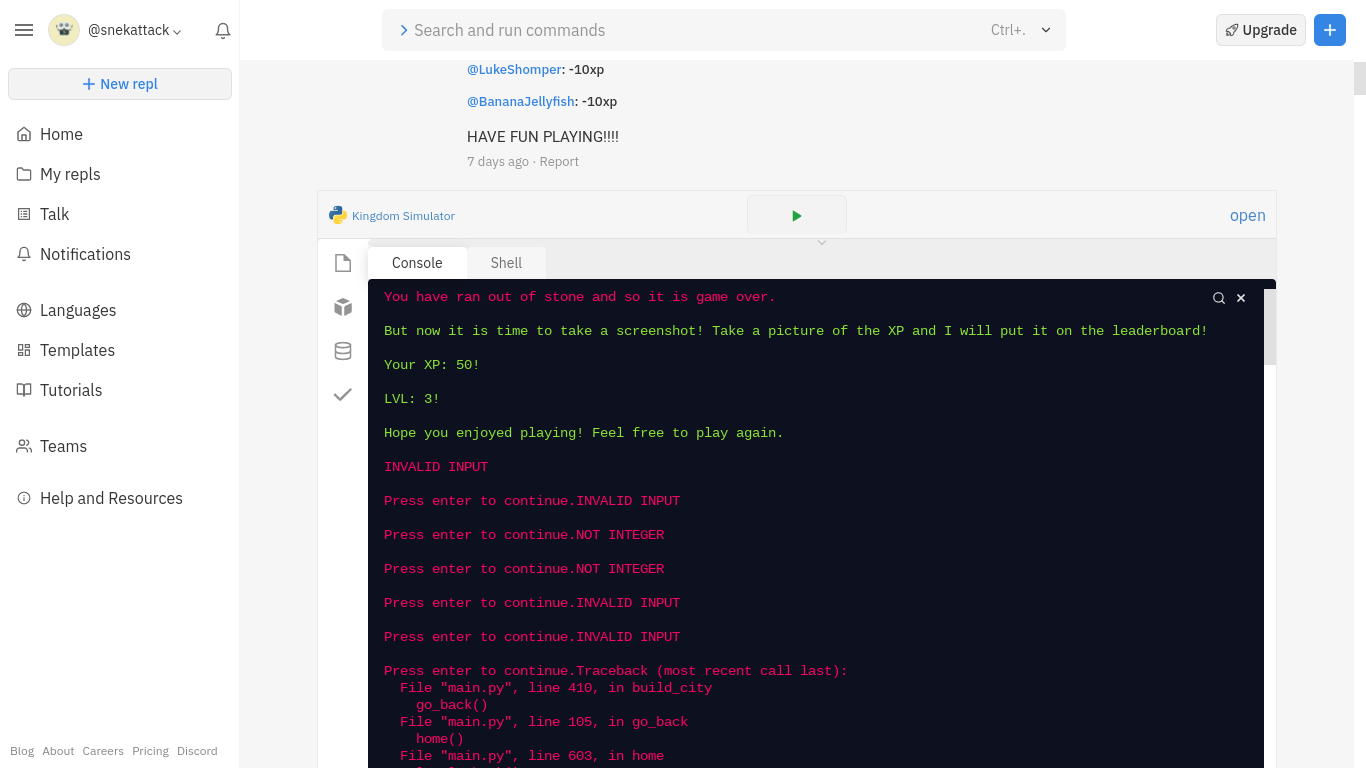 i recommed that you add the leaderboard ingame

Can you help me with a game of mine called fishing sim? Ask for permissions and i'll accept if you wanna help. @NeilBhaduri

@ModderGG I will think about it.

@NeilBhaduri level 4 and 20 xp is my highscore 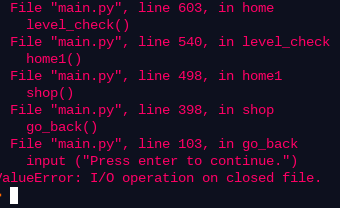 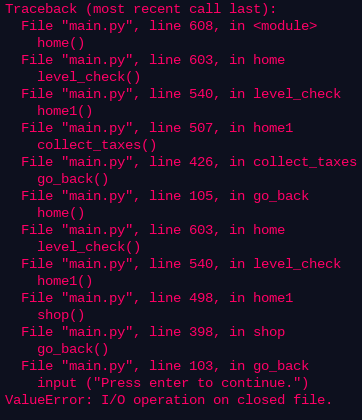 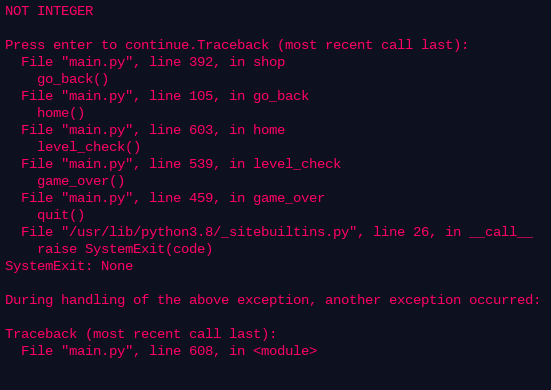 My score was great

@NeilBhaduri it was a joke

@NeilBhaduri No, thank you for creating this project!

@NeilBhaduri Can I ask you how to actually win the game with over -10 xp as the first thing it always says is that I got robbed by struella.

@ModderGG, are you saying that you hacked the game a bit? 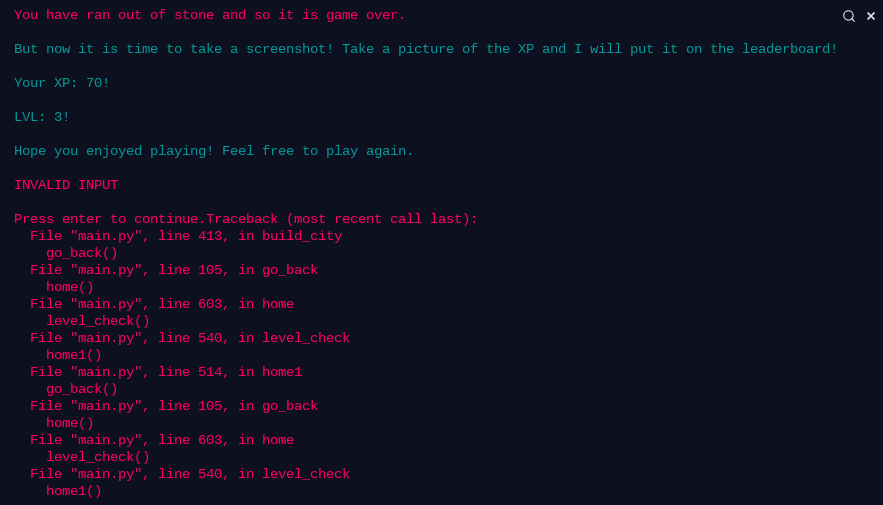 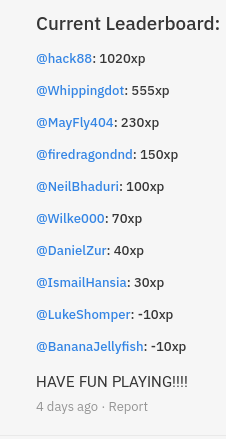 whos the king of the castle

Omg. @hack88, i really do think you hacked (jk) and that is so impressive.

@NeilBhaduri Thanks (i didn't hack it lol, i have a strat)

poopland, i shall miss you

@BananaJellyfish, that is unfortunate, anyways, still, you get tied for last placed.

I love this leaderboard @NeilBhaduri

Thanks @BananaJellyfish! I will make more leaderboards in the future.

Yay I can get on leaderboard :DD

Yea you sure can

The game runs itself lmao

I presses enter few times and switched tabs. After that it started to run on its own :D

@DanielZur, I know that trick. Still, you named yourself " " so your name is Emperor

@LukeShomper, really, your xp is really low, but I will still put it on the leaderboard.