Wish you the best of luck for your future. I hope your special day will bring lots of happiness to your life. Always be happy and safe! (〃＾▽＾〃)

This site is a Birthday gift for @ApoorvSingal from the whole Repl.it community! ＼(＾▽＾)／

Feel free to send birthday message and anime recommendations on the site.

Thanks guys! The website is soo awesome! I love it! And thank you for all your wishes people!

owo I did, didn't find anything tho. What did you send? And how do you have my email lol? @CodeSalvageON

@ApoorvSingal Oh, I don't have your email. The "check your mail Santa denier" is from a meme about the Unabomber.

I love the design, and the anime recommendation section is very cool

A Homo Sapien: Uh oh... incoming cake shower! Wait, cake showdown... dang it I just ate lunch! Oh well, captain, we need a giant fridge to catch all the cakes and a huge birthday to to cover up this extraterrestrial(lol I can spell) incident.

The Captain: Well, I checked Replit and it is @ApoorvSingal (Sorry for the mention, I know your inbox is probably blowing up) Birthday!

A Homo Sapien: Why Apoorv?

The Captain: Cuz a lot people commented on the post.

A Homo Sapien: Now we just need a fridge.

The Captain: Do some Homo Sapien magic and make it appear.

A Homo Sapien: Or... I could make all the cakes disappear...

(A Homo Sapien called his friends and they start gobbling up the cakes.)

The Captain: You finished?

(A Homo Sapien and his friends finish eating.)

A Homo Sapien: When's our next meal?

The Captain: Faints and forgets to exist.

@Codeverse lmaoo not sure what exactly this story is but Yayy! Thanks!!

@ApoorvSingal That's ok, I guess it is the thought that counts lol

smth sorta inappropriate on there

@SilvermoonCat we have an admin panel to delete 'em, thx for informing :)

@SilvermoonCat yeah i removed it :)

Yea we are sorry about stuff like that if they pop up, we have tried to prevent stuff like this happening but some people just try to find loopholes

oh, btw I did two, but the first one was an accident. it was the wrong anime, hope you can forgive me, sorry. 😅 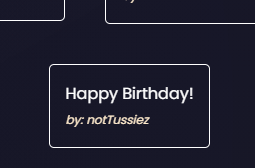 Happy(late sry) birthday @ApoorvSingal
Say... the only anime or shows I watch is Days and another one I cant remember the name of but its chinese and japanese.

Thanks @LingWu1! noted. Will binge-watch it really soon lmao

Naruto is really good, both the original and Shippudden :)
@ApporvSingal

Thanks @DREWNOLT! Lol yess! Why do you think they call me kaka

@ApoorvSingal Lol! Do you read the manga, or do you watch the anime?

@zplusfour Thanks zplusfour! Aight, time to binge-watch it then lmao

Happy birthday! How does it feel to have a second quarantine birthday? @ApoorvSingal

@IntellectualGuy Thanks! Lmao I have been in quarantine ever since I started coding...

I really like how the words fade at the top of the page, well done! :D

This is so cool!

Happy birthday Apoorv! Many happy wishes to you and your future!

Where's you learn this Awesome Node.js?

@WilliamXing node.js is done by none other than our bro H aka @TheDrone7 :)

Wow! Where did he learn Node.js? @lilykhan

@WilliamXing I did not have any specific place where I learnt it from, just copy-pasted from random places mostly and read my own code later and found what I coded by looking up what each statement does separately. I had my own dumb way of learning lol.

More importantly, what about this backend is impressive lmao, it's awful compared to my own old stuff.

Also, try not to recommend more than one anime. Ty.＼(＾▽＾)／

@EpicGamer007 if they r diff then u can suggest, ppl just suggest every season or movie so it kind of makes the spam that's y I asked not to, but still thx :)

Happy bday! How old are you now?

IT'S REALLY AWESOME TO SEND FOR FRIEND