Alone Simulator (My personal Favorite of my projects!)

You are the host of a TV show called "Island", Based on the popular TV show "Alone". You, in the beginning, are in control of what stats each contestant gets, and with your selections, you get to overview who survives to be the last one alive!

It is basically Sanctuary Sim but more in detail

Thanks for the suggestions

Thanks to @ReaperZ0v for giving me some ideas on the design for the game!

In this game you can test out whatever crazy stuff you want to, just go for it!

I will be updating this game as it is my favorite project on Repl.it that I've made.

Get used to my new profile picture!!!

From the creator of Pitlife 2, Sanctuary Simulator, and Angel Simulator
Please upvote!

Alone simulator? Okay, if you're going to base a game off my current life, at least get my approval first

HAHAHA!!! I was just looking at your characters and I saw "pam, Jim, Michael." then I was like aren't those the characters from the office? yes. yes, they are. ( also I love this game almost as much as I love the tv show and I really love the tv show)

lol, you caught me! Thanks so much! @elijahnik1

Yeah, but i just randomly put in some characters, tried not to make it to obvious @elijahnik1

@BobTheTomatoPie I guess that's true. too many people would recognize that name.

yeah, btw you can add custom names in the beginning @elijahnik1

Lol, have you tested the custom events, the whole goal for the game was that you design it basically @elijahnik1

No! I haven't, but I guess I will because I'm sitting here bored. did you just add custom events? @BobTheTomatoPie

no first release, right after releasing custom animals, you pick the events when you pick the names @elijahnik1

I honestly don't know how I missed it lol. I must be blind. @BobTheTomatoPie

Lol, im glad you like this game, it's not a very popular one of mine @elijahnik1

well, my most popular post has 5 likes hahahaha! so this one is 12 likes better.(plus your good at making games) and my final AI has 0 likes :) @BobTheTomatoPie

I'm sorry about that, ill like it for you, my games have been dying in popularity now, they used to explode with like 60 likes. @elijahnik1

if I had 60 accounts I'd like each one of your things 60 times.(thanks though!!) @BobTheTomatoPie

thats so nice, I liked all your posts for you, how long have you been coding? @elijahnik1

start of the school year. first time taking computer science. (in other terms I am a newb/noob) @BobTheTomatoPie

oh, I started halfway into the year. I learned almost everything from Stack Overflow @elijahnik1

@BobTheTomatoPie I was just looking at the things you have made. And I dunno, but my close second favorite is pitlife2

Its what i use every time i have a question @elijahnik1

Yeah that one took me five months to make, that was my big project, I made it for my cousin and if i hadn't made that i wouldn't know anything @elijahnik1

it's really amazing!! it reminds me of bit life.( you know I started repl at 11 am today and haven't gotten off yet...) @BobTheTomatoPie

Thanks!, I check on and off throughout the day. It's my favorite site for coding, they can't make anything better. I use Repl more than Unity @elijahnik1

never heard of unity. is it good and interesting?(IVE FINALLY TRULY FINISHED MY REPL!!!!!)@BobTheTomatoPie

Wow, You've never heard of unity? It's easy to use and you can make beautiful games with graphics. It's free! It's not a website but you download it and the possibilities are endless. You have to know C# tho, but it's very easy to learn. @elijahnik1

I have heard of C#! (lol i actually just heard of it yesterday) I have a question for you: in your life2 game is there a way to age fast? @BobTheTomatoPie

lol I just realized as soon as I posted that comment that I could just hit one. I feel so stupid....maybe its because I am tired. @BobTheTomatoPie

Lol, had you ever gotten past one? @elijahnik1

can a date ever go well when you are thirteen in your game? I've tried like 9 times and they have all failed. @BobTheTomatoPie

Idk why, that is so odd, I've never had that happen, its like a 50% chance @elijahnik1

I counted. 20 attempts. finally got someone...probably the bottom end of people lol. @BobTheTomatoPie

lol, if it took that long. Btw in the first version of pitlife everything went into the dating so it wasn't just luck @elijahnik1

its like "wait...is that elijahnik....yes it is. he has to stay single in real life and in a game forever bwhahahahaha!" @BobTheTomatoPie

Lol, yeah my game totally just figures that out @elijahnik1

Pitlife 2 so easy, number one is awful its unorganized, you have to type in actual words, and the possibilities don't go to far @elijahnik1

at the rate im liking all your things, you will be at 400 by tomorrow. @BobTheTomatoPie

tbh I didnt think I'd make it to 15 ever lol. @BobTheTomatoPie

Welp your at 32 now, congrats! @elijahnik1

k. I have a girlfriend who likes me 70 percent and she wont get married! I'm like almost 40 in the game! @BobTheTomatoPie

Lol, did you leave her? @elijahnik1

nope. gonna still try to get married before I [email protected]

Lol thats good, do you have children? @elijahnik1

and my health sucks @BobTheTomatoPie

FINALLY, 56 and she accepts my [email protected]

Have you checked your traits? @elijahnik1

yes it is. she's a tough [email protected]

How many times do you think youve proposed? @elijahnik1

no, but im going to and ill tell [email protected]

Ok, you better hope they are good, you haven't done anything under the label "Harm" have you? @elijahnik1

A WHOLE LOT! i am hot tamale, traits are happy and [email protected]

no, i tried murdering when I was 12 but it didn't let me so I haven't tried [email protected]

Dang your a hot tamale and got rejected that many times, that's not always what you want to know in the dating world @elijahnik1

No, in activities there is a section called harm @elijahnik1

hahaha! i know right!!! im also unemployed all my life too . @BobTheTomatoPie

Wow, start a bussiness its broken so you make a lot of money quick. @elijahnik1

nope havent done any of that [email protected]

nope. ill be a dumb dumb and never have a [email protected]

im going to get hit by cars. :) I loooove this game!!!!! (anyway I've gotta pray then go to sleep) [email protected]

Lol, you can write songs and stuff also @elijahnik1

Edit - Also I recommend making the game break proof. If i enter a letter towards the end by accident i have to start all over again. This is a normal in all programming languages

Yeah i'll get fixing that, i'm jsut confused on how to make it not accept letters @Kopamed

I'll try that in a bit @Kopamed

@Kopamed input validification is sooooooooo annoying to implement. I just find it easier to trust the user in making the right choice

People will dislike your project if all their hard work is reset by a misclick. @DynamicSquid

Don't worry Jason, I made you invincible. Hang in there buddy!

Lol did he win? @DynamicSquid

this is epic man! LOL you finished your game and I still need to code the other adventures in my game 😂. But great job on this 👍🏼

That's gonna be awesome, can't wait to try it! @ReaperZ0v

@BobTheTomatoPie and need to add more tools like hidden blade and knife :D

I'm excited, I'm really happy with the symbols next to the events in my game, thanks so much for introducing me to that @ReaperZ0v

@BobTheTomatoPie no problem :D and thanks for mentioning me in this epic Repl :D tonight I am gonna get some redbull and upgrade my repl game :D

Thanks! Gl with your game! @ReaperZ0v 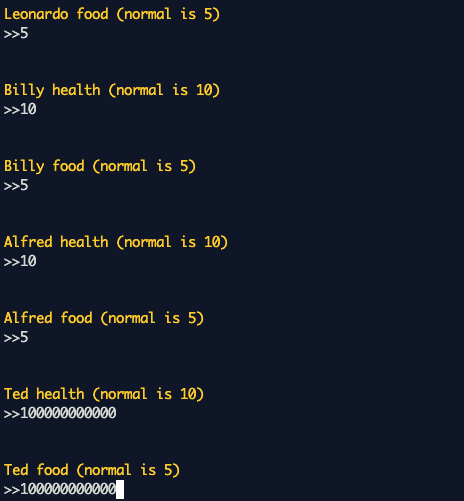 Q: Why is Ted overpriviledged?

@BobTheTomatoPie, You are gonna have to do a 300 cycle special soon. 😂

Yup, I was a little late one my 200 cycle special @AbhayBhat

Lat time I checked you can't craft burgers with wood or stone.

It seems like the fish and lions are teaming

On start:
Add custom animals: Bob
Add custom names: A tiger
Add events: Good events: has eaten a small human.
A tiger health: 100 A tiger food: 50
Everyone else's health: 10. Everyone else's food: 5
The Daily events(only the funny ones):
[!] A tiger built a shelter (everyone else- NOOOOOOO!)
[X] A tiger got injured while running (John- He was chasing me when it happened)
[*] A tiger has been running out of food (but, wait, I gave him 10x everyone else....)
[X] A tiger's area was attacked by a bear! (but who won the fight?)
[X] A tiger was mauled by a bear (I guess now we know)
[*] A tiger ate a snail out of extreme hunger. (jeez, did you eat all 50 food already?)
[!] John has eaten a small human. (LMFAO. I meant for this to show up in the tiger's daily events... )
[!] Miley has eaten a small human. (Like everyone except the tiger.... This is getting kind of creepy.)
[*] John fears they might die. (what, worried a small child will come for revenge?)
[!] A tiger has eaten a small human. (FINALLY)
[X] A tiger cut their hand! (Don't you mean paw?)
[*] Toby is starting to go crazy
[!] Toby began looking for clams (yup, here's the crazy coming out)
[*] A tiger started yelling at the fish (C'mon, I'm hungry, and I don't want to get my fur wet!)
[X] A tiger was mauled by a bear (jeez, you got to stick up for yourself tiger.)
[X] Toby has died! (tiger sized footprints found nearby)
[*]Miley is starting to go crazy
[*]Miley is starting to go crazy. (We heard you the first time.)
[*]A tiger is feeling oddly tired. (Did the small child he eat have a sleeping drug in his pocket?)
[*] Miley screamed at the birds (what did they do wrong?)
[*] Miley started yelling at the fish(sheesh, your in a grumpy mood today.)
[X] Miley fell off a rock! (Karma!)
[X] A tiger was mauled by a bear (eat him, eat him, ...)
[X] A tiger was attacked by a bear!(but, he just mauled you.... Did you escape?)
[X] A tiger's area was flooded! (NO!!! WATER!!! SCREAM!!!!)
[X] Miley has died. (was carried off by birds and dropped into water, where fish ate her. Revenge!)
[*] A tiger took a swim(got over our fear of water, did we?)
[*] A tiger is feeling oddly tired
[*] A tiger ate a snail from extreme hunger(that's why your tired, all this exotic food)
[*] John is running out of food. (sneak peek: Starvation ahead.)
[X] John has died. (yup. Starvation)
The winner of the show is....
A tiger!!!!
They won $1,000,000!
(but where can they spend it? I mean, If a tiger comes into a store where I'm working at, I certainly ain't sticking around to play cashier)

Now hold on a minute. I realize this is version 1.0, but how can leonardo have -4 food?

Damn... Leonardo got mauled by a tiger 4 times in one day...

It would be funny if the host was an animal in this game.