Note: Many ciphers are labeled "Coming soon..." since the explanations will be long and would preferably be added in edits to this post.

Cryptography is a great field which combines mathematics, linguistics, and computer science with real-world applications. For example, cryptography is allowing you to see this right now! Repl.it uses HTTPS (HyperText Transfer Protocol Secure) which encrypts web traffic. What happens is that the Repl.it server encrypts the content of the website and sends it to the Internet where browsers like the one you are using right now decrypt the web traffic to provide you with this wonderful coding website and this post which is on that very website.

In order to understand what is going on with web traffic encryption, you need to know cryptography.

However, this is not what is used normally in alphanumeric codes in other ciphers. Other ciphers normally use A0Z25 where A=0, B=1, C=2, ...

Alphanumeric codes can be free-standing ciphers like A1Z26 or can be incorporated into other ciphers like what is commonly done with A0Z25.

Affine Ciphers are a class of ciphers which follow the expression a*x + b mod 26. In this case, x is the alphanumeric code for a given letter in the plaintext and a and b are the keys. mod refers to the modulus function which returns the remainder from dividing the number before it by the number after it and is normally referred to in programming as the % operator which is used in many languages, including Python and JavaScript. This expression will return the alphanumeric code for the letter in the ciphertext.

Decrypting, however, is a little tricky...

The ROT-13 Cipher is a Caesar Cipher with b = 13. The interesting thing, however, is that encryption and decryption result in the same values since the range of alphanumeric codes is from 0 to 25 and 13 is right in the middle of that.

Cryptanalysis of the Affine Cipher

To decrypt the Affine Cipher without the key, you just need two different letters to be known. Either, these could be intercepted somehow from the encryption source, guessed based on the context of the encrypted message, or figured out by using simple methods such as the one-letter word method where you just know that one-letter words are either "a" or "i" and use these to decrypt the cipher.

Using two given letters where x_1 and x_2 are given in the plaintext and c_1 and c_2 in the ciphertext, you can just use a system of equations between x_1*a + b mod 26 = c_1 and x_2*a + b mod 26 = c_2. To solve this, subtract the two equations, remove the modulus, and add 26 to the right side until an integer value of a would satisfy the equation. Then, solve for a and substitute a into one of the original equations. Then, solve for b to finish getting your key. Then, just decrypt the rest of your Affine Cipher using the key and your cryptanalysis is complete! 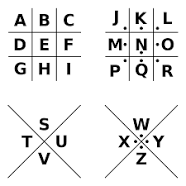 All you need to do for the Pigpen cipher is look at the tic-tac-toe board and the x and draw the borders around the letter you are looking for and add a dot if on the second tic-tac-toe board or the second x. For example, A would have a line at the bottom and right with no dot while Y would have a diagonal line going towards the top right and another going towards the bottom right with a dot.

The Atbash Cipher is another special-case monoalphabetic substitution cipher where the alphabet is simply reversed. In this case, A=Z, B=Y, C=X, ...

Cryptanalysis of the Vigenere Cipher

One way to cryptanalyze (decrypt) a Vigenere Cipher is to use a plaintext attack known as a "crib". This means that you have some letters known in the plaintext. Using these letters, you can subtract the ciphertext letter's alphanumeric code from the alphanumeric code of the plaintext letter and apply modulus 26 to get a number to gain the alphanumeric code of that key letter. In a Vigenere Cipher, the key is also normally a word, so, given certain letters of a key, but not the entire key, it is still possible to gain the entire key by just guessing and checking to make sure that the completed key would create an understandable phrase.

The Kappa Test, created by William Friedman, is a test to determine the length of the key in a Vigenere Cipher to then be able to test letters in the key to cryptanalyze the cipher. It is based on the index of coincidence, the probability of two randomly selected letters to be the same, approximated at 0.0656010. By determining the probability of selecting two random numbers and them matching (determined by frequencies of letters), you can estimate the length of the key of the Vigenere Cipher. The PDF I used to get the information on the Kappa Test also includes the formula and a table of key lengths that you can use if you would like to use the Kappa Test, but the Kappa Test is an extremely advanced method of cryptanalyzing the Vigenere Cipher, which was for a long time considered unbreakable.

The Baconian Cipher, however, normally has one or more A values and one or more B values that you must figure out. However, most groups of letters start with A, so starting with the first letter as A is a great place to start. Also, weird headlines with five-letter words and/or two-letter and three-letter words side-by-side and no words with more than five letters are normally just masked Baconian Ciphers where every letter used in the headlines corresponds with either A or B, normally in a pattern.

This post is based on a conversation on cryptography with @LizFoster and @Highwayman in the learn post https://repl.it/talk/learn/Lets-talk-about-p/31380 (feel free to learn about π in that post once the 404 and 500 errors get fixed!) and the content of this post is based on information gathered over the past few years during my journey into cryptography. Information on the Kappa Test is from https://www.nku.edu/~christensen/1402%20Friedman%20test%202.pdf

2 years ago
You are viewing a single comment. View All
AmazingMech2418