Who is this for: If you're a developer interested in NLP and don't know where to begin. Or you have a data science background and want to learn NLP.

How do you represent language in a way that can be used in NLP tasks? This means to represent words in a way that captures their meaning. For example, this is the meaning of probability: the extent to which an event is likely to occur.

Can you just use the default way computers represent strings? Ultimately, all data on a computer is stored as sequences of 0s and 1s. Strings are a sequence of characters and each character is represented by a number. Numbers are then internally stored in a 0/1 format. This is only useful for computers to manage words, but it doesn't capture the meaning of a word like probability at all.

If this was a comp sci lecture, I would be telling you about wordnets and one-hot vectors. Maybe even show you how to implement them, get you all excited, and then tell you that they don't really work well. I'll mention briefly what they are so you can understand why modern methods work better.

WordNet is like a thesaurus in that it groups together words based on senses of words. In the below image, you can see that motorcar is a motor vehicle, and it also contains subjects like compact and gas guzzler. Trying to capture relationships of each word, and all the senses of each word, is extremely difficult. Agreeing on the senses and boundaries of a word is also not simple. These are just some of the limitations of using wordnet. 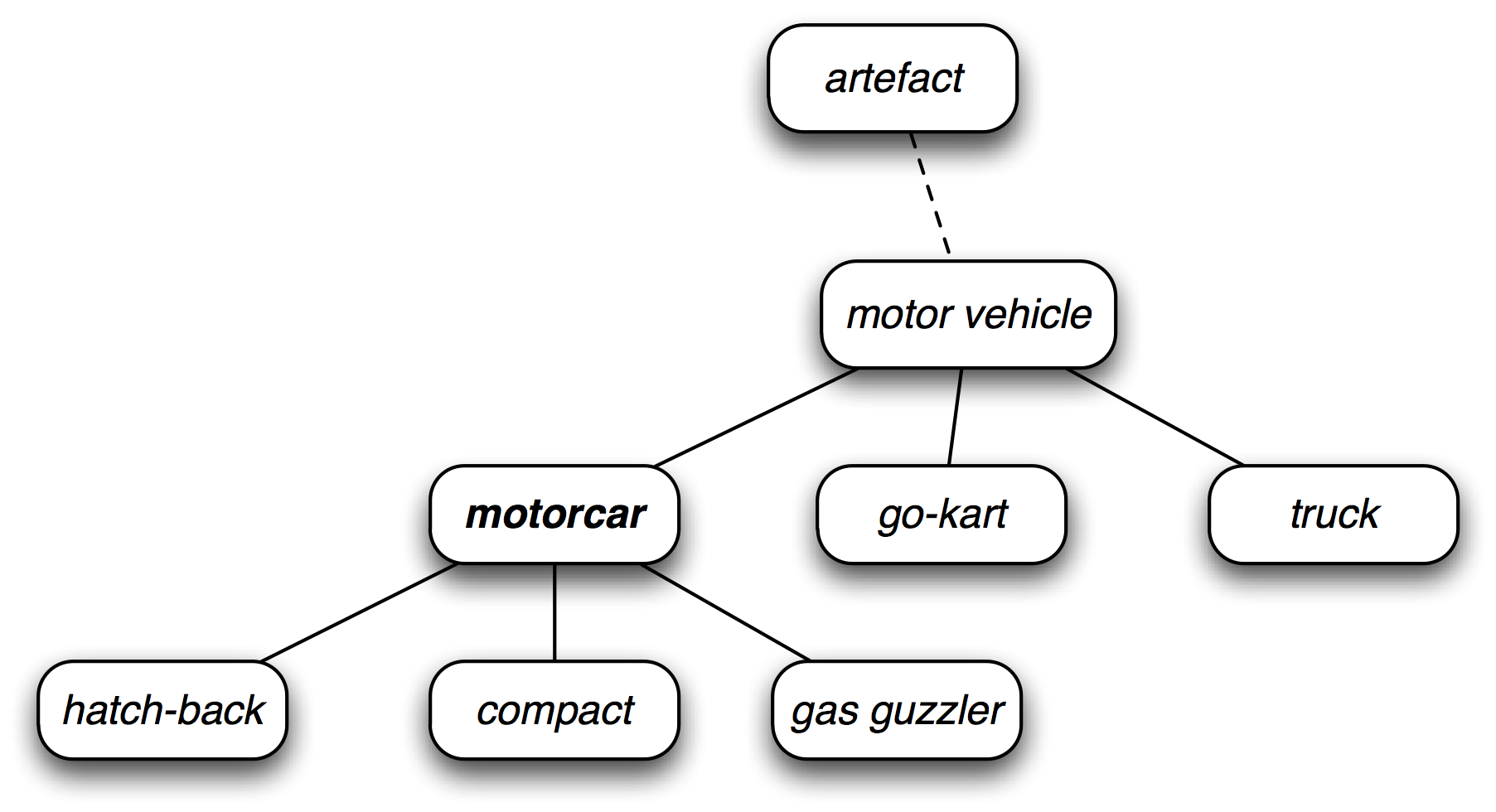 One method you may see in many NLP tutorials is to use one hot vectors to represent words.

Although this is commonly used in beginner NLP tutorials, you can see that it doesn't capture the meaning of a word.

In most cases, the meaning of a word is its use
Wittgenstein

Contextual meaning brings us to how modern NLP represents words. The meaning of a word is determined by how it is used. Try this thought experiment. If you didn't know what tiktok was, one way to find out is to gather all the sentences where tiktok is used. Then figure out the word by how it's used in all the sentences.

From these example sentences, you can figure out that it's a mobile app that has many users, and people use it to make and share 15-second videos. This kind of resembles how people actually learn what new words mean. But how do we create a program to do this for us?

This plot shows a co-occurrence matrix for the words Siddhartha, Govinda, Buddha, and enlightenment from the book Siddhartha by Herman Hesse. It looks like Buddha is closer to enlightenment compared to Siddhartha!

It looks interesting, but what does it actually mean? So the above plot is made using all the words from the book Siddhartha. As you go through each word, its context is the set of words that appear nearby.

Let's go down the left side column. The first word is Siddhartha, and in the sentence above we can see that there is only instance of this word. For that instance, it has two context words (one on each side): before and a. In that row, you can see there is a 1 under both of these words.

First we have to get the text from the book. Fortunately, the copyright has expired, so it's available on Project Gutenberg.

Now that we have our dataset, the next step is to get all the distinct words.

We have 4470 distinct words in our book! If you print(corpus_words) you can see what they are. Now we're ready to create a co-occurrence matrix just like the small example above.

The shape of this new matrix is 4470 by 4470 (number of distinct words in the book). We're almost there! How do we turn this huge matrix into something we can plot out on a 2-d graph? This means we have to turn one dimension of the matrix from 4470 down to 2. What is this magic?!

There's a technique called Singular Value Decomposition (SVD) that can do this (let me know if you want a post explaining SVD). We will use scikit-learn's TruncatedSVD method which can work well with sparse matrices.

Now that we have a 4470x2 matrix, we can visualize it! We're going to use Matplotlib to create a scatter plot. Substitute the words in words_to_check for any words you want to plot.

There you have it! Your own 2-d plot of word embeddings based on a co-occurrence matrix. It's not magic at all ;)

I don’t understand a thing