Hello to-be master coders! You have decided to learn Python, this is great news! If you are new to coding Python is the place to start, it is known as todays BASIC. If you don't know what BASIC is, it is was pretty much the first programming language. Anyway Python is a really easy programming language that you should grasp fairly easily, if you have coding experience you will fly through this!

How to set-up Python

You can use replit.com or you can go to python.org to download python on your computer. On the page you will see this ->

Select downloads and install the latest version of Python 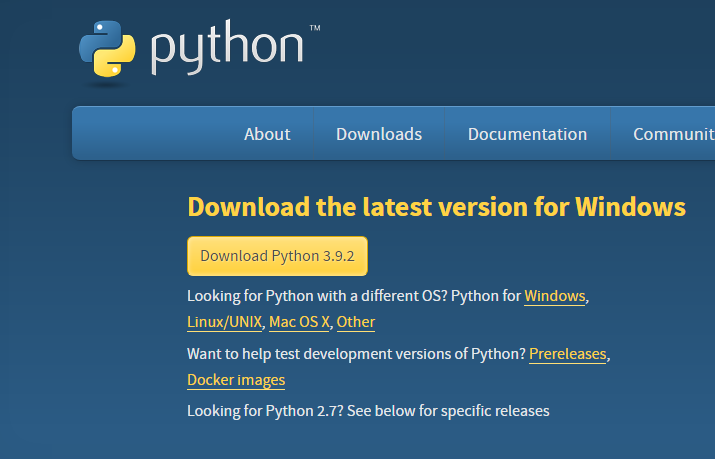 Currently the latest version is 3.9.2. However I have 3.9.1 installed on my computer. Now in the search bar type "IDLE python" and open that, if you are using replit.com then you don't need to open IDLE. This is the Interpreter that comes installed with Python.

Now to the good stuff(code)

First we are going to go over some key vocabulary:

When displaying text that a variable contains we can insert the variable inside the parenthesis,

You can also do maths,

A variable holds data of any one of the data types. A variable consists of two parts, the identifier and the data. identifier = data. There are rules around what the identifier can be, it cannot begin with numbers or . It must begin with either an underscore _ or a letter abc. It cannot be a Python keyword or contain any symbols other than _.

A comment is a line of code that when run the interpreter ignores. They can be used to tell other people what your code does. They look like this

Input can be gathered from the user using the input() function. They can be stored inside variables and printed.

You could also use concatenation (Which is the joining of strings) to provide a response from the computer.

That is it for our first python tutorial, keep an eye out for more and please comment if you want more and if this helped!

9 months ago
You are viewing a single comment. View All
[deleted]