So lately I have been seeing a lot of full course tutorials, this isnt full course but yeah.

I have been busy with school a lot but now I can write this tutorial for YOU :)

Ruby is yet another programming language and it is in a way similar to Python, if you know Python then Ruby will be a breeze.

Ruby is an interpreted, high-level, general-purpose programming language. It was designed and developed in the mid-1990s by Yukihiro "Matz" Matsumoto in Japan. Ruby is dynamically typed and uses garbage collection. According to the creator, Ruby was influenced by Perl, Smalltalk, Eiffel, Ada, BASIC, and Lisp (cannot believe it! When it is super similar to Python)

Ruby is pretty fun and really easy to learn!

In Ruby comments are the same exact as Python! Use a hashtag (#) to make comments!

You should specify what's the difference (I think puts does a new line automatically)
~ @Bookie0
Yes puts does make a new line at the end, but you will have to google what the other two do.

So now that you know how to output strings we can play around a little bit.

If you are learning a new language I always suggest just playing around with the keywords and seeing what they do. You can do much more stuff like print "Hi my name is E and I am made in Ruby!"

If you want to use \n You are going to have to put ""s I suggest using ""s just so you can be ready for anything that happens, because who knows, when you are about to be writing a super styled Program!

Now since puts, print, and printf are built-in(by built-in I mean not in the std file) they do not need parenthese(())

Now have you made one program without variables that was more than 50 + lines long? My guess is no. So variables are pretty epic! They are an important part in the programming culture, otherwise programming wouldn't be programming.

Variables, in Ruby are similar to Python, actually some would say they are the same. So if you know python you already know how to make a variable!

In Ruby you do not really need to worry about data types, because, as you see above it accepts ints in strings! So not much different than Python...but still :D.

How to Print Variables in Ruby!

So, what is variables without printing them?
Well just random things taking up space on your computer.
If you don't do anything with the variables then its like, not a variable.
So, lets have some fun with variables!!!!
A simple variable output would be:

The code above would output: :(
Hmmm what about putting strings and variables together Eli?
Great question!
You would simply put puts with parenthese! Then, put your variable name with a plus!
Some example code:

If I do say so myself, that is a waste of code! Make the variable e and only use it once... it just doesn't feel right! We can fix this!

These are just some tips that can help you in your future programs!

This is actually fun to do in some programs, like return strings in uppercase.

Print a variable in lower case

Find something in the string

So, this basically searches the string and then returns a value(true/false) if the thing that you made it search for is in the string

So this chapter is mostly about loops, if, else, etc;

The Ruby arithmetic operators are:

There are a pretty big amount of these.

Woooooohoooooooo that was a lot

I know some of those were not that simple, but you will maybe need them sooner or later.

Continuing to If Statements

The if statement is kind of different than Python.

It doesn't have a colon (:) and at the end of the statement you have to put an end If you do not quite understand this, here is some code:

So What Does This do?

This program makes a variable assigned to 'e', and then if the variable is equal to (==) 'e' then, print 'E', after that end.

I hope that was a good explanation

Else If the epic. YAY MULTIPLE IFS BUT WITH A DIFFERENT NAME
Make an else if statement in ruby by:
elsif
Some code:

Do not put end before the next else/elsif/if statement otherwise... ERROR TIME BABY

The beautiful else :) Its else. Explanation:
If the first if is true then go through the code, if not go to the else/elsif.

So if we change pie_in_life to "squid" (haha free ping go brrrrrrrr @DynamicSquid since he/she is like copy write of the squid) then we will get:
pie confuzelled

See Ruby is fun! No colons, no semi-colons, nothing that teaches you anything about other languages and good practice! As I said a great language! But to be honest Ruby is really cool. So keep using it if you want a job!

Yay loops are fun you can print pie is epikk forever to the console and other stuff like that.
The loop syntax:

Or with some actual stuff

for: A special Ruby keyword which indicates the beginning of the loop.

variable_name: This is a variable name that serves as the reference to the current iteration of the loop.

in: This is a special Ruby keyword that is primarily used in for loop.

expression: It executes code once for each element in expression. Here expression can be range or array variable.

do: This indicates the beginning of the block of code to be repeatedly executed. Do is optional.

end: This keyword represents the ending of ‘for‘ loop block which started from ‘do‘ keyword.

Explanation: Here, we have defined the range 1..5. Range Operators create a range of successive values consisting of a start, end, and range of values in between. The (..) creates a range including the last term. The statement for a in 1..5 will allow a to take values in the range from 1 to 5 (including 5).

This is not the end of loops, there are some more, but I wouldn't know how to explain them as good as some other people, so go here to find out more about loops

So you have read this far... that means I am doing something good right?! So... lets get going on input! Input... the greatest thing ever!

So input. The greatest thing to play around with. In Ruby input is gets. I will be explaining the way I use, which I think is the easier way.

FUN :) You can also do it with all the other operators I showed you!

Now this will come out a little weird, but it is still SUPER funny

(thanks to @RayhanADev supporting me when I made up the ultimate benana.)
Of course, you can always add nouns, pronouns, etc; But this is proabaly the best project ever for now. SIMPLE IS FUN ;)

Oh wow, I forgot functions!
Functions are really important in programming because you can execute 50 lines of code with just saying hi("e")
Functions in Ruby:

A real example would be:

Easy right? The function keyword is the same exact as python.

It took me four days to make this tutorial
This has 353 lines!
And @RayhanADev for proofreading!

I know there is WAYYYYY more to a language than this. But this is the basics to get you started

When I just look forward through this tutorial, I thought you are talking about Rust lmao.

Great tutorial on Ruby, you could probably go over some more complex things

@programmeruser yeah, working on that tbh. Just finished functions and updated it.

@EpicGamer007 yes u did cause that java tutorial. Now you started a whole new life of things!

@EpicGamer007 thanks, after you read, please leave any suggestions :D

@elipie I suggest going over more advanced concepts and libraries but cool!

@EpicGamer007 hmm librarys yeah... I should add that, I was going to add librays and hashing but I still am confused on some parts when I have been developing in ruby for like 10 months

@EpicGamer007 tbh I think programming is nothing but confusing

@RayhanADev i give credit ;) at cool fax part

great tutorial. very useful as well. just completed the whole thing. you should make a continuation! I know you haven't got many upvotes but to be honest it would help many people

@ThisUserTaken ok! I wills start working on some things, any suggestions?

@elipie maybe, a tutorial on a project, like in the python books? just a overview of all the things in ruby.

what about arrays?
and are there any imports you can use (like math, time, or random in python)

@Bookie0 yeah, I am working on all those, I just have school right now this is kinda the pre second draft

@Bookie0 Ok I will work on a revamp real quick

Hmmm what about putting strings and variables together Eli?
Great question!
You would simply put puts with parenthese! Then, put your variable name with a plus!

The parentheses part is irrelevant. This works just fine:

@fuzzyastrocat hmm yeah, I just like putting parenthese, but I will fix that, thanks for the suggestion!

@firefish , can we do like, a series on all the languages that start with r that are on repl.it.Cause i heard u wanted to do a tutorial on rust.

@elipie PRoblem: I don't know Raku, or normal perl, for that matter 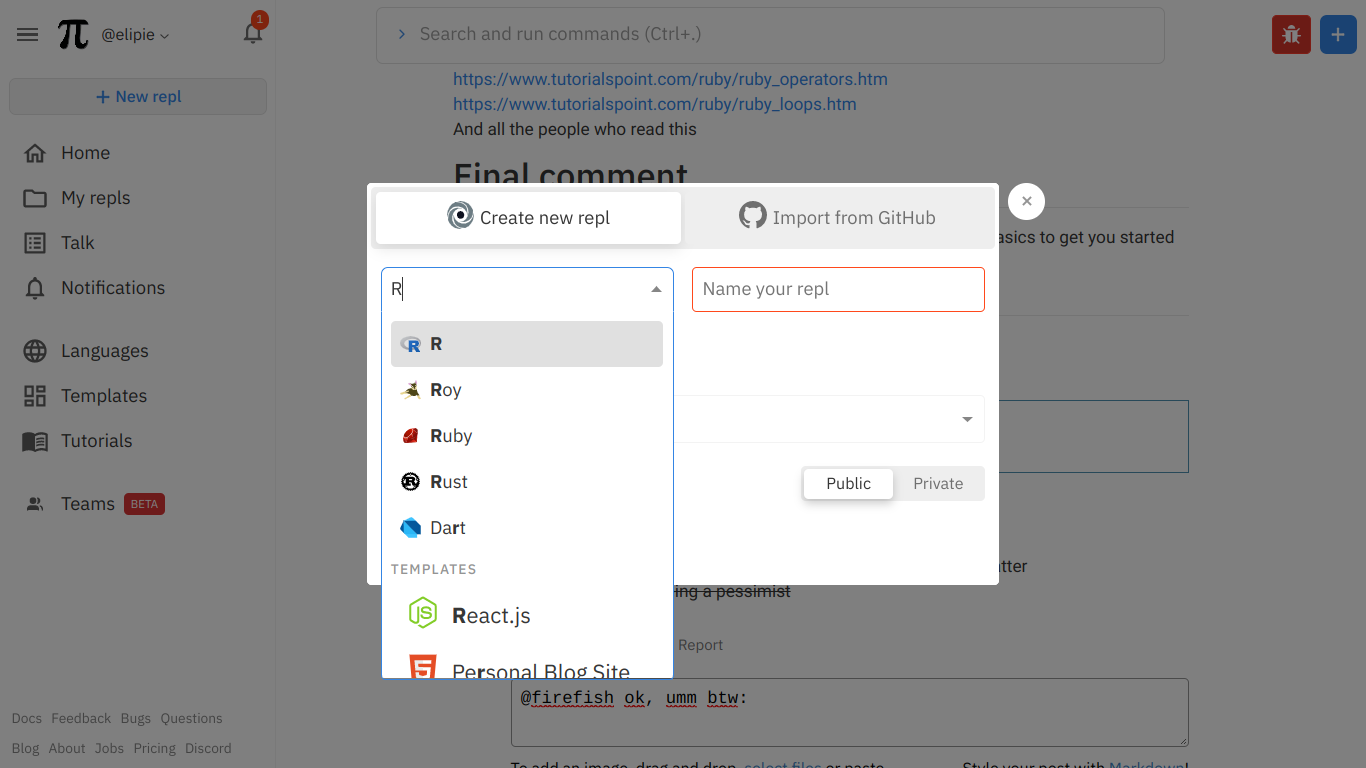 @elipie Me and @Fuzzyastrocat could do the Rust tutorial, I don't know about @jakman, but his account has been dormant for about a month

@firefish I'd rather do a Haskell tutorial (or maybe Elixir or Nim), but I wouldn't be opposed to Rust.

@firefish Well that's ok, I just meant in general so I'll probably do one of those by myself, but if/when I have time I wouldn't be opposed to a Rust tutorial.

@fuzzyastrocat yeah, we are just doing a bunch of R tutorials, wait I have an idea. @firefish and @fuzzastrocat I am going to post this on ask, as like a 'jam' or 'series' And then people would just come right on in, and then after that we could do a different letter, and another letter, etc;

@elipie Ooh, you should do a tutorial for R lang next! EDIT: Oh wait, you already thought of that

And yeah, that' be cool.

@firefish Also I know Perl, I don't know what Raku changes though

@fuzzyastrocat I heard Raku was better than Parrot...

@fuzzyastrocat I'm-a just give my crates a good ol' rub

@firefish Lol (intended for the last comment, but actually applicable to both I guess)

@fuzzyastrocat we just need to know everything until about like Loops

@fuzzyastrocat @firefish go here cause that explains it better

@firefish I have been awaken from my slumber.

@Jakman the problem: there aren't many others

@firefish I'm all you need man. I program religiously. Also if you really need more help then hit up sugarfi that guy may hate my antics but he knows some programming.