First of all, I recommend you all that you first go through the basics of JavaScript and Node.js from anywhere you'd like to though I personally recommend https://www.w3schools.com/ . Also, you should know how to create discord apps at https://discordapp.com/developers/applications/me and should've already invited the bot to your test server, this is only a tutorial for the commando framework, not the whole bot thing.

Next, let's get started

That's all you need to know to get started, put your imagination to the test and make amazing bots. Here's the link to the official docs for more reference: https://discord.js.org/#/docs/commando/master/general/welcome
Also here's a link to a Commando bot by @kpostal10 named Bug Bot just for reference: https://repl.it/@kpostal10/BugBot

Can someone help me with "Messing with the defaults", actually am noob at js and from where can I get that node_modules inside my bot's directory? Isn't it about repl.it, so accord to that I cannot find this thing inside repl.it. 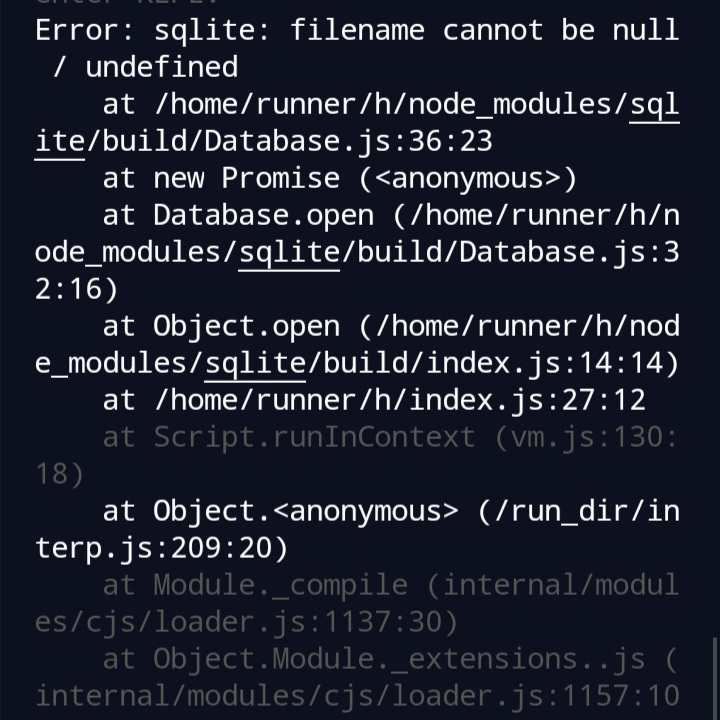 @Newt10 i have this issue as well

how do i use the npm init command? if you run it in the terminal i keep getting an error.

@Nanowrimoijk if you're using repl.it, you don't, use the package manager tab to install the listed packages.

@TheDrone7 so is there a list somewhere? or do i need to just run the require variables?

@Nanowrimoijk you can refer to the npm install command for reference. Each library is listed in the command separated by a space, search for each of those libraries in the package manager and install them.

@Nanowrimoijk yes as you can see, the libraries needed are

@TheDrone7 is there anything special to get the 'help' command to work on repl.it? its not working for me

@Nanowrimoijk no there is nothing special to it. It still works for me so your code night be bugged, go through it again and you'll eventually find out

Command class names like fooCommand and sayCommand should be in pascal case since they are classes. There are also several other bugs in your code, I fixed them in this GitHub gist.

Additionally, you should never edit anything in node_modules since updating dependencies will overwrite anything in there. To modify the default commands, just don't register them. Instead, you can register your own if you'd like.

For other things that can't be solved by extending classes from Commando you can make a fork of the GitHub repository and use that in your bot.

@pizzafox As for the Command Classes, I prefer keeping them that way. Also this tutorial is completely bug free, and all the difference I see in your gist and this is use of regular expressions, and its not really a good idea to use regular expressions in a tutorial as most people don't understand them. If you really found an actual bug, let me know.
Additionally, you can edit something in the node_modules, it's not a big deal ( unless you're using heroku ), also, going through the files in the module source, people might learn new ways of doing many things. Appreciate the info though.

@pizzafox As for the class name being captiol, it does not matter all you are doing is exporting the class object. Weather or not it is captiol will not affect the function of the bot. For how long I've been doing JS bots this is one of the better tutorials I've seen; Espically for commando. Also just because it is not regex does not mean it will not work the same. I like the fact that he showed that it can be more than one line in the validate function because a novice might do more custom validation in that check.

As for the other "bugs" you fixed I would like to know which ones they are? Because I pasted his code in a bot and it ran just fine as it is.

And for editing the node_modules that complitly fine. I've done it for my bot to add a header to the built in help method saying that this bot was coded in commando and who made it.

@kpostal10 For starters, the bot doesn't check if it can delete the command message. Also, it should return the response message.

Knowing you can make the validation function more than one line is basic JavaScript.

If you ever run your bot on another host or Commando has an update to the help command, your changes will be lost. I strongly suggest you move it to a separate command like I did in my bot

@pizzafox first of all, it does check if it can delete the command message, instead of doing lazy things like https://gist.github.com/pizzafox/ad192e8519c69f63565980e446a13ecc, you should try doing a little hard work, returning the response message is optional, if not shown properly like in your gist, people might not even understand if it's a function, and as I said, this is not an absolute beginner tutorial, but it's still a tutorial, doing things like what you did with your bot might still be confusing moreover the bot you linked does exactly same as the built-in help command. This tutorial is not for pros, it's for everyone who knows the basics.
You might wanna give it a thought about what you say and maybe do the honor of reading the whole thing.

@TheDrone7 The client permissions weren't there when I copied your command to make my edits. It seems you tried to add it in after I posted my comment. Make sure you change it from client_permissions to clientPermissions.

The help command I posted actually has a few new features, which you can see in the run function.

As an experienced Commando user, I'm just trying to improve this tutorial to help out newcomers. I apologise if my tone seemed critical.

@pizzafox Nothing wrong with being critical about a post, there is just a right and wrong way to appraoch it. Dont want to come off sounding like a "know-it-all" but you also want to make it to where what you are saying makes sense and is contributing (not taking away from) the post.
Thanks for providing another perspective to the bot.
Also @TheDrone7 might want to check the docs:
https://discord.js.org/#/docs/commando/master/class/Command?scrollTo=clientPermissions
It is clientPermissions

This is a really nice list of all the things you can put when you make a command in the constructor: https://discord.js.org/#/docs/commando/master/typedef/CommandInfo

@pizzafox IDK but for some reason client_permissions was working fine for me locally. Also, it was there from the start, I never changed it. And, I also apologise for trying to judge you. 😅
Again, regex is something that might badly confuse the "newcomers".

Looks good, warning to anyone that follows this tutorial on repl.it, using sqlite as the settings provider might break or become corrupt.

@kpostal10 thanks for the warning. @basicer is working on a new database system that's going to be 🔥

@kpostal10 i cannot mess with with defaults on repl.it, so is there another way for the same?

@pro0grammer Since node modules are not displayed in the repl I do not know of a way to change the default behavior of commands other than disabling them and re writing the command. There might be more information on defaults on the Discord.js.org docs for defaults linked here