How to make a simple Electron app!

Today, I will show you how to make a simple desktop app but using web technologies with Electron framework! :)

Electron (full name is Electron.js) is one of the famous web app framework. It was developed by GitHub. Electron using Nodejs runtime and Chromium browser to run your apps.

Before we create project, we need to install Nodejs and it's package manager, npm to install and run Electron.

If you are using a rolling-release Linux distro like Manjaro (which I am using) or Arch, you need to update your system first:

You can check the Nodejs installation guide for more infomation.

After install Nodejs and npm, make sure to check if they has installed by check their version:

If you has installed Nodejs and npm, let's setup our project.

First, of course, you need to create a folder called My App contains your project, you can rename it with the name you like.

Here is how it's looks: 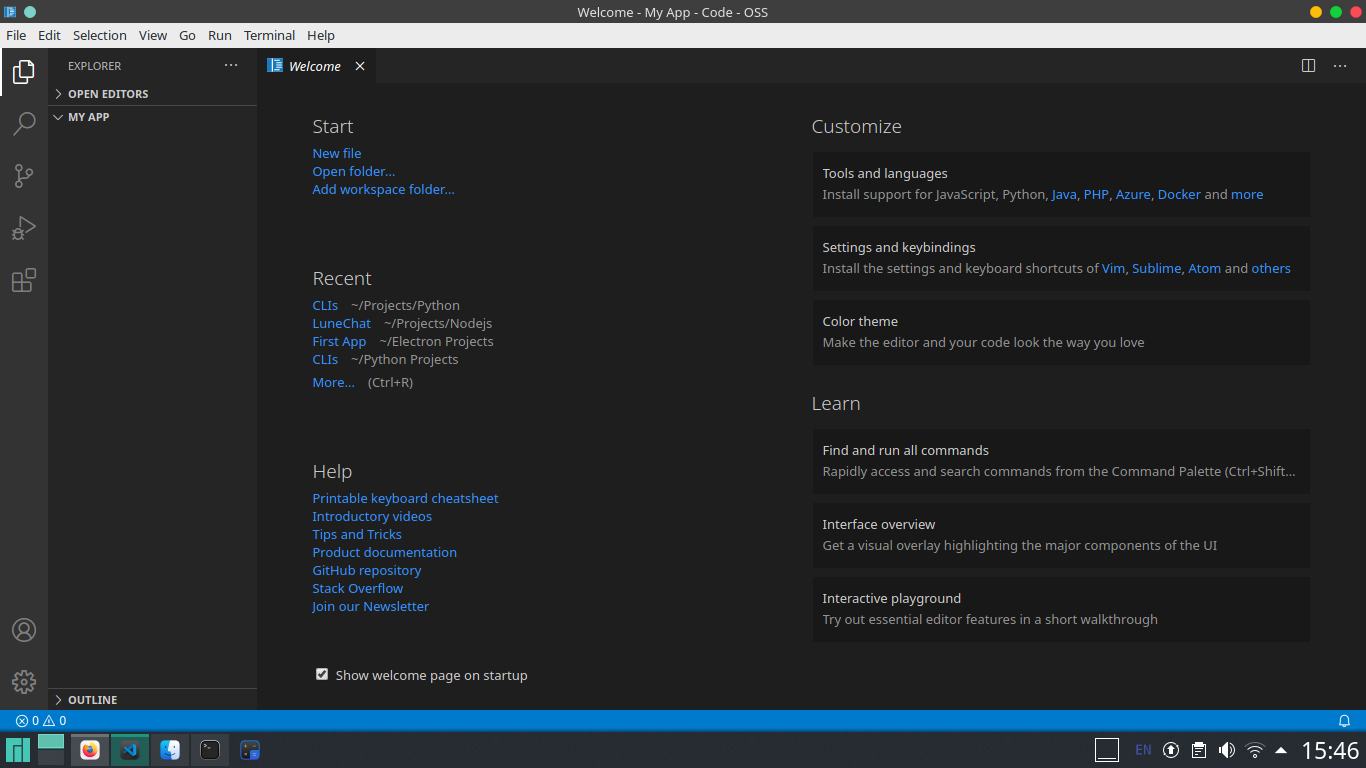 Now, open the terminal, go to the path of your project, and type the following:

This will setup our project, when you done, it will storage all information in a JSON file called package.json

You can type the following if you don't want spend time at edit the project infomation:

Replace the test data in scripts with this:

We will use npm start to run our app.

We are almost finish setup our project, the final thing we need to do is to install Electron.

Install it with this:

This will install Electron as a development dependency, means that you can run multiple apps with different Electron version without having trouble.

Finally, we have setup our Electron project, let's make our app!

Type the following will create a simple window:

Create the file index.html, which is the webpage we want to show and enter the following: 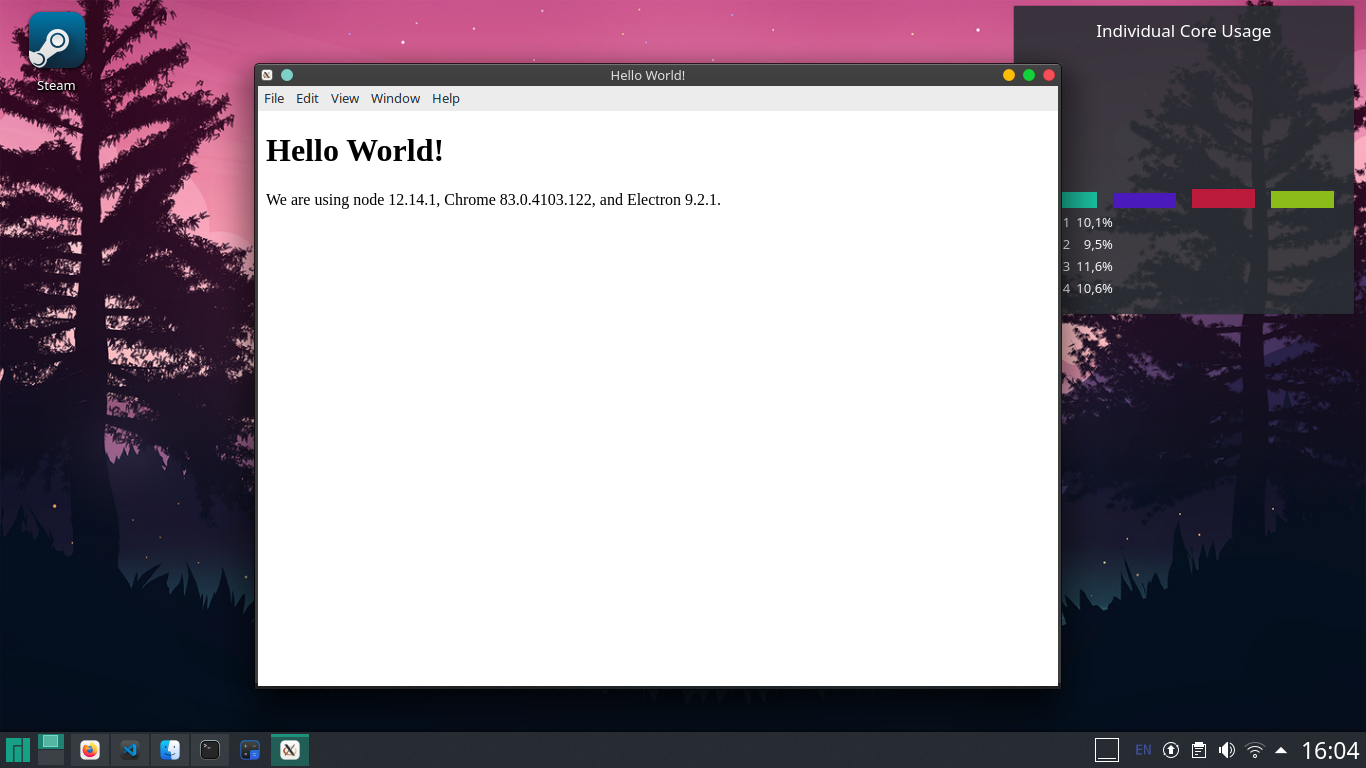 If you see that, congratulations! You have just make a Electron app.

The end of this tutorial

Check out the Electron docs if you want to know more.

100% certified broken
(on replit at least)

@RahulChoubey1 It is broken because this thing is 10 months ago. If you mean by running it on Repl, then this tutorial is not designed for it.

a text editor that is looks very similar to VS Code.

It's called VSCodium, VSCode without all of the propietary things

It doesn't work! Probably because Im using Chrome OS. I will upgrade to Windows 10 soon tho

PLEASE USE SEMI-COLONS WHAT IS WRONG WITH YOU

Big oof, I forgot that. I just paste the code from the offical doc so I dont see that, that was bruh.

But semicolon is not required, but recommended. Am I right?

Yes, but the semicolons are good practice to use, you know

Because if you come across a language that does require them (C#, Java, Rust, C, C++, you name it) You are going to literally miss them half of the time.
In some languages like Golang, that are the same as JS, in that you can use semi-colons, but in this case it's preferred not to because the code formatter strips them off.
But in JS, USE SEMI-COLONS, because they will help you immensely learn other languages

@firefish well yes but actually no.

@CodeLongAndPros Yes. Not in js though, you get thigs like

In which JS (which is broken) thinks that you are calling the output of bar(), with a callback, then calling that.
so basically, JS reconstructs the above to be the following:

which is unintended. So USE SEMICOLONS

@firefish Yes. But a python programmer met not know that.

@CodeLongAndPros Well python isn't susceptible to this AWFUL BUG THAT MOZILLA SHOULD FIX, so I do not blame them.
But just be wary of this, JS coders.

@firefish Because python parses by newlines

@CodeLongAndPros In JS the distinction between a feature and a bug is microscopic. 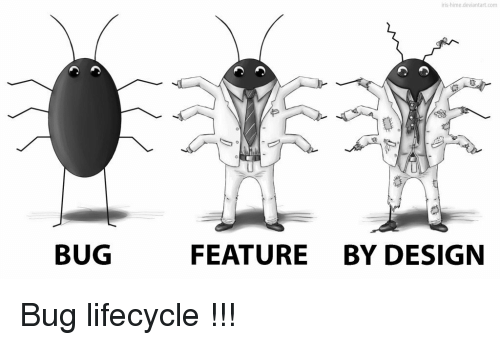 Electron sucks. I have like 5 browsers on my computer even though I only installed firefox-developer-edition

@EpicGamer007 VSCode is an electron app 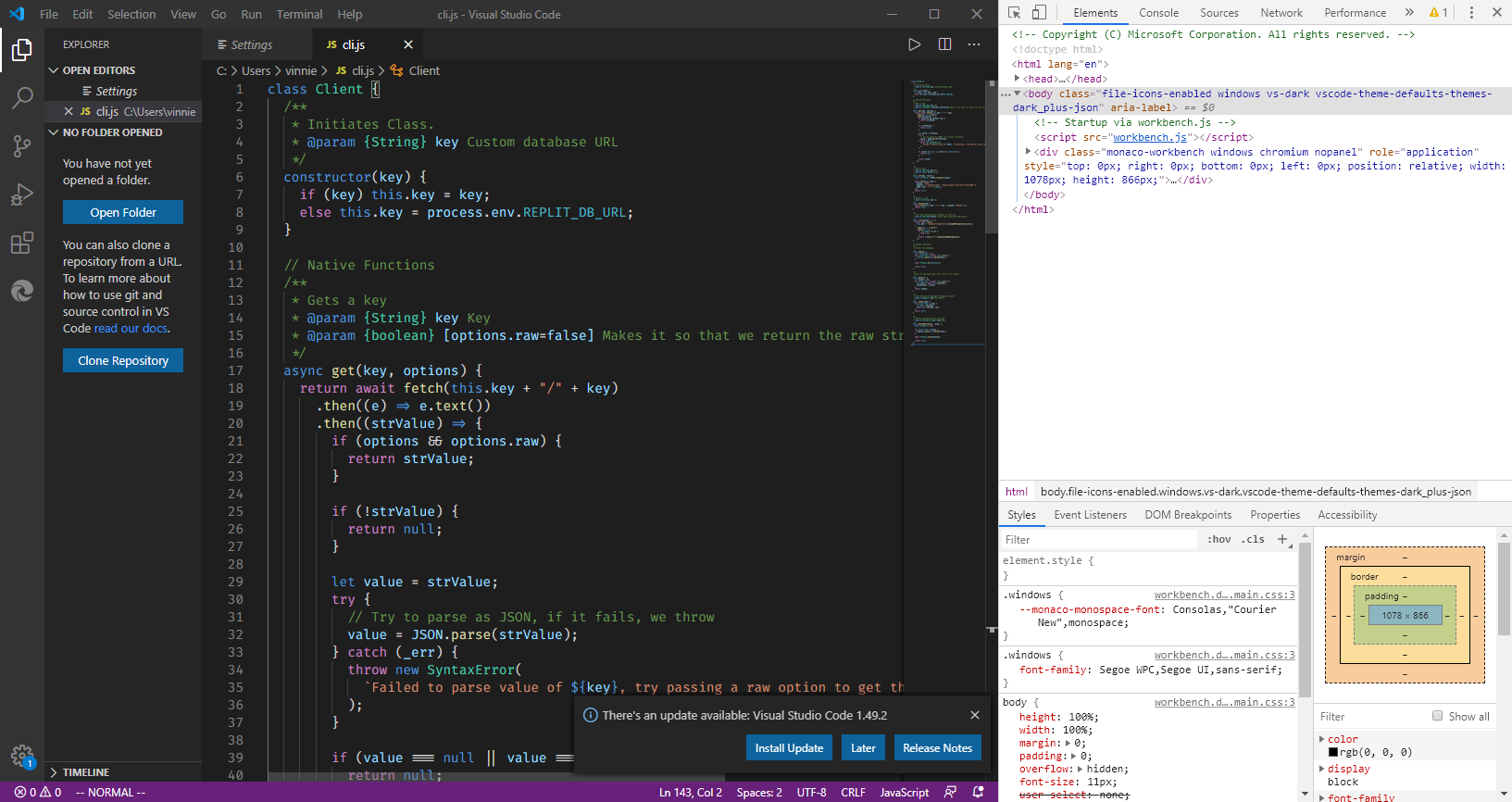 @EpicGamer007 AHHH no I told @CodeLongAndPros this on the wrong comment

@CodeLongAndPros just me being silly again