Data Scientist has become one of the most in-demand and exciting job of the 21st Century. And surprisingly, Python is also considered the best programming language for machine learning.

So, what point am I making here?

While dealing with AI and Machine Learning, we need to handle huge amounts of data. By providing data to the computer, it can find patterns in the data and use it to help us. Everything from YouTube to Facebook uses Machine Learning to display ads and video recommendations. For this reason, today I am going to be showing you a few ways to handle data.

Let's say we have 1000 names of people who have visited our website in the past week(you can find the names linked here). Now, with the 1000 names, we need to make them into a list so that we can find patterns in them, for example, who visited our website the most, or maybe we want to pick a random user and gift him premium membership for a year.

Now putting every single name into a list would waste our time and effort. There are many ways we can do it in our main.py file. For example, one way to do so would be to import the re module and do this:

But this will mess up our code real bad.

Sometimes we need to store complex data in a file rather than just strings. For that, we use CSV(comma-separated values) files. Here is an example of what a CSV File looks like:

The first line in the file refers to the column beneath it. For example, all the data that is in the first column is the names of companies. The second last(column) refers to the founding dates of those companies. So how do we work with CSV Files using Python?

In this tutorial, I have shown how to manage data from CSV and .txt files. You can pretty much do anything when you know how to sort them out. Here is a very popular CSV File about Video Game Sales.

This took me a long time to make so I would love and appreciate an upvote.

This is very interesting @OldWizard209 . I am learning Pyhton from w3schools and coursera an practicing on PyCharm. Can I fork this repl and work on it. And please can you provide me with some links from where I can learn more on this??? Thanks

Sure, fork it or you can just copy paste the code on PyCharms??
There are many tutorials online:
On YouTube there is
a full Python course. Go to the machine learning section and the person exaplins with great deal about ML. @IronStarkMan
There are some free MIT courses about Machine Learning as well. Search it up.... Ping me if you need more places where u can learn....

And good you cited your sources lol I haven't seen that much! :D 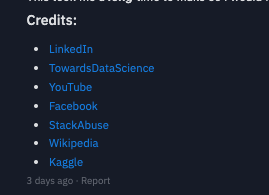 Fixed the error. I cited the sources just to make my post look better LMAO @Bookie0

@OldWizard209 lol it's always good to have sources (to make the post good or not ;)