Ok, so assuming you've already read Part 1 of my Tutorial Series, let's get straight into the good stuff!
Discord Rewrite Branch uses the async/await method, for those of you who don't know, you will understand it later.

By the way, I'm using repl.it so I won't explain how to install Discord on your computer.

Firstly, let's import the discord modules into python. We will be importing 2 modules, which is enough to last you till quite an advanced level. The 2 modules are namely:
discord
commands from discord.ext
To import, copy and paste this:

I previously used the token to string method which is unsafe.
We will be using Secrets that Replit has integrated into all repls.
Set the key name to bot_token and the value to the copied string. (Should be a string of random characters) 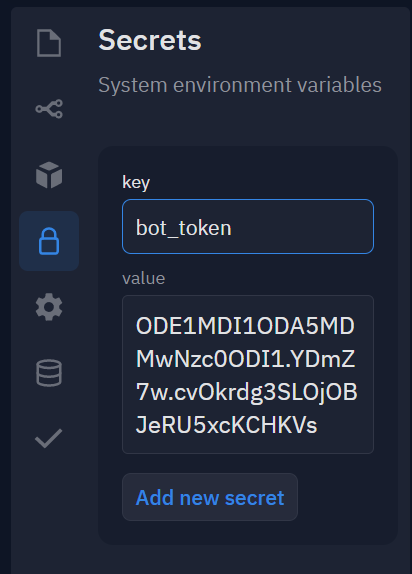 Most of the code will heavily rely on this. To define your bot, we will be using the Bot function from the commands module. It will take in one main parameter which is the bot prefix. A bot prefix is a character you have to type before the actual command for it to work, for example:

As shown in the picture, the bot only responded when I had the | symbol.
To code this, copy and paste this:
client = commands.Bot(command_prefix = "|")

Do note that you can change the prefix to anything you like, as long as there are no spaces

Your bot is almost about to go online, the last step is to get the bot to print out a message when it successfully goes online and to also add an activity it's doing like this...

This is called an event, an Discord has a built-in function just for what we want to do.
The code below will explain what each step does:

Lastly, Don't Forget to at the run command to get your bot online and working
client.run(token)
Now if you hit the run button, it should start installing the relevant lock files.
Once you see it says "Moderation Bot Online and Running" you know you have successfully made a bot.
But what is a bot without a command? Let's make 1 Simple command to show the ping of the user. The ping is the latency between the transmission of data between the server and the user. It is usually measured in milliseconds(ms) but Discord measures it in seconds(s) - weird.
Here's the code:

Oh my, it surely has been a long Tutorial hope you enjoyed it, stay tuned for the next one:)
If you encountered any problems along the way, feel free to voice it out in the comments section below.

1 year ago
You are viewing a single comment. View All
HarshVardhan19 (18)

@FishballNooodle and no, i didnt mean .Env, I meant .env
there is a difference.
once again im sorry, i didnt want you to feel offended in any way.