Elixir is probably the most beautiful programming language I've come across!

It's a pure functional language. This means:

In Part 1, we cover some basics on data types and syntax in Elixir.

Note: If you're new to Replit, try out the first 5 lessons in Part 1 here. You can go through them really fast.

In the console window you'll find "Erlang/OTP 23.0" written.
Erlang is a programming language created by Ericsson. Elixir has been created on top of Erlang.
"OTP" refers to "Open Telecom Platform", a set of libraries that ships with Erlang and allows developers to build quickly scalable applications.

You will see the following appear in your console

'iex' or interactive elixir allows you to perform operations, call on functions, set variables, determine if a statement is true and do several other things right in the console. Without having to write any scripts!

In this tutorial, we will exclusively work in iex to introduce you to elixir functions and operations.

Type h() to get an overview of what you can do in the iex console. 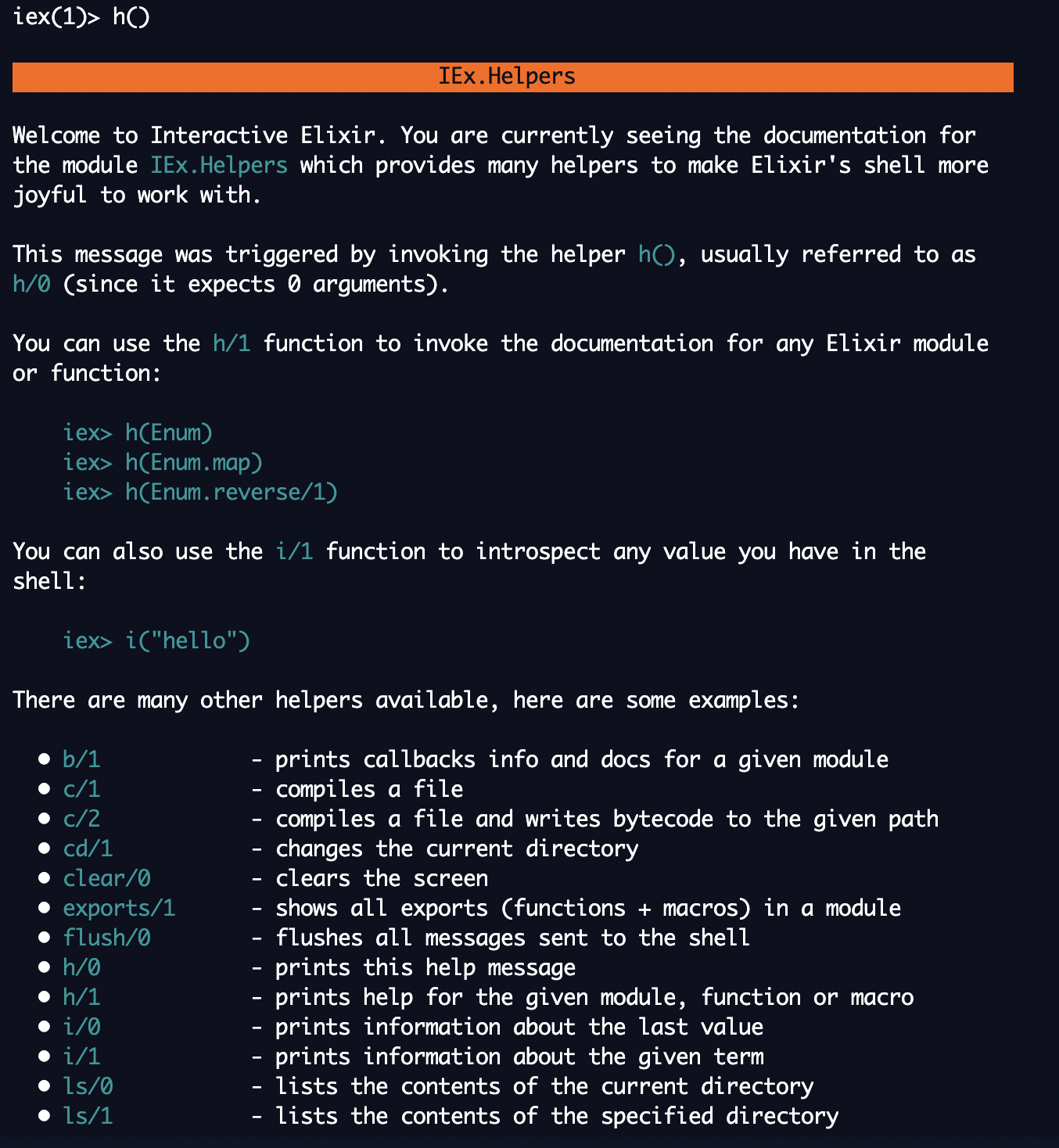 Two commands - i and h - are extremely helpful while working in iex.

Type i 5 and see what you get.

h refers to the 'help' command. Type h round in your console. 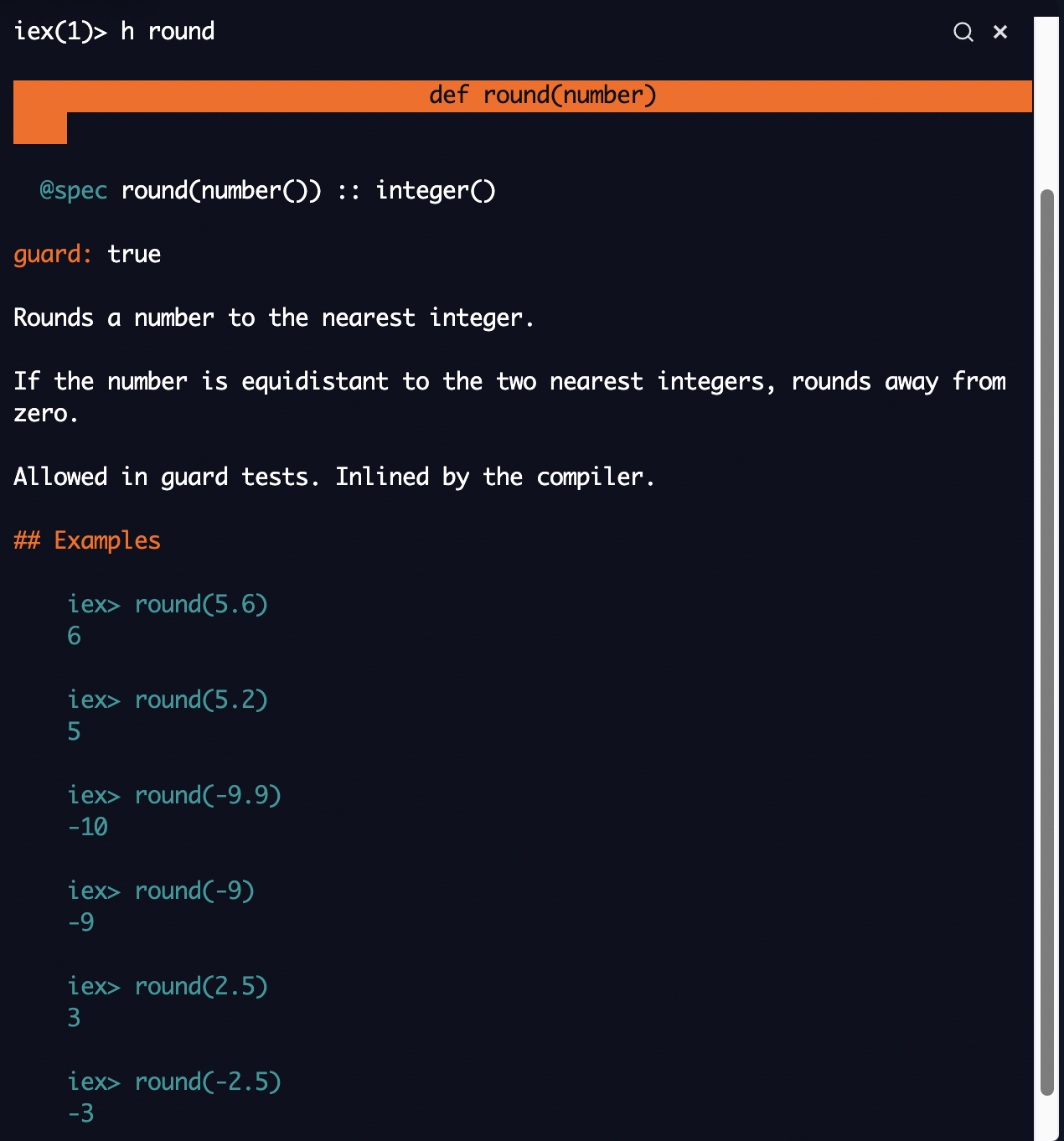 You get an error!

i allows you to get information on an anonymous function (covered later) or variable of any data type. The command h will return information only about named functions (including operators such as + ) and modules. 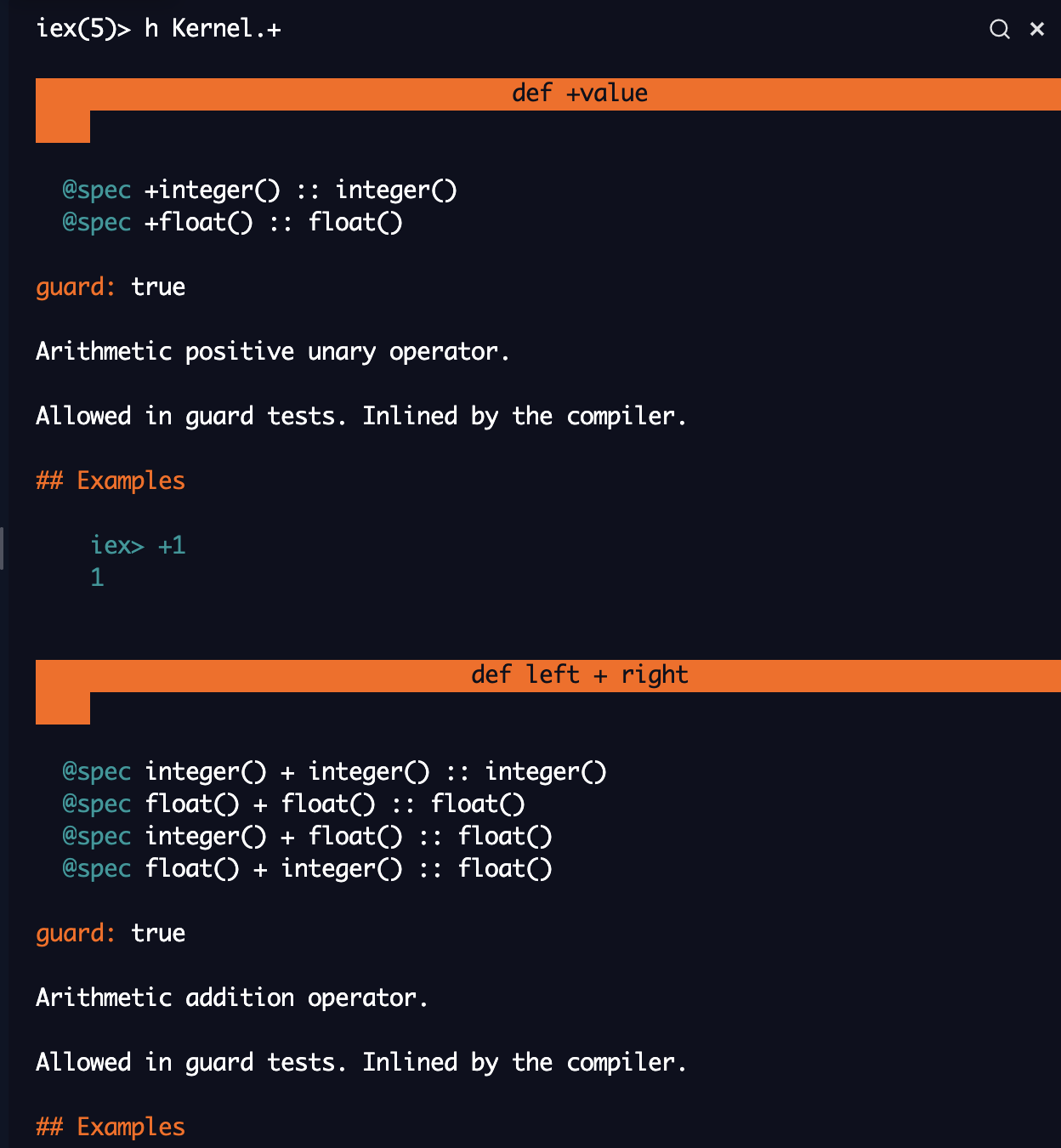 The 'Kernel' module is elixir's default environment which defines basic math operators, data type handling and other basic process. The Kernel module is imported by default in 'iex' and you can use the h command to know about functions defined in Kernel. (Note: the 'K' in 'Kernel' must be uppercase.) 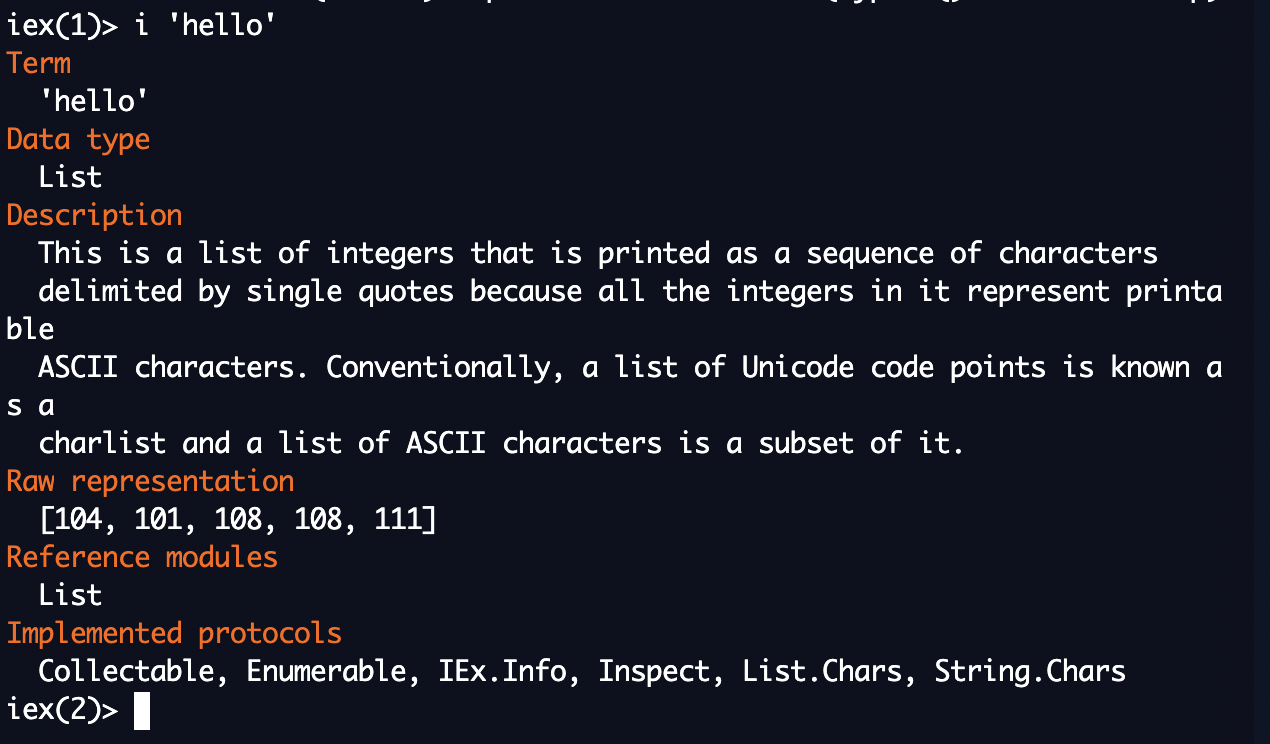 Let's get started with some quick operations.
In your console (you should see iex(1) here) try out the following: 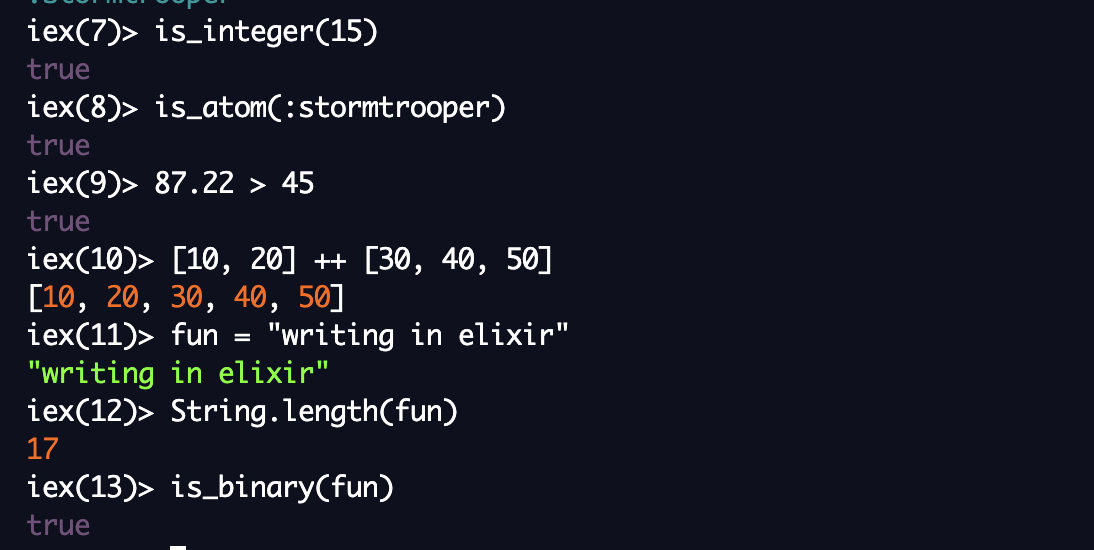 In your interactive elixir console, try out the following: 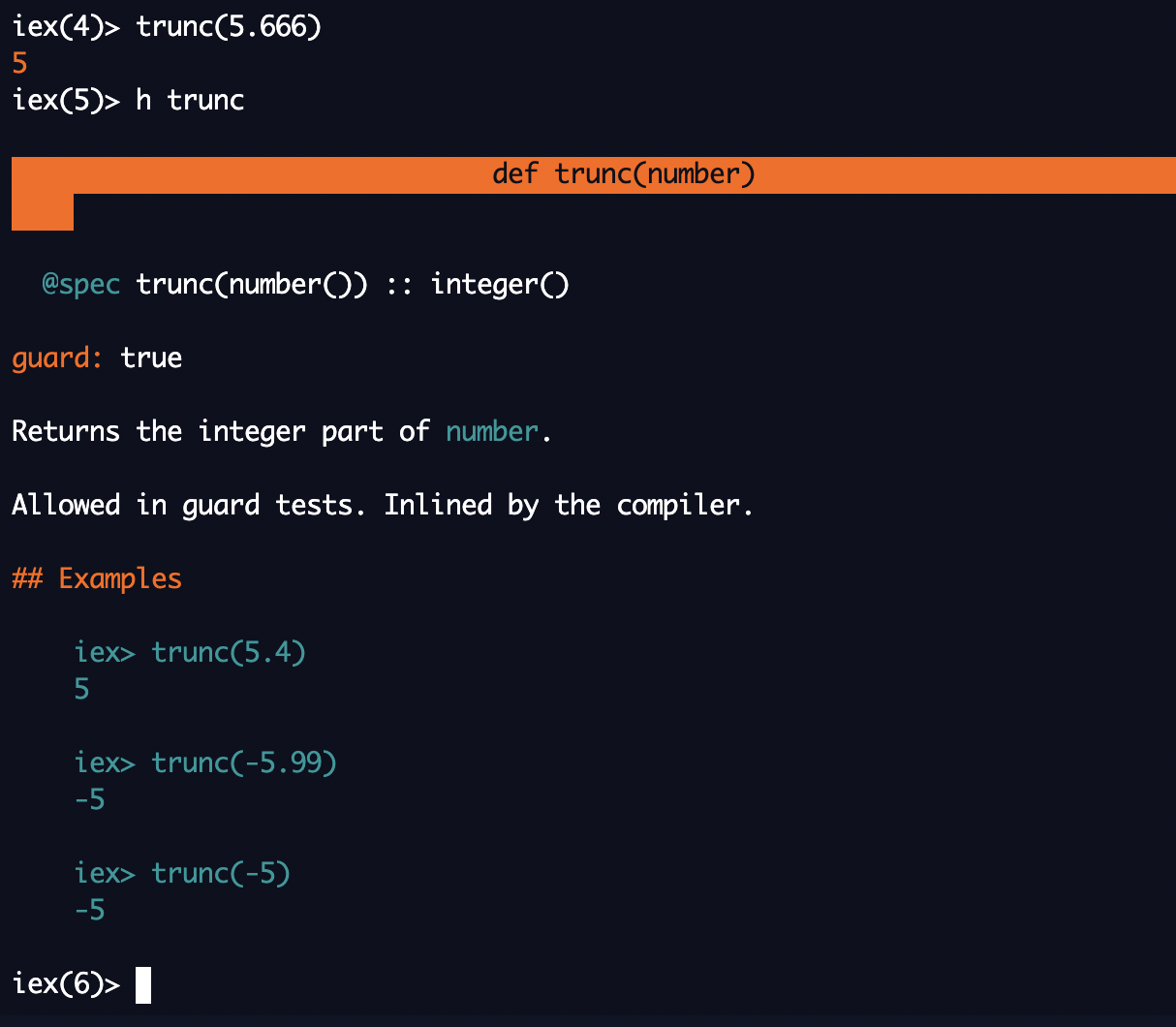 'trunc' is a built-in function in elixir that takes a number as input and returns the integer part of the number as output.

You were able to define another function called trunc, that takes a number as input and adds itself to it twice i.e. returns 3 times itself.

What distinguishes named and anonymous functions?

How does elixir know which function (when there are two of the same name) to execute?

Here are some quick questions:
(try all of these in your iex console. You will need to do the questions in order.)

Solutions will be revealed in the Part 2 Tutorial.

Part 2 coming up early next week.

This is an amazing tutorial! You don't see a lot of Elixir being used around here, so it's nice when it pops up :)

thank you, @DynamicSquid
LMK if you have any specific ideas on what I should cover.