Hey. So today we will work on assembly language.

An example of this would be to write out 5 in binary you would write 0101 but in assembly it’s just 5.

It is very dependent on an understanding of computer science, but I will hold your hand throughout all that.

Anyway sit back, relax, and get ready to learn.

To start off we will learn a bit about the CPU.

At its core the cpu consists of some basic parts.

Every clock cycle the CPU gets an instruction from RAM and executes it.

Memory or registers is just a place that holds data.

This data is in the form of binary.

Anyway let’s get our programming environment set up.

To program you can use this or a real assembler.

A good real assembler is NASM and it’s my assembler of choice.

Today we will be using x86 32-bit NASM running either in the website or on your computer.

To install NASM go here and install the latest version for your operating system.

Unless you are on Linux look up the corresponding NASM tutorial for your OS.

But here’s is a quick tutorial for Linux.

Type this into your terminal to compile:

Replace the *s with your file name.

Then type this to link:

Replace the *s with your file name.

Then type this to run in your current directory:

Replace the * with your file name.

Anyway we can finally start coding!

Then type this in either your text file or the website:

If you run it you get nothing as output.

Well let’s break down the program.

The global declaration at the top is declaring the entry point for our program.

The _start: is a label, used to split up our code.

The mov is a keyword used to tell the computer that we want to move a value into a register.

The eax is a general purpose register.

So in turn the syntax for mov is:

For just a second let’s talk about Cpu registers.

Take a look at the figure below: 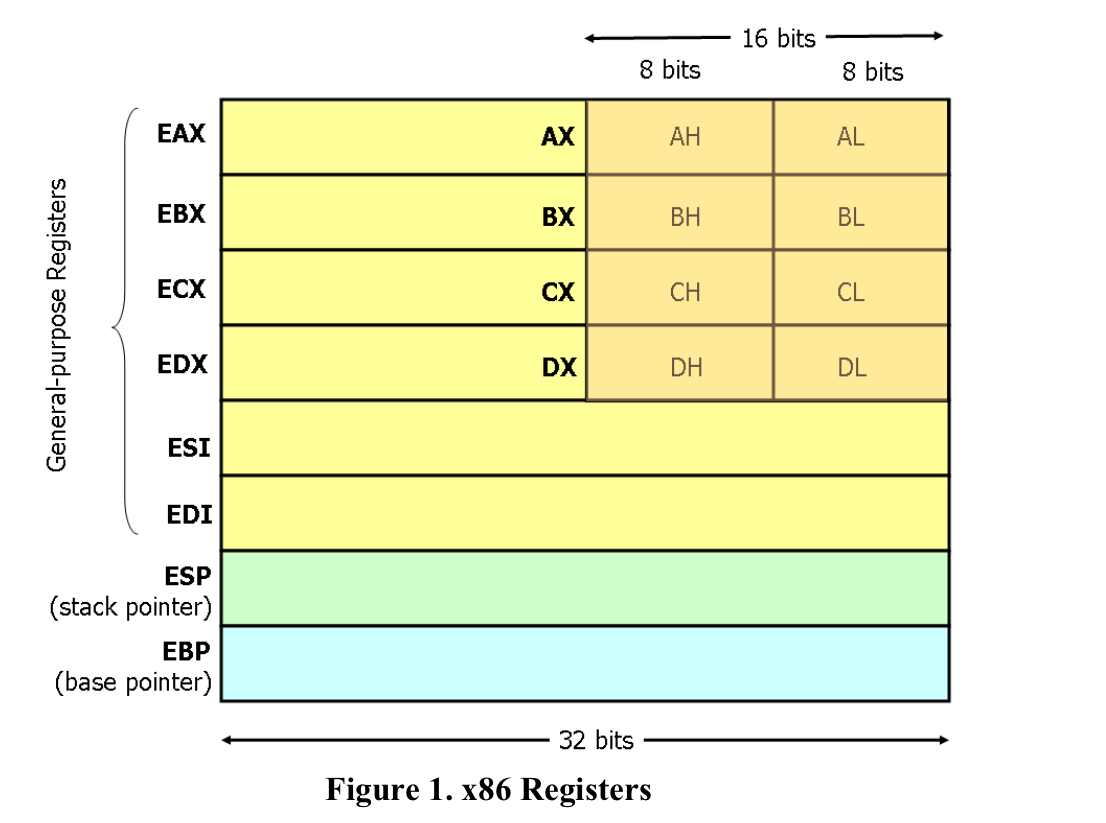 It is a cut-down cpu memory map.

I don’t expect you to even grasp most of this yet but what I do want you to understand is that we will be using 4 general purpose registers quite often.

Anyway back to the code!

The mov command is very useful.

And it can be used in conjunction with other commands to produce great things.

And this brings us to our next section.

Type out this code in either a new file or clear out the code you wrote on the website and write this.

The int tells the compiler that we want to perform a system interrupt (not create a variable).

The 0x80 is a hexadecimal code for a basic interruption.

Values starting with 0x are hexadecimal.

Why are we moving values into eax and ebx?

The value in eax is the code for the type of interruption we want to perform. This is not the case for different interruption codes.

It just so happens that this 1 is the code to exit the program.

This interrupt is dependent on ebx because that is the exit code. 0 is the exit code that everything ran fine. This doesn’t effect the program at all but it can be used for debugging.

Anyway that is it for the most basic of interrupts.

Section 3: the text and data sections.

An assembly program has 3 sections and one of them is the data section.

Take a look at this program.

The code we have written so far can go in the text section or where our code goes.

The definition of constant pointers go in the data section.

A constant is a value that can not change.

A pointer is a beta-variable. It points to an address in memory.

What is the db?

There is many more sizes. But we will worry about those later.

msg is the name of the pointer.

And 0x0a is a hexadecimal code used to represent a newline character or ‘\n’.

Anyway that is it for part 1 of the crash course upvote and give feedback.

@Wuru found and upvoted before you even pinged ;)

@Highwayman haha. :D I have some loyal followers now eh?

@Wuru lol yes. I just enjoy this idk assembly is just the only other language that I find to be as interesting as C++... probably because it’s so low level XD

An example of this would be to write out 5 in binary you would write 0101, but in assembly, it’s just 5.

But isn't binary often stored in ASCII, by bytes? Thus 5 would be 5, not 4 separate bytes to represent that number? That would mean -1u128 would take up 128 bytes, and not fit all into 16 bytes or less?

@SixBeeps and also an upvote would be apreciated

@Wuru I'll read the rest once I get my Linux re-installed, but this tutorial has been more helpful than anything else I've read :)

why you made it.
this is cool.
btw i am making like assembly programming language.

fork it for try my programming language : Stekovaya

I will admit that it seems a bit sudden to learn interrupts in the very first tutorial, but I mean it works so idk if that's even helpful statment anyways that's my feedback thanks for making the series! :)

No problem! Thanks for the feedback :D @Highwayman

darn. I was gonna learn it and then teach it oh well.

I've always wanted to learn assembly, but it was to hard

This tutorial makes it easy. It will still be a challenge, but, you should have a much easier time. @ApoorvAgrawal