Which is better: Terraria vs. Minecraft??

Terraria for sure, there are loads more bosses and each are unique and the bosses are spread out not just endgame. The weapons are a thousand times more interesting with unique debuffs and attacks, cant wait till there is a rainbow gun in vanilla minecraft.

@sammybrown So... Like a brand-new Minecraft 'Terraria Mod' update, I guess?

@sammybrown I like Minecraft for its kind of medieval theme, instead of the crazy all-weapons-in-fantasy theme of Terraria. I'd hate to see guns added to Minecraft.

@DragonLord5646 But, why? Guns in Minecraft would be so awesome, but (maybe) hard to use. Just imagine guns from Terraria, add them to Minecraft, and BOOM! 100% Pure awesomeness!!

@sammybrown True... but the real question is... which one does more damage?

@CollinKunsman also debateable, i dont know the answer because i havent played a magic playthrough

I like Minecraft because it isn’t modern or sci-fi. It reminds me of the old pixel RPG games without guns or crazy things like that. There are already guns in mods for minecraft, if you want guns, get them there. @CollinKunsman

You could also use commands to enchant a sword or bow with Sharpness 100 or Punch 100, one shotting [email protected]

And if it’s hard to aim with a bow, get Power 100 so it goes straight. @sammybrown

@CollinKunsman magic does in endgame, but guns and bows are more accessible earlygame

@Murzikal What is endgame? Is that supposed to be an update or mod or something?

@CollinKunsman it is how far you are into the game. endgame is after moon lord

@Murzikal Kay... But, how does it help if there's no ending to the game, just like Minecraft! (even though they think there is, even though there are credits on Minecraft...)

@CollinKunsman endgame isn't the same as an ending. in terraria endgame equipment is crafted from the final boss. Terraria is asandbox game so you are allowed to build big fortresses and stuff after the 'ending'.

@sammybrown But, couldn't you just build fortresses even BEFORE the 'ending'? Cuz I certainly have dozens of times!

@CollinKunsman Okay, try to build a fortress out of ender stone without getting the "ending". You get what i mean, the entirety of the world is only accessable after the "ending".

@sammybrown There's no End Stone in Terraria. only in Minecraft.

@CollinKunsman or luminite in terraria, you get my point.

@sammybrown The max enchantment level of any enchantment is 32767. So if you want an op weapon, get a stick and enchant it to knockback 32767.

Tfw you don't give anything to go off of. Like Minecraft is better because of graphics, but it doesn't have the same game mechanics as Terraria

@HazTheWaz I had no clue you had a Replit account.

Minecraft, redstone in minecraft is kind of like coding. Though very different, redstone could be used like code. Also, in minecraft there is different modes like survival or creative. Although I have played minecraft more than Terraria I would still choose minecraft. Terraria is still a very good game.

@Pythonier In terraria 1.3.whatever, there are logic gates and advanced wiring mechanisms

@sammybrown Whoa! There's a Terraria 3?! How come I've never heard of that before?! THAT'S AWESOME!!!!

@CollinKunsman theres no actual terraria 3, its just an update, 1.3

@sammybrown Aw, man... But still, if there was though... Now THAT would've been AWESOME!

@CollinKunsman What do you think they added, any awesome suggestions open.

@CollinKunsman Minecraft is 3d. Therefore, it is better in my opinion.

Minecraft. It is 3-D and you have to craft items and terraria is only 2-D.

@bonnym512 You also craft in that game too!

@CollinKunsman but it is not 3d

I definitely prefer Minecraft, but simply because the building system is more in depth, and redstone is fun to play around with.

I prefer minecraft it's really quite simple compared to terraria yet you can make so many ingesting things weathers it's building gigantic super structures or building a computer with red stone it's all fun. Terraria good to but I don't like it as much I guess.

Minecraft because is is 3D and has a lots of mods to it.

tbh both are awesome. Both have complex wiring systems, both have adventures and dungeons, both have bosses. Although Minecraft has less items and enemies, it's 3D. Terraria is 2D. Honestly, I say they're at a stalemate.

@DragonLord5646 They're such different games, I honestly hate when people try to say one's better than the other or even ask to compare them. Minecraft is based around the open world sandboxy type with a major emphasis on building and stuff, while Terraria plays more like an adventure game with clear progression and emphasis on combat and looting.

Playing in three dimensions is more stimulating from a personal perspective, but Terraria's wide assortment of bosses and challenges makes it appealing. Overall, I would prefer Minecraft, not just because of the gameplay interface, but because of redstone, and related concepts.

imo terraria, tho both are really good

@ethanheys "Floss"? So, whatcha mean by that?

@Murzikal I don't like fortnite that much. there's just no point to it at all.

@CollinKunsman The floss isn't a Fortnite dance lol. It's in Fortnite, but didn't originate from it. I don't care for Fortnite either.

@Zavexeon Coincidence, am I right??

Minecraft, 1.14 came out just 3 days ago, and it's a good update! Also, Minecraft is 3D while Terraria is 2D. It's hard to make things in 2D, in 3D you have more space to work with.

@GameMaster1928 Okay... BUT it's a whole lot more difficult to be surprised or jumped by the enemies from behind you. So much more to expect than in Minecraft.

@CollinKunsman But the element of suprise is fun... even though i dont like jumpscares

ehh people on here are saying that minecraft is better because it is 3d but I dont think that just because it is 3d it is good. Basically its the same with things like the whole era where they invented 3d. Just because a game is 3d does not mean that it is better than a game that is 2d. I respect your opinion though. @GameMaster1928

@PAYTONWILES
If you want more content there are mods, and the fact that it's 3D gives it much more potential

Yeah but I think that all the content should be in the game at the beginning and you shouldnt need mods to have more content because of a lack of content. I only
count the vanilla game by itself and not mods and that is [email protected]

oof, hard question it really depends on your style i personally have 400+ hours on both but if you love building Minecraft is the way to go but Terraria is full of OP items and the developers hinted at a creative mode for Terraria, though is not confirmed, i personally like Minecraft better because of the command blocks and 3D aspect, i've tried doing several builds on Terraria and its a lot harder because there is no depth, so for now Minecraft gets the win.

It all comes down to this: Would you rather have a huge 3d castle that you can explore, or a tiny 2d castle that doesn't look cool at all?

@Vandesm14 Hmm... I guess that makes sense, but you can make either builds look cool either way, and it's mostly the help of building builds to make it match with the surroundings around it.

@Vandesm14 they can still look cool 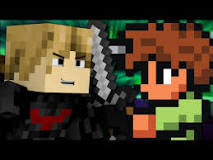 @CollinKunsman Nice picture, I am not an expert on either game, but I like the music of Minecraft better, and I just like the idea of minecraft with all of the possible biomes that can be generated. Also, minecraft is 3d Great question by the way.

I feel like it's not fair to compare these 2 games. They look kind of similar, but they are so much different. It all depends on what you prefer though. Do you like building huge things in 3d? Play Minecraft. Do you want to play an adventure game with many bosses? Play Terraria. It all depends on what you prefer to play, and what makes you happy. As for me, I might be a little biased as I've played Minecraft so much longer. I just like Minecraft a little more. I just really love being able to come home from school or work, get on my computer and build my house and adopt a dog. I also really do love Terraria though. I find more enjoyment playing with my friends in it than playing by myself.

@nanoboynm31 Yeah.. I guess so.. But, it's interesting to hear other people's opinions about both games to see who likes what game better and have their reason why it's a much better game, in their opinion. :/

@JanneHailio Uhhhh.. that has nothing to do with the post. ;-;

I've got a YouTube video that I've made about me playing Minecraft if you guys are interested. It might not have that good quality, but it's still a pretty good video!

have you played it yet? terraria is better (obviously)@UndertaleRulez

Well terraria has more bosses, more items, more progression, and you can dig down safely knowing there won't be lava below, and if there is, dig away.

@CycleWeeb Yep. So It's quite obvious of which game wins! Yet, I play both Minecraft AND Terraria. They're both on my Xbox 360.

So, I think its final. Terraria is the winner of this battle! Thanks you guys for your support and CODE ON!!! :D

I would say minecraft is better since it is more interactive and that fact that it has command block? Yes please!