Hi All!
Git support + the new integration with GitHub is in the process of rolling out!
When the feature is enabled for you, we'd love to hear how we could improve, and what additions you'd like to see.

from @mat1:
"is there a way to create a .gitignore file? I tried making one but nothing happens when I press enter."

We're working on supporting this soon!

from @Vandesm14:
"Is this live? I don't see the git sidebar. Is this an explorer-only feature?"

We're currently in the process of rolling the feature out to everyone. Some users have it enabled currently.

I wish the github repository can could be changed!

Is there a way to disconnect replit repl from github repl?
I delete the github repl (which replit is connected to) and replit keeps popping error. (I deleted my replit repl and moved the code into the new one.)

I would like the ability to change repos that the project is linked to.

Connect to GitHub button in version control tab does not work.

I deleted my repo on GitHub. Replit doesn't allow me to create a new repo or switch to another one. It still thinks the old repo exists.

I'd love to not be locked into github. glitch.com just gives you a git endpoint you can push/pull to/from, and that would be swell. Also allowing github alternatives like bitbucket etc would be fine too.

Can't pull my branch anymore if the remote version has an unrelated history. Button does nothing and have to use the shell.

Not showing any updates from the github repo. It says that it is up to date!

This is just awesome and better than vscode and git and any other version control system I have ever seen.

I would like if I could change my github repo after I already have setup another one before on it. I seem to not be able to find any way of doing this.

There seems to be an issue with this feature. I had switched from my master branch to a secondary branch and pushed some changes. The next day I returned and was ready to push changes, but the branch name was not populated in version control. I thought that since I was still on my secondary branch that I would just push.

It turned out that it pushed to master, but it didn't actually push the changes up to GitHub. I switched to the secondary branch and committed and pushed my changes. Once I merged the secondary branch into master on GitHub, and I tried to pull the master branch, nothing is happening. It just shows "24 commits behind master" and shows the pull button. The pull button seems to load something for a few seconds, and returns to this same image

Now the Replit git feature appears to be broken on this repository.

It'd be great if Repl could update their default branch name to main, to follow in line with current trends in inclusivity within tech; see updates done by GitHub, Oct 2020 (https://www.zdnet.com/article/github-to-replace-master-with-main-starting-next-month/)

Just as a heads up, I'm experiencing an issue with a homework repl I need to push to github. Every time I try to create a git repo I get a loading wheel and then it jumps back to the "create a git repo" page. Haven't run into this issue before, but for some reason my "Lab 10" repl is having this issue.

I don't want my login to repl.it tied to other services, but when I connected with github to upload a project, Repl.it logged me out & made me log in via github. I would like to be able to login with a username and password again!!

I granted rpl.it access to only a couple repositories, which were empty, expecting to be able to upload. But repl.it wants to create a new repository. I don't want to give it blanket powers. It would be great to be able to upload into a (perhaps existing empty branch for) an existing project.

GitHub integration is not working for me at all. I can commit changes but that only stay in my repl. When I click connect gitHub, it gives me option to create new repo and the funny thing is I don't find my GH account there. I can't create repo since it always comes back with an error asking to report the issue.

@abdadeel Edit, I found the solution ==> You need to provide full access to Repltit IDE from gitHub with all the permission to read and write to all the repos.

I force-pushed to a branch, it did not update in replit.

repl says its 3 commits ahead but theres no changed files. Can no longer push or pull from github 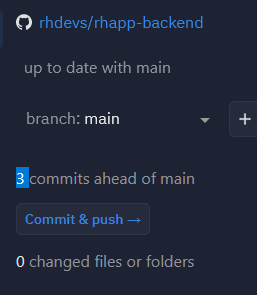 @RHDevs Following errors in console when attempted to commit & push

I want to be able to link to different repo, I love this feature in general, but it's infuriating when I can't link to a repo not created by replit