Today we are featuring someone you will never be able to guess! It's @piemadd (aka Piero aka Mr. Maddaleni aka P-air-oh aka P-arrow) - an epic dev and Repl.it's very own social media manager! Luckily, we were able to have an interview here, and below is how it went. 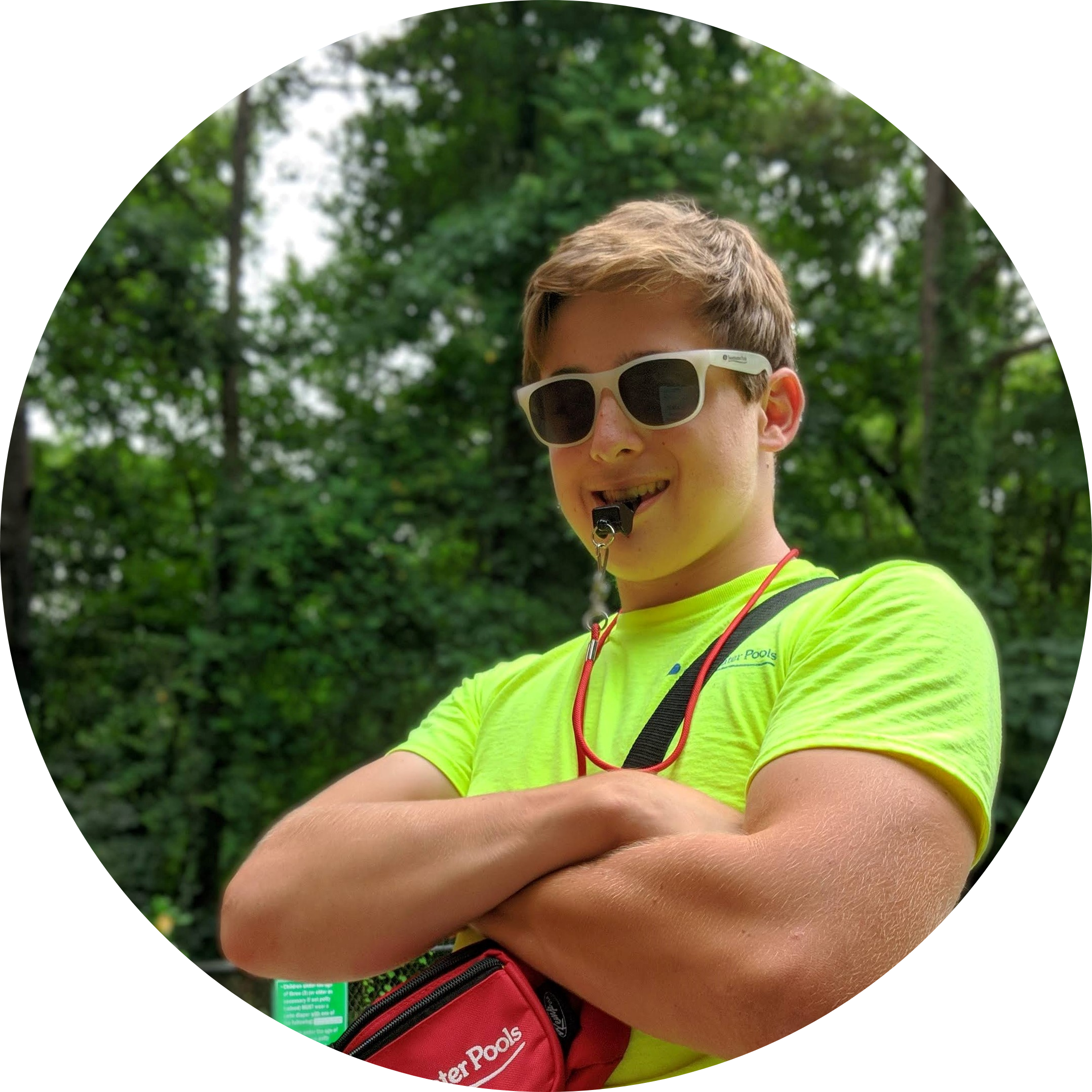 @TheDrone7 : Hello Mr. Piero, please introduce yourself to the community.

@TheDrone7 : When and what originally made you want to code? Why did you become a social media manager? How's that going for ya?

piemadd : For Christmas back in 2016 my mom got me a simple Arduino Kit since she wanted me to get more involved with engineering. I immediately dived into the basics of C++ (well, Arduino's modified version of it) and fell in love with programming micro controllers. To this day, I still collect them and do my best to push them to their limits. In 2018 I picked up python during my free time in my engineering class at school, usually by simply googling, "Python IDE Online" and Replit would be the first result. Since then, Python has been my primary programming language, but I also like dabbling in Node, Typescript, C, C++, Java, and some others. As far as social media goes, I actually emailed Amjad some time in June asking to be the (and I quote) "Social Media Manager and Official Pizza/Pasta Maker of Replit." Honestly, I never expected to get the job but I got an email back in late July and it just took off from there. At the moment, I do all of my programming on Replit, it just isn't worth the hassle in my opinion to have to setup and maintain dev environments on my local machine and then have to use weird tools to push them to an overpriced and under-powered VM on AWS or GCP. Social Media is going great, one great advantage of it is my ability to develop tools which aid me in my work, such as Replit.sh.

@TheDrone7 : That's pretty cool! And here's the next question: Was there a change in the way you code before and after you discovered repl.it?

@piemadd : There was definitely a change in how I coded after I discovered Replit. I would actually be hesitant before to make something because I would always have to spend 15 minutes just fiddling with libraries and the such. Now, if I want to get started on, lets say, a Flask API, I just have to make a Python repl and then select the template. Before I would have to spend a few minutes installing flask, finding an example, running it, and then having to switch over to chrome every time I made a change. The dev experience is so nice that I've been trying to do all of my work on there, including that which involves Arduinos. It's really early in development, but that's what my ArduinoTest repl is for, which should allow Arduino development to happen right in a repl.

@TheDrone7 : OOH POG! Anywho, what projects created by you would you say are your favorites? What was your inspiration behind them/How did you come up with their ideas?

@piemadd : Honestly my #1 favorite project will have to be Replit.sh - It's a URL shortener I created for social media posts. I'm proud of it since its the first project I made with Replit Auth and Replit DB.

@piemadd : My next favorite one has to be my DeepDream program - Google made an ML model a few years back which takes an image and makes it look trippy. It was a fun project and I still use it every once in a while for my personal enjoyment.

@piemadd : I also modified Water.css at some point to make my own personalized version, Piero.css - It holds many of the basic traits of Water.css but looks more "hackery" in my opinion. I used it on my own website for a while, but eventually made Piero.v2.css from scratch, which can be seen at my site.

@piemadd : Last, but certainly not least, in an attempt to learn about storing Images in Repls, here is a simple API I made which returns a random picture of @masfrost

@TheDrone7 : Very cool. I really liked the DeepDream thing (I created one of my own - was giga trippy so won't share it here) but moving on, how has your experience as a social media manager been?

@piemadd : Fun part about being the social media manager is that I meet new people every day, and everyone has a different story. You never know who you'll meet or how your conversations will go. So far, my favorite experience as the social media manager was one of the recent tweets I sent out, being a snippet of code which rendered a version of LOSS in the console when run: https://twitter.com/replit/status/1355363051445346305

@piemadd : I have a cool website (mentioned above) and I like making tech Tiktoks https://tiktok.com/@piemadd. I also like swimming, physics, biking, running, and I have a big dog named Nico.

And Nico with a big bone

@TheDrone7 : That's... cute lol. Here is the last question: what is your message to the readers of this post/repl.it community?

@piemadd : They key to life is staying safe and being happy! 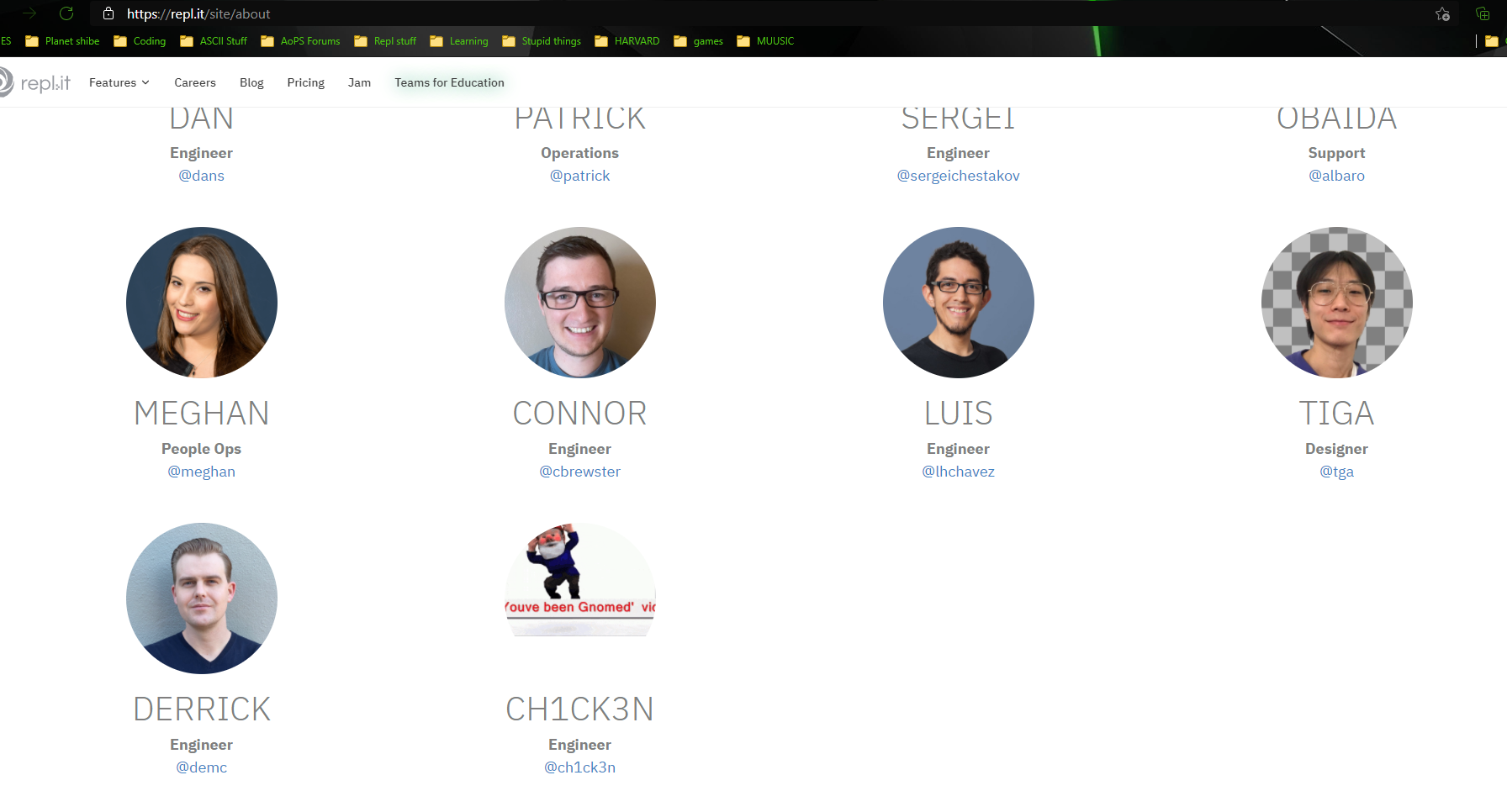 If I eat myself will I get twice as big or disappear completely?

@UnluckyFroggy
If you keep typing this will people get tired or angry?

I CAN'T SEE THE DOGO CAUSE IT IS A DISCORD PIC NOOOOOOOOOOOOOOOO . Also @piemadd CONGRATS on this and on the 101 cycles boi

h we want to see a spotlight on you

@spotandjake100 ask someone from https://repl.it/site/about to interview me and post it XD. 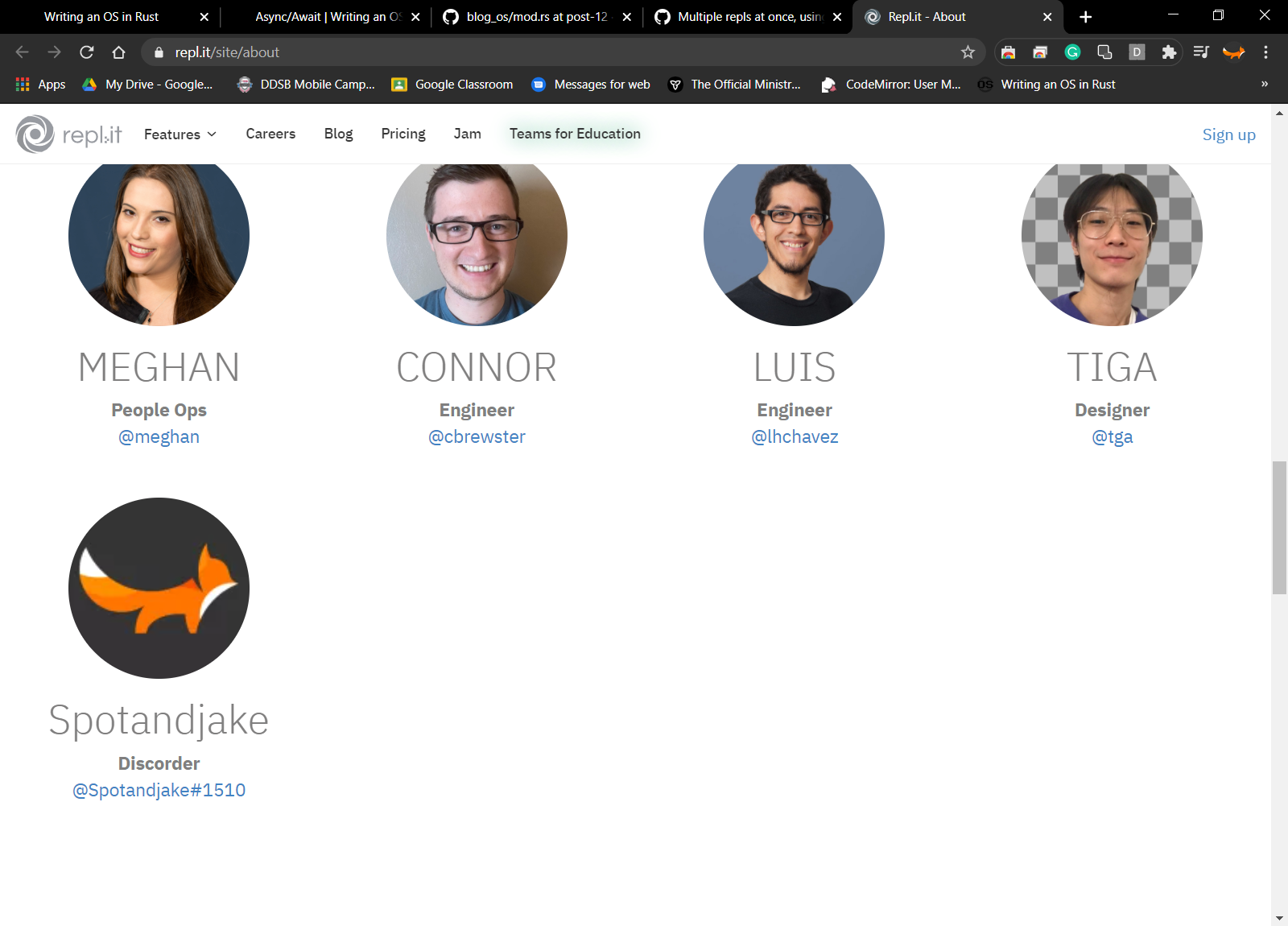 @spotandjake100 can you create a post in announcement board?

@spotandjake100 everyone to see. And because it's you who wants it, it has to be you doing the convincing.

@TheDrone7 okay is aa alowwed to interview you, what about coder100 they are convicing enough to ge ta ton of cycles lol, what about jdog lol.

@Codemonkey51 he can but he wont lol 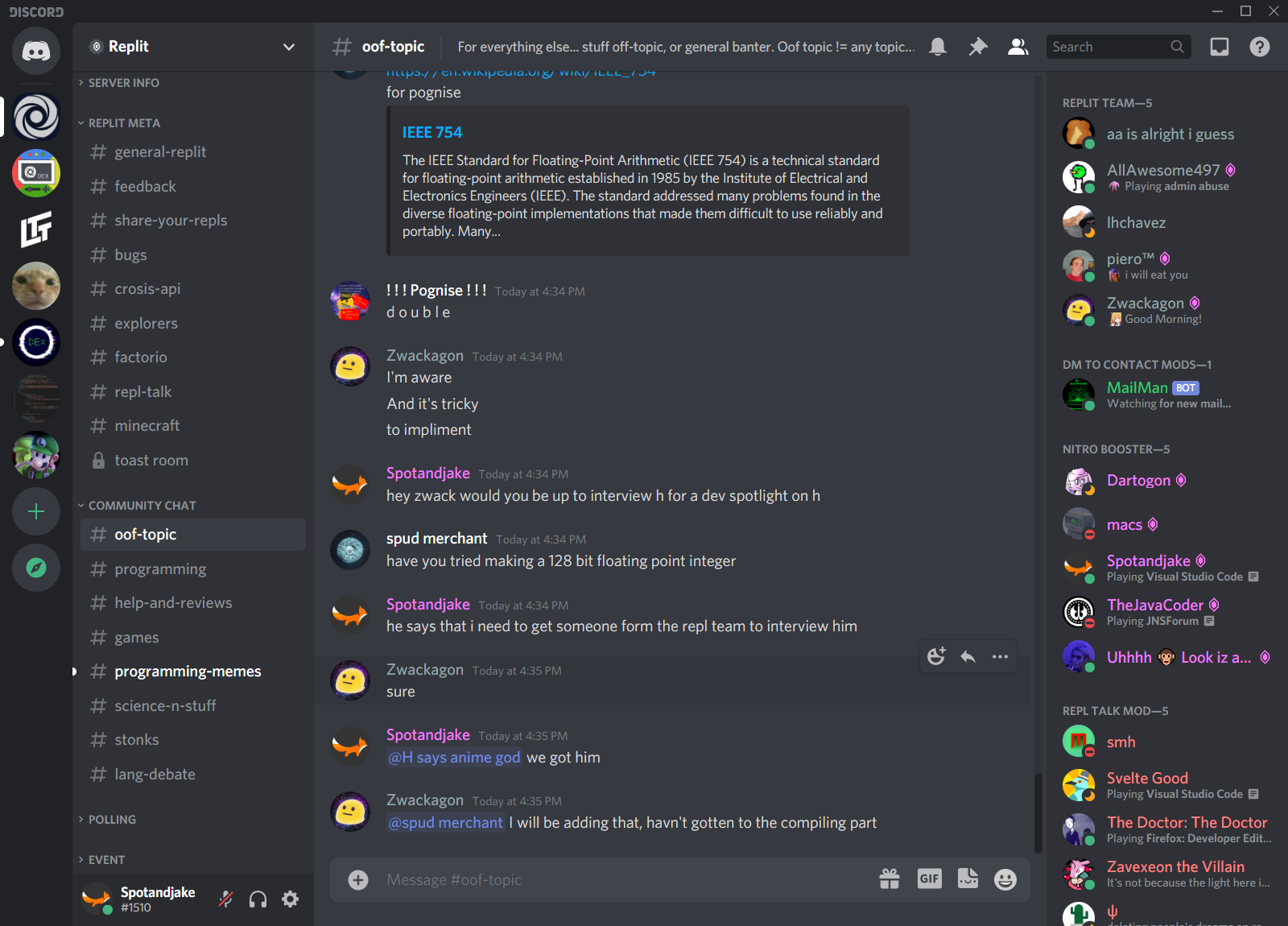 @TheDrone7 we got em boys. so when can we be expecting it, tmr work?

@spotandjake100 Why are you asking me if I'm not the one doing it?

@TheDrone7 @21natzil here interview h like you said you would

lol @TheDrone7 I'll interview you if you want